This is a short game full of random Red Hot Chili Peppers trivia. Have Fun!

Share on Facebook
Share on Twitter
Share by E-Mail
Author
Romanos
Time
5 mins
Type
Multiple Choice
Quiz #
77,758
Updated
Dec 03 21
# Qns
10
Difficulty
Tough
Avg Score
5 / 10
Plays
2413
This quiz has 2 formats: you can play it as a or as shown below.
Scroll down to the bottom for the answer key.

Quiz Answer Key and Fun Facts
1. What album was being made in the documentary Funky Monks?

This video was filmed in a house where the Beatles and Jimi Hendrix once lived.
2. Who was the original guitarist for the Chili Peppers?

Hillel taught Flea how to play bass back in high school.
3. What band did drummer Jack Irons join after quitting the Chili Peppers?

Jack recorded the first three albums with the RHCP and then went on to Pearl Jam.
4. What song did the Chili Peppers record with Tricky?

Great song. Listen to it.
5. Which of these songs were on an actual Chili Peppers LP?

Jungle Man was the first track on the Freaky Styley album.
6. Which Chili Pepper was in the movie Suburbia?

This movie was made in the mid 80s about a bunch of punk rockers. Flea is in his true environment.
7. What is Flea's oldest daughter's name?

Clara was one of the children in the Aeroplane video. Flea's younger daughter is Sunny Bebop.
8. How many members of the band (including all guitarists and drummers)have a tattoo of a squid or octopus?

You can see these tatoos on the Blood Sugar Sex Magik album.
9. Which item were the Chili Peppers not famous for wearing on their heads? (Note: By "head", I mean the one above the shoulders!)

The Chili Peppers are probably most famous for wearing socks, only not on their heads (or feet).
10. Which was not one of Hillel's nicknames?

This quiz was reviewed by FunTrivia editor CellarDoor before going online.
Any errors found in FunTrivia content are routinely corrected through our feedback system.
Most Recent Scores
Jan 14 2023 : Guest 98: 10/10
Dec 15 2022 : Guest 180: 6/10 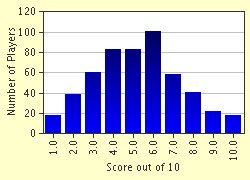 
Other Destinations
Explore Other Quizzes by Romanos