The Red Hot Chili Peppers are one of the most enduring bands from this day and age. See how many questions you can get.

Quiz Answer Key and Fun Facts
1. What was the first ever Red Hot Chili Peppers song?

Andy Gill produce the self titled first album.
George Clinton produced Freaky Styley the second album.
Michael Beinhorn produced Uplift Mofo Party Plan and Mothers Milk the third and fourth albums.
Rick Rubin has produced everything since then.
3. Which of these has been guitarist for Red Hot Chili Peppers?

Krist Novelisc played for Nirvana.
Pete Townshend played for The Who.
Mike Mcready plays for Pearl Jam.
4. Which of these Albums was never released by the band?

"What Hits!?" was released in 1992 and therefore contained a majority of pre-"Blood Sugar Sex Magik" hits.

"Greatest Hits" was released in 2003. It only had hits from Mothers Milk and later. It only shares two tracks with the earlier "What Hits!?"

"Out In L.A." was released in 1994.The tracks contained are varied with the inclusion of four remixes, live cover songs by Jimi Hendrix and Thelonious Monster, demos and joke songs.
5. Which is not a track from "Blood Sugar Sex Magik"?

Higher Ground is from Mothers Milk. It is a Stevie Wonder cover and was the first real mainstream Chili Peppers hit.
6. John Frusciante also releases solo albums. Which is one of his own songs?

Robert Johnson wrote it. Robert Leroy Johnson May 8, 1911 - August 16, 1938 is among the most famous Delta Blues musicians. His exceptional guitar skills and his death at the age of 27 have given rise to much legend. "They're Red Hot" has also been covered by Eric Clapton on his tribute album "Me And Mr Johnson". Richie Kotzen also has his version of this song on his "Bipolar Blues" album.
8. What is Flea's second daughter's name?

Clara is his oldest daughter and the other two I made up.
9. What was the first single from "Stadium Arcadium"?

"Stadium Arcadium" was released in 2006. All four tracks have been released as singles but Dani California was the first.
10. What is the name of the Red Hot Chili Peppers' Stadium Arcadium supporting guitarist? 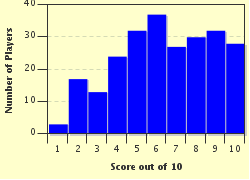 
Other Destinations
Explore Other Quizzes by knoxa