It would be pretty hard to answer these questions if you don't have this CD, but why not give it a go anyways?

Quiz Answer Key and Fun Facts
1. What is the title of the song in which the lyrics are about regretting a breakup? The beginning of this song goes "I didn't mean it when I said I didn't love you so."


Answer: We Belong Together

"We Belong Together" is about a breakup, and wanting to get back together. It stayed number 1 on the pop music charts for 12 weeks. It was ranked number 2 out of all the new music in the year 2005.
2. These lyrics are part of the song "We Belong Together". "When you left I lost _____."


Answer: a part of me

"We Belong Together" was Mariah Carey's comeback song in 2005.
3. The title of this song refers to looking for your one true love.


Answer: One and Only

In "One and Only", Mariah talks about searching for a man to love her and treat her right. She regrets dating guys who lied and cheated.
4. These lyrics come from the song "Shake It Off". Why does Mariah have to 'shake off' her boyfriend?


Answer: 'Cause the lovin' ain't the same

This question pertains to the chorus of "It's Like That." The song is about having a great night and that no one or nothing can bring you down.
6. This line is from the song "It's Like That". "Boy I know you're watchin' me so ______."


Answer: What's it gonna be?

"It's Like That" talks about being on top of the world, and being unstoppable because it's "my night".
7. In the song "Joy Ride", what can "we touch"?

"Joy Ride" is about the pleasure of being with that one special person. The lyrics go "Way up high. A joy ride. We can touch the clouds above. We found love."
8. Finish the lyrics from "Say Something" "You got my mind blown, and baby, _____."

"Say Something" was a duet with Mariah Carey and Snoop Dogg.
9. In the song "Stay the Night" it is asked that you "Just let me rock you ____."


Answer: 'Til the mornin' light

"Stay the Night" is one of the slower songs. It's about spending just a little bit longer together, and staying up all night long, holding each other.
10. "Ever since ya left me, I've been tryin' to hide the pain", is a line from which song?

"Circles" is a track about breaking up. After the breakup, the girl sees her ex with another girl, and becomes hurt. She wished they were still dating.
Source: Author hot_pink 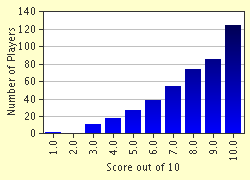 
Other Destinations
Explore Other Quizzes by hot_pink