This superdiva has a dog named Jack and loves shoes! See how much you know about Mimi!

This song was a bonus track from "The Emancipation of Mimi: Ultra-Platinum Edition."
2. Mariah Carey released an album every year of the 90's.

In the 90's Mariah's worst album was the "MTV: Unplugged" album, which sold a hefty nine million copies. She never released an album in 1996.
3. How many weeks did "The Emancipation of Mimi" stay at the top of the Billboard Album Chart?

This album stayed at the top for two weeks. "We Belong Together" stayed at the top of the Hot 100 chart for fourteen weeks.
4. Mariah was the first act to have her first five singles number one on the Billboard Hot 100 Chart.

These first five singles were: "Love Takes Time," "Vision of Love," "Someday," "I Don't Wanna Cry," "Emotions."
5. Which Grammy did Mariah win for her debut single "Vision of Love?"

Not only did Mariah win Best New Artist but she also won Best Female Pop Vocal Performance.
6. In 2006, Mariah had a dog named Mimi.

Mariah has a dog named Jack, and on an episode of "Cribs" on MTV, Mariah pulled another dog, Ginger out of the dryer which led to speculation that she lived there.
7. Mariah has performed a duet with Madonna.

This rerelease is actually a dual disc and contains music videos for most of the songs found on the record.
9. On what date was Mariah's album "Glitter" released?

This album was released on the same day as the World Trade Centers attack which could be a reason for the lack-luster sales.
10. Which song is NOT featured on Mariah's "#1's" cd?

"Lover Boy" was not on this album because it is on the "Glitter" album. This album wasn't released until 2001. The "#1's" cd was released in 1998.
Source: Author soccercks 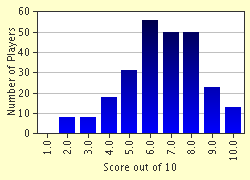 
Other Destinations
Explore Other Quizzes by soccercks