The Life and Times of Mariah Carey Quiz

This quiz about Mariah Carey will cover her personal life as well as career highlights. You will need to have been a fan over the course of her entire career for some questions!

Mariah's mother was an opera singer with the New York City opera and started vocal training with Mariah at around age four!
2. Mariah has one brother and one sister. What are their names?

When Mariah was a teen, Morgan helped her get her demo recorded. At the time he was a personal trainer and knew a few people in "the biz".
3. Which song was a last minute addition to Mariah's debut album?

Mariah wrote the song having just completed recording all the other tracks for the album. She presented it to Sony as a demo for her second album, but they loved it so much, they literally stopped the presses of the album and added it! And it went to number one! This means there are copies of "Mariah Carey" without "Love Takes Time" on it! What a collector's item!
4. On what tv show did Mariah make her debut?

She sang "Vision of Love".
5. For the filming of the video for "Honey" Mariah was required to jump from the second storey of a building into a swimming pool for one of the shots.

While there is a shot just like that in the "Honey" video, it was created through clever editing. Mariah jumped from some crates beside the pool, and a stunt double did the much higher jump from the balcony. All this in Gucci heels!
6. If Mariah was an opera singer, what voice category would one say she has?

A coluratura soprano is known for executing very complicated runs and trills while in a very high range.
7. Mariah has her trademark tattooed on her lower back. What is it?

While the butterfly has become an important symbol in Mariah's life, signifying freedom, she does use temporary tattoos to cover a past mole removal that she says was done poorly!
8. Who is the male vocal in Mariah's rendition of "I'll Be There" in her "MTV Unplugged" performance"

Mariah and Trey met in a recording studio when Mariah was recording. She could hear someone mimicking her every note in the background. After a flustered "who IS that??" they were introduced and became very close friends. Mariah even helped Trey get his own record deal with Columbia.
9. Who did Mariah sing backing for before her big break?

Brenda convinced Mariah to attend a music industry function one evening. Although Mariah was reluctant to go, the promise of free food was too tempting! After some brief introductions, Mariah's demo was snatched up by Tommy Mottola, beginning one of popular music's biggest careers! Mariah still thanks Brenda for being a support.
10. "Bringin' On The Heartbreak" (from the "Charmbracelet" album) is a cover from which band? 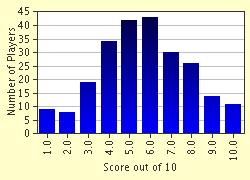 
Other Destinations
Explore Other Quizzes by worthlesspeon