This music quiz is about Mariah Carey. Have fun!

Quiz Answer Key and Fun Facts
1. On what day was Mariah Carey born?

Mariah Carey was born in New York.
2. What was Mimi's first album?

Mariah's CD "Mariah Carey" came out in 1990. This was her first album.
3. Who did Mariah marry and then divorce after five years?

Carey and Mottola married in 1993 and got divorced in 1997. Mottola was Carey's music producer.
4. Which is Mariah's first movie?

Mariah was in this movie, which was produced back in 1999. Her first starring role was in "Glitter".
5. Did Mariah Carey star in the movie "Glitter" ?

Carey attended Harborfields High School in Greenlawn, New York.
7. Did Mimi ever write a song for the movie "How the Grinch Stole Christmas"?

Yes! In fact, she wrote the song "Where Are You Christmas?" which was sung by the little girl.
8. In which year did Mariah receive a Grammy for Best New Artist?

Not only did she receive a Grammy for Best New Artist, she also received one for Best Female Pop Vocal Performance.
9. Did Mimi ever smoke?

At one point in time (as a teenager), yes she did smoke, but she quit because she didn't want it to affect her singing.
10. In what year did Mimi release "The Emancipation of Mimi"?

Mariah released this album in 2005 with three hits off of it. She added three more songs to the CD. Since it was a hit she re-released the CD with her three newest songs.
Source: Author samantha_paige 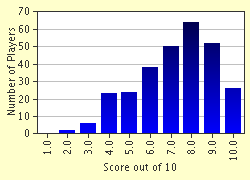 
Other Destinations
Explore Other Quizzes by samantha_paige