All About Mariah Trivia Quiz

This quiz is all about Mariah Carey.

Mariah Carey was born in Long Island, New York, to an African American and Venezuelan father and mother of Irish descent.
2. What age did she begin to sing?

She began singing at age three when her mother started teaching her after Mariah was imitating her mother singing Verdi's opera Rigoletto in Italian.
3. Mariah's Family endured racial slurs.

When she was younger, she and her family endured racial slurs, hostility and sometimes violence because of her nationality.
4. She was always at school.

She was barely at school because of her work as a demo singer for local recording studios.
5. What did Mariah's classmates call her at school?

The reason why they called her that was because she was hardly ever there.
6. Her career started off when she became a back up singer for a Puerto Rican free style singer. Who was this?

When she was a back-up singer, Brenda gave her demo tape to Columbia record executive, Tommy Mottola, who signed Mariah to her contract.
7. What was the name of Mariah Carey's first album?

Mariah co-wrote most of the songs on her first album, which remains one of her best selling albums.
8. Which of her albums had the highest first week sales?


Answer: The Emacipation of Mimi

"The Emancipation of Mimi" was Mariah's comeback onto the music scene after a few years absence. The album sold 404,000 copies in its first week and debuted at number 1 on the US charts.
9. Which of Mariah's first fourteen albums was the worst seller?

Though "Glitter" peaked at the number seven spot on the Billboard 200 charts, it didn't sell as well as her other albums.
10. Is the movie that Mariah made her acting debut called "Shine"? 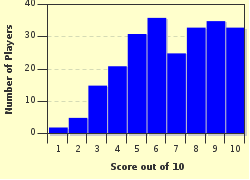 
Other Destinations
Explore Other Quizzes by musikfreak3202