In the beginning there was David Grohl. Then in late 1994 he went at Robert Lang's studio in Seattle and the Foo Fighters were born. This is a quiz dedicated to great band.

Quiz Answer Key and Fun Facts
1. Which Foo Fighters album has the XZ38 Disintigrator pistol on its front cover?

The pistol was pictured on the very first album simply called "Foo Fighters". As it states in the album notes it was recorded between October 12-23 1995, was produced by Barrett Jones, and engineered by Steve Culp. The front cover picture was taken by Jennifer Youngblood who at the time was married to David Grohl.
2. On the self titled first album by the Foo Fighters, David Grohl plays all the instruments and performs all vocal parts with the exception of one track. On which track does Greg Dulli play guitar?

"X-Static" is the tenth track of the album. "This is a Call" is the first and was released as a single. The other two tracks appear on the 2011 "Wasting Light" album. Greg Dulli played guitar courtesy of Elektra records.
3. Which Foo Fighters album released in 1997 contains the tracks "Doll", "Monkey Wrench" and "Hey, Johnny Park!"?


Answer: The Colour and the Shape

Pat Smear left the group shortly after the album was made in 1997 and rejoined the group in 2005. Nate Mendel played bass, William Goldsmith played drums on "Doll" and "Up in Arms" and Lance Bangs provided handclaps on "See You".
5. Which 2002 Foo Fighters album contains the songs "All My Life", "Times Like These", "Low" and "Have It All"?


Answer: One by One

Some of the other tracks on "One by One" are "Disenchanted Lullaby", "Tired Of You", "Halo" and "Lonely As You". The album was produced by Nick Raskulinecz, mixed by Jim Scott and mastered by Bob Ludwig. On the album David Grohl did the lead vocals, backing vocals, rhythm guitar, lead guitar and piano, Nate Mendel was on bass, Taylor Hawkings drums and percussion and Chris Shiflett provided lead and rhythm guitar and vocals on "Danny Says".
6. On one of the Foo Fighters album cover and notes a part of the human body is featured. What vital part of the body is called in the notes as "A Work of Art"?

On the front and back cover there is a heart in black and white. In the inside cover and next to David Grohl's photo there is a colour picture of the heart along with legends that read "Donor Heart", "Who could set a price?!", etc.
7. Which album by the Foo Fighters contains 21 songs on two CDs, one loud and one not so loud?


Answer: In Your Honour

The album was released in 2005. John Paul Jones, of Led Zeppelin fame, played piano on the track "Miracle" and mandolin on "Another Round".
8. On the Foo Fighters album "In Your Honour" which track starts with the lyrics "Can you hear me? / Hear me screaming / Breaking in the muted sky / This thunder heart"?


Answer: In Your Honour

"In Your Honour" goes on to say "Mine is yours and yours is mine / There is no divide / In your honour I would die tonight". David Grohl, Nate Mendel, Taylor Hawkings and Chris Shiflett played on this track.
9. Which Foo Fighters album released in 2007 features the songs "The Pretender" and "Long Road to Ruin"?

Other tracks on the album include "Let it Die", "Erase/Replace", "Come Alive" and "Stranger Things Have Happened". The album was produced by Gil Norton, engineered by Adrian Bushby and mixed by Rich Costey. Foo Fighters personnel on this album were David Grohl, Nate Mendel, Taylor Hawkings and Chris Shiflett. Guests include Pat Smear on "Let it Die", Drew Hester percussion on various tracks and Rami Jaffee on keyboards, also on various tracks.
10. The cover of which Foo Fighters album features the back side of a head with "FF" tattooed on the nape of the neck?


Answer: There is Nothing Left to Lose

"There is Nothing Left to Lose" contains tracks like "Stacked Actors", "Breakout", "Learn to Fly" and "Gimme Stiches". It was released in 1999 and features David Grohl, Nate Mendel and Taylor Hawkings. The album was produced, recorded and mixed by Adam Kasper .
Source: Author gme24 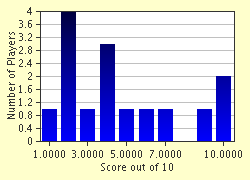 Related Quizzes
This quiz is part of series Rock Music by George:

The subject of these quizzes is Rock Music grouped here for your enjoyment.