This is my first quiz. I hope you enjoy it. This quiz is about the album "21st Century Breakdown".

Quiz Answer Key and Fun Facts
1. What song starts off "I text a postcard, sent to you, did it go through"?

"Last Night On Earth" was the song. It is in "ACT I: Heroes And Cons".
2. "Horseshoes And Handgrenades" includes the lyrics: "Want you to slap me around Want you to knock me out Well you missed me, kissed me Now you you better kick me down".

These lyrics are in "East Jesus Nowhere".
4. What song ends with "sing us a song for me"?


Answer: Song Of The Century

"Song Of The Century" is the first song on the album. It is also the shortest song on it too.
5. What lyrics do the song "Last of the American Girls" NOT include?


Answer: She smashed her knuckles into winter

"She smashed her knuckles into winter" comes off of "!Viva La Gloria!".
6. There are only three ACTs on the album.

The ACTs include "ACT I: Heroes And Cons", "ACT II: Charlatans And Saints", and "ACT III: Horseshoes And Handgrenades".
7. How many parts does the song "American Eulogy" have?

"Mass Hysteria" is the first part and "Modern World" is the second.
8. What two songs start off with the same or similar guitar part?

"21st Century Breakdown" and "See The Light" sound similar for the first guitar notes.
9. Who is the first Green Day member to come in on "Know Your Enemy"?

The drums start out on "Know Your Enemy". Since the drummer of Green Day is Tre Cool, he starts the song.
10. The last song on "ACT II: Charlatans And Saints" is "Restless Heart Syndrome". 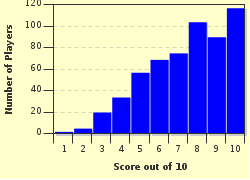 
Other Destinations
Explore Other Quizzes by baddog2086