The series continues. All songs made it to Number One on the U.S. Billboard Hot 100 charts during the 1960s. You might need to furnish either the song or the artist. There may be clues to help you along. Good luck.

Quiz Answer Key and Fun Facts
1. Elvis Presley spent a good portion of the spring of 1960 at the top of the charts with his first number one song of the 1960s. Which one was it?


Answer: Stuck On You

"Stuck On You" was Presley's first single released after his two years in the U.S. Army and spent four weeks at the top of the charts in the spring of 1960. Although it was his first number one hit of the 1960s, it was the thirteenth number one of his career. All the other songs listed were from the 1950s, and were charted prior to Presley's military service.
2. Who rode us to the top of the charts with "Pony Time" in early 1961?

This was Checker's second number one song, following 1960's "The Twist". It was again a song about a new dance step, in which the dancer imitated the motion of riding a horse. The song spent three weeks at number one in the winter of 1961.
3. The one hit wonder "Hey! Baby" was a chart topping hit in 1962. Who sang it?

Channel actually recorded the song in 1961, but didn't release it till 1962. The song stayed at number one for three weeks. Interestingly, Delbert McClinton toured with Channel in 1962, and is responsible for the harmonica rift you hear in the song. They toured at that time with a little known group called The Beatles, and McClinton allegedly gave John Lennon some harmonica tips, which later were used by Lennon during the recordings of "Love Me Do", and "Please Please Me". Too bad for Channel he didn't have the same success.
4. The third straight number one hit for The Four Seasons topped the charts in March 1963. Which of these was it?

It was the legendary Louis Armstrong with his gravelly voice and trumpet that took this song to the top of the charts. "Satchmo" as he was known to his millions of fans, actually recorded this song as a demo to promote the Broadway production of "Hello Dolly".

His record company released the song in early 1964, and it became the biggest song of Armstrong's career knocking off The Beatles and spending one week at the top of the charts. It also earned him a Grammy Award in 1964, for Best Vocal Performance, Male, and another in 1965 for Best Song.
6. 1965 saw the son a famous comedian and his group reach the top of the charts with "This Diamond Ring". Which group accomplished this trick?


Answer: Gary Lewis and The Playboys

Of course it was Gary Lewis, who is the son of world famous comedian and philanthropist Jerry Lewis, who charted this song in 1965 along with his group. The song spent two weeks on top in February 1965. It was written by Al Kooper (who would later go on to major success with the group Blood Sweat and Tears) and remains his most successful song as a songwriter.
7. Nancy Sinatra and her famous father had a number one hit with "These Boots Are Made For Walkin'" in 1966.

All these streets have been used in recordings but it was "Penny Lane", which is a street in Liverpool where Lennon and McCartney used to meet as teenagers, that was used for the title of the group's 1967 number one hit. It remained at the number one position for one week in the U.S. and also climbed to the top spot in the U.K.

It made Rolling Stone Magazine's list of the "500 Greatest Songs of All Time" coming in at number 449.
9. Otis Redding's "(Sittin') On the Dock of The Bay" holds an odd distinction, besides being a number one tune. What is it?

Redding actually co-wrote the song with Steve Cropper during the summer of 1967, while on tour with The Bar-Kays ("Soulfinger"). The song was recorded in November and December of 1967 and completed the overdubbing on December 8, 1967. He died the next day in a plane crash which also took the lives of all but one member of The Bar-Kays.

The song was released in January 1968, and spent four weeks at the top of the charts in late March and early April that year. Although Redding's legacy had already been established as a songwriter when his "Respect" was taken to the top by Aretha Franklin, this song was his biggest success as a singer.

It also appears on Billboard Magazine's "500 Greatest Songs of All Time" at a lofty number 28.
10. These quizzes make my head spin. Last question. Tommy Roe went to the top of the charts in 1969 with what song?

Roe charted with all these songs, but it was "Dizzy" which gave him a number one U.S. hit and his biggest worldwide success. In the U.S. the song remained at the number one position for four weeks in the early spring of 1969. The song also reached number one in the U.K, as well as Canada, and was number two in Australia and number four in Germany. This marked Roe's first U.S. top 10 hit in three years, and the final number one song of his career.


Stay alert. More on the way. If you enjoyed this quiz, please play the others in this series (Vols. 1 through 5) that have already been posted.
Source: Author fredsixties 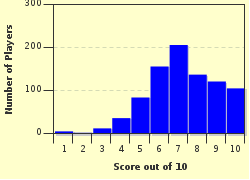 Go to No. 1 Hits Quizzes