Simon and Garfunkel Lyrics Quiz Challenge - How Much Do You Know? | Music

How well do you remember the words to 15 Simon and Garfunkel songs?

The song is entitled 'Like a Bridge Over Troubled Water' and appears on the album of the same name. The Australian parody group Wickety Wak seems to have done a parody of this song, entitled 'My Old Fridge Overflowed with Water.'
2. 'And here's to you, Mrs. _________ ... Jesus loves you more than you will know ... Whoa, whoa, whoa.'

The song is 'A Hazy Shade of Winter' from the album 'Bookends.'
4. 'You can end your daily strife ... At reasonable price ... You've seen it advertised in life, your future's fine now ... Buy the Big Bright _____ Pleasure Machine'

'Richard Cory' from the album 'Sounds of Silence.'
8. The chorus of what song consists of drumbeats interspersed with the syllables 'Lie-la-lie'?

This is from the album 'Bridge Over Troubled Water'
9. What song from 'Parsley, Sage, Rosemary and Thyme' is sometimes called 'Feelin' Groovy'?

From 'Bridge Over Troubled Water'. Simon and Garfunkel spelled the name "Cecilia," but there are many spellings of the name in use.
13. Why does a singer on the album 'Sounds of Silence' have to go 'Somewhere They Can't Find Me'?


Answer: He held up a liquor store

This singer has quite a larcenous streak (or a thing against liquor stores): he also holds up a liquor store in 'Wednesday Morning 3 a.m.' on the album of the same title, Simon and Garfunkel's debut release. 'Somewhere They Can't Find Me' is clearly a reworking of that early song; the situations are the same, but the lyrics are redone. Thanks to player Matwandless for pointing this out!
14. 'At the Zoo,' we find that what animals are reactionaries (while 'antelopes are missionaries')?

According to this song from 'Bookends': 'Monkeys stand for honesty, giraffes are insincere, and the elephants are kindly but they're dumb ...'
15. '____ where my thought's escaping, ______ where my music's playing, _____ where my love lies waiting silently for me'

This is 'Homeward Bound' from 'Parsley, Sage, Rosemary and Thyme'. Thank you for playing!
Source: Author CellarDoor 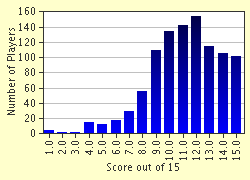 Related Quizzes
This quiz is part of series My Favourite Music:

I started my love of music when I was a teenager listening to these artists. I hope this inspires you to go and have a listen to some darn good music from back then!