Answer these questions about references to literature that are found in Sting's lyrics!

Quiz Answer Key and Fun Facts
1. The second line in a song from The Police called "Bring on the Night" is, "The evening spreads itself against the sky." This is a paraphrase of a line from what famous poem by T. S. Eliot?

The first three lines from Eliot's "The Love Song of J. Alfred Prufrock" are, "Let us go then, you and I, / When the evening is spread out against the sky / Like a patient etherised upon a table." It's certainly an awkward simile spoken by a character who suffers from an inability or an unwillingness to communicate intimately with anyone. Sting admits that he "shamelessly lifted" the line and justified his doing so with more of Eliot's words: "Bad poets borrow, good poets steal." "Bring on the Night" can be found on the 1979 album by The Police called "Regatta de Blanc." Both Eliot's poem and Sting's song incorporate the theme of longing.
2. In "Don't Stand So Close to Me," Sting says of the obsessed teacher: "He starts to shake and cough / Just like the old man in / That book by Nabokov." What book by Vladimir Nabokov is Sting talking about?

Vladimir Nabokov left his native Russia in 1917 following the Bolshevik Revolution and after living throughout other places in Europe settled in the United States during the 1940s. The book he is most well known for is "Lolita," a novel about, as "The Atlantic Monthly" described it, an "affair between a middle-aged sexual pervert and a twelve-year-old girl." The book was so controversial that for three years it went unpublished in the United States.

The song "Don't Stand So Close to Me" can be found on The Police's 1980 album "Zenyatta Mondatta." Before he found success as a musician, Sting worked for a while as an instructor at St. Paul's First School, where he taught eight-year-old boys and girls; he insists the song is not autobiographical.
3. In "Wrapped Around Your Finger," Sting sings of a lover that is presumed to be "caught between the Scylla and Charybdis." To what famous classical piece of literature is Sting alluding?

In Homer's "The Odyssey," Odysseus (or Ulysses) must sail his ship through the Strait of Messina between Sicily and Italy. On one side is the Scylla, and on the other, the Charybdis. To sail safely away from one is to sail too close to the other, and neither is a comfortable choice: the Scylla is a six-headed beast who eats sailors, and the Charybdis is a gaping mouth in the ocean that creates inescapable whirlpools. Odysseus chooses to sail closer to Scylla and, thus, loses only a few men rather than his entire ship. Since "The Odyssey" the phrase has often been used to describe someone caught between the proverbial rock and a hard place. "Wrapped Around Your Finger" is on The Police's 1983 "Synchronicity" album.
4. Later, in the same song ("Wrapped Around Your Finger"), Sting sings: "Mephistopheles is not your name." In what English drama would one find this character?

In Christopher Marlowe's "The Tragical History of Doctor Faustus," Mephistopheles is the demon who confronts Doctor Faustus when he attempts to summon a being from Hell. Mephistopheles eventually becomes the go-between for Faustus and Lucifer as Faustus trades his soul for a limited time of power and knowledge, and he accompanies him on many of his ridiculous excursions.

The Faust legend is certainly much older than Marlowe's play, which was performed for the first time around 1592, and the use of the name "Mephistopheles" for Satan is older than the Faust legend.

Its origin seems to come from several words that when put together mean "not a lover of light." In the UK, "Wrapped Around Your Finger" reached number seven on the charts, and in the US, it reached number eight. "Scylla," "Charybdis," and "Mephistopheles" were introduced to a younger audience that considered literature something alien.
5. Which Police tune was inspired by Paul Bowles's novel, "The Sheltering Sky"?


Answer: Tea in the Sahara

Sting was inspired by a story told by a character within the 1949 novel "The Sheltering Sky" by Paul Bowles. The story concerns three sisters who have only one ambition: to drink tea in the Sahara. So that they can afford their expedition, they try to earn money by dancing in the cafes of Ghardia, but the ugly Algerian men have little money to give to them. One day a handsome young man dances with them, tells them of his home in the Sahara, and then leaves.

The three sisters, however, have fallen in love with him; they determinedly save enough money to buy a teapot and cups and set out on their journey to find him in the Sahara. Of course, tragedy follows . . . .
6. In "Consider Me Gone," Sting points out "Roses have thorns / Shining waters mud / And cancer lurks deep / In the sweetest bud / Clouds and eclipses / Stain the moon and the sun." What famous writer has he paraphrased?

Sting borrows these words from "Sonnet #35" by William Shakespeare. The original lines read: "Roses have thorns, and silver fountains mud / Clouds and eclipses stain both moon and sun, / And loathsome canker lives in sweetest bud." Of course, a canker in early modern English was a particular kind of worm and not a disease, but why split hairs? Cancer is more loathsome and fearsome anyway. "Consider Me Gone" is found on Sting's first solo album "Dream of the Blue Turtles," which was published in 1985. Sting claims that he has always "fancied this title as [his] epitaph."
7. Sting was inspired to write the song "Moon over Bourbon Street" after he read which novel by Anne Rice?


Answer: Interview with the Vampire

"Interview with the Vampire," published in 1976, is Anne Rice's first book in The Vampire Chronicles series. While Sting gives credit to the book for its inspiration, he also admits, "there was one moonlit night in the French Quarter of New Orleans where I had the distinct impression that I was being followed." "Moon over Bourbon Street" is also found on "The Dream of the Blue Turtles."
8. "Sister Moon" contains the following line: "My mistress' eyes are nothing like the sun." Who wrote this line originally?

The line that begins the third verse of "Sister Moon" is the first line of "Sonnet #130" by William Shakespeare. "Sonnet #130" is an anti-Petrarchan sonnet, a kind of sonnet that deliberately ridicules or counters the tendency among Elizabethan and Italian Renaissance poets to exaggerate the god-like beauty of the women they adore. Later in the sonnet, Shakespeare would write such lines as "If hairs be wires, black wires grow on her head," and "And in some perfumes is there more delight / Than in the breath that from my mistress reeks." Furthermore, the woman being described in the sonnet is a dark and mysterious woman that is the topic of the last several sonnets in Shakespeare's sequence. Obviously, this dark subject is what provides a connection between the sonnet and "Sister Moon" for Sting. "Sister Moon" is found on Sting's 1987 album ". . . Nothing like the Sun." Sting claims he recited this line from "Sonnet #130" to a drunk who accosted him one night on Highgate Hill; interestingly, the drunk was calmed by such a response.
9. In "History Will Teach Us Nothing," Sting uses the phrase: "God is dead." Friedrich Nietzsche, of course, created the expression; however, in what philosophical book of his does this statement first appear? (Be careful!)

Nietzsche first mentions "God is dead" in "The Gay Science" even though it would be "Thus Spake Zarathustra" that brought the statement to everyone's attention and thus to the height of controversy. The statement is so often misunderstood. Nietzsche never meant that God, the being, had died or ceased to exist.

He simply meant that humanity in the modern age no longer had any use for the idea of God or any god, for that matter. The belief in a god had outlived its usefulness. However, Sting very wisely counters this point of view, for apparently people will have their God. If one idea of God ceases to hold prominence, it is simply replaced by another one among people, and what replaces the original idea may be worse than the first, especially if those people are subject to being influenced by fear and other emotions. Sting sings, "If God is dead and an actor plays his part / His words of fear will find their way to a place in your heart." "History Will Teach Us Nothing" can be found on the ". . . Nothing like the Sun" album.
10. In what song by Sting would one find the following words: "I've been to every single book I know / To soothe the thoughts that plague me so"?


Answer: Be Still My Beating Heart

"Be Still My Beating Heart" is from Sting's second solo effort ". . . Nothing like the Sun." The singer in this song suffers from a broken heart yet finds himself beginning to feel passion for someone else. He is afraid to risk love again and is seeking solace for his confusion and pain in the pages of books! Similarly, the speaker in Edgar Allan Poe's "The Raven" turns to books as well to attempt to handle his grief at the loss of his loved one Lenore.

However, in that poem as well as in this song, "logic has drowned in a sea of emotion."
Source: Author alaspooryoric 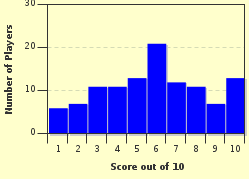 
Other Destinations
Explore Other Quizzes by alaspooryoric