The Dark Side of Springsteen Trivia Quiz

Bruce Springsteen has written some of pop music's most disturbing songs. Each statement below describes something that happens to a character in a song. Tell me which song it is I'm describing.

Quiz Answer Key and Fun Facts
1. Serial killer wants his girlfriend to sit on his lap as he's fried in the electric chair.

This song is based on the Charles Starkweather murder spree.
2. A man asks a judge to have him executed after killing a night clerk.

From the 'Nebraska' album.
3. A killer tells his victim 'Remember my name before you die,' says his name, and then shoots him in the face.

Unreleased song. You'd have to be a big Bruce fan to get this one.
4. The last words of this nasty song are 'My Jesus, your gracious love and mercy tonight I'm sorry could not fill my heart like one good rifle, and the name of who I ought to kill.'

The character is a homeless man who wants to kill the man who killed his friend.
5. At the end of this song, a young Mexican hustler gets hit by a car, limps to his blanket beneath an underpass, and lies there dying, tasting blood on his tongue.

Typically brutal song from 'The Ghost of Tom Joad.'
6. KKK members burn down Vietnamese shrimp {boats;} a Vietnamese man shoots some of them in self defense.

The last story on the 'Tom Joad' album.
7. A Vietnam veteran stands in the middle of a black river, staring at the lights of his town.


Answer: 'Shut Out The Light'

This was released as the B-side to 'Born in the U.S.A.'
8. A man claims he could only feel 'the drugs and the shotgun and my fear inside of me' when he killed innocent people.

The song was used in the film of the same name.
9. The narrator of this song says he hopes to go to Hell when he dies.

From the 'Tom Joad' album.
10. A young Mexican man is cooking methamphetamine when the shack he's in explodes. He is laid to rest by his brother. 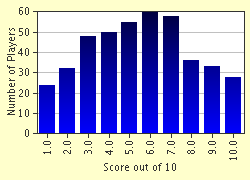 
Other Destinations
Explore Other Quizzes by benny1