Hi all you Springsteen Fans. I hope you enjoy this little quiz. Diehard fans like me will find it a breeze. If you're not up on your Springsteen Facts, then watch out... this one will be tough!

Springsteen tells a story during an old live show taped at the Bottom Line in NYC about his parents thinking he should be an author or a lawyer because he could 'get a little something for himself'
2. In the song Thunder Road what is the woman's name who Bruce urges to run away with him?

The girl's name is Mary and the lyric most recalled is 'So Mary climb in, this is a town full of losers and I'm pullin' outta here to win!'
3. What is the name of the drummer for the E Street band?

Max Weinberg is also know as the leader of the band on the Conan OBrien Show. The band is called the Max Weinberg Seven
4. Which one of these songs was NOT written by Bruce Springsteen?

Several of Springsteen's original songs were hits for other acts. Manfred Mann covered Blinded By The Light, The Pointer Sisters did Fire and both Patty Smith and 10,000 Maniacs had hits with Because the Night.
5. Who wrote of Bruce 'I have seen the future of Rock-n-Roll and his name is Bruce Springsteen' ?

Jon Landau went on to become producer on several Springsteen albums
6. What are on the walls in 'Candy's Room' ?


Answer: pictures of her heroes

The lyric is In Candy's room there are pictures of heroes on her walls, but to get to Candy's room you've got to walk the darkness of Candy's halls. The song is on the Darkness on the Edge of Town album.
7. There has actually been a movie made based on a song Bruce wrote. The movie was based on the song Highway Patrolman. Who directed it?

The movie starred David Morse and Viggo Mortenson and was the story of a cop and his troubled brother, just like in the song. The song is on Nebraska. The movie is called The Indian Runner.
8. What is the name of Springsteen's first wife?

Springsteen was briefly married to actress Julianne Phillips who starred on the series Sisters.
9. What is the name of the bar in New Jersey that Springsteen was known for showing up at and playing surprise gigs...even after he became hugely famous?

For many years Springsteen frequented the Stone Pony and played several unannounced shows there.
10. Which one of the E Street Band members is a cast member on the HBO series The Sopranos?

'Little Steven' Van Zandt plays Silvio on the Sopranos and does a great Al Pacino impression for all the boys at BadaBing!
11. Name the song whose lyrics include such characters as: the Magic Rat, the Rangers and the Maximum Lawmen

Jungleland is the last track on the Born to Run album and has been compared to opera in its drama and beauty
12. What song of Bruces was used by Jonathan Demme for a motion picture soundtrack of a film Demme made?

Springsteen won an Oscar for his song from the movie Philadelphia
13. What is the nickname of Springsteen's friend and sax player Clarence Clemmons?

Clemmons is a really big guy and has always been lovingly referred to as Big Man
14. What is the name of the woman Springsteen tells to jump a little lighter?

Rosalita is the girl who is jumping out of her window and into Bruce's arms. She has to sneak out of the house to be with him because her parents don't approve of him.
15. Springsteen put out an album whose title included the name of a fictional character from a classic novel. What was the name of the book the character was from?


Answer: The Grapes of Wrath

The title of the album was The Ghost of Tom Joad. Tom Joad is a character in The Grapes of Wrath
Source: Author hungreee 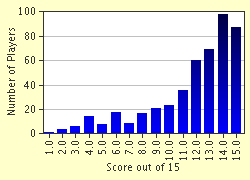 
Other Destinations
Explore Other Quizzes by hungreee