The Songs of Bruce Springsteen Quiz

While Bruce Springsteen has sold millions of albums, and has written hundreds of great songs for himself, he has also written many songs that others have covered -- and in some cases, these songs have been career defining classics for these artists.

Quiz Answer Key and Fun Facts
1. "Cut loose like a deuce, another runner in the night," is the refrain Bruce wrote that follows the words, "Blinded by the Light" ... though perhaps you thought the lyric was "wrapped up like a douche"? Regardless of what you've thought you've heard, what is the name of the band that had a huge hit with "Blinded by the Light" in the seventies?

This song was Bruce's first single, and appeared on his first album, "Greetings from Asbury Park, N.J." When his autobiographical "Best Of" album, "Chapter and Verse" was released in 2016 no Bruce Springsteen released single has reached Number one on the Billboard Hot 100, though this cover by Manfred Mann did reach number one in February of 1977. Manfred Mann also covered two other Springsteen songs: "Spirit in the Night" and "For You".
2. While "Pink Cadillac" was the B-sIde of 1984's "Dancing in the Dark", Bruce did not find room for this song on any of his own studio albums until he released the 1998 rarities collection "Tracks". In the meantime, another singer recorded this song, and it became one of the biggest songs of her career. Who is this second generation "royal" singer?

Natalie is the daughter of the great Nat King Cole, and is fondly remembered for her 1991 album "Unforgettable... with Love", which was a collection of re-recorded songs that had previously been done by her late father. Prior to the release of this blockbuster, Natalie's cover of "Pink Cadillac" revived her career which had stalled in the eighties.
3. "From Small Things (Big Things One Day Come)" was an outtake from the sessions for the Bruce Springsteen album "The River" and a single culled from the album "D.E. 7th". Who recorded this album?

While Springsteen's version of "From Small Things..." was not released until the 2003 compilation album "The Essential Bruce Springsteen", Edmunds' version of the song reached number 28 on Billboard's Mainstream Rock Tracks chart in 1982. Helped by the Springsteen written lead single, "D.E. 7th" has been Edmunds' highest-charting solo album in the US as of June of 2017.
4. "Talk To Me", "Hearts of Stone", and "The Fever" are among the many Springsteen-penned songs that this artist has recorded. The lead singer of this band, like Bruce, is from the state of New Jersey. What's the name of his band?

The bulk of the songs from Southside Johnny's first three albums were written by E Street Band guitarist Steven Van Zandt, or by Springsteen himself. While his third album, "Hearts of Stone" was highly regarded by critics (Rolling Stone placed "Hearts of Stone" as #93 among the top 100 albums from 1967-1987), Southside Johnny never really had the kind of mainstream success that one might expect, given the songwriters who were providing him with material. Starting with his fourth album, 1979's "The Jukes", Southside Johnny moved away from covering Springsteen and Van Zandt songs, unfortunately, this decision to chart a more independent path failed to increase his audience.
5. The legendary artist has covered numerous Bruce Springsteen songs, including "I'm on Fire", "Highway Patrolman" and "Further On (Up the Road)". In addition, the title track of his 1983 album is the Springsteen song "Johnny 99". Who is this inductee of the Country Music, Rock and Roll, and Gospel Music Halls of Fame?

"Johnny 99" was the 69th album by Johnny Cash. When his daughter, Rosanne Cash, met Bruce Springsteen for the first time, he told her how pleased he was with Johnny's cover which was on the Springsteen album "Nebraska". She retorted with, "who do you think sent him "'Nebraska'"?
6. "Light of Day" was a 1987 movie starring Michael J. Fox, and a song written by Bruce Springsteen, "(Just Around the Corner to the) Light of Day", was prominently featured in this film. Fox's co-star, and on-screen sister, was played by a musician who played the song on the soundtrack. What part time actress (and full time rock and roller) performed this song?

"(Just Around the Corner to the) Light of Day" was originally recorded by Bruce in 1983, but as of June of 2017, that studio version of the song has not yet been released. A live version of "Light of Day" can be found on Bruce's "In Concert/MTV Plugged", a 1993 album that was recorded during his non-E Street Band era.

The Joan Jett led band in the movie, The Barbusters, recorded a version of the song that peaked at number 33 on the US Billboard Hot 100 chart.
7. This singer is best known for the song "Quarter to Three", a song Bruce covered repeatedly throughout the seventies. In return, Bruce gave this singer a number of songs for him to record, including "This Little Girl", "Dedication", "Rendezvous" and "Out of Work". Whose career received an early eighties resurgence when he recorded these Bruce Springsteen written songs?

No Bruce Springsteen concert would be complete without him playing at least a few rock and roll classics from other artists, and "Quarter to Three" was often the last encore he would play at his shows during the seventies. Check out Bruce's album "Hammersmith Odeon, London '75" to hear this brilliant cover.
8. This group has had a number of popular songs, including "He's So Shy", "Jump (for My Love)" and "I'm So Excited", but their first certified Gold single was a Bruce Springsteen song entitled "Fire". Who took this song to the #2 spot on the US Billboard chart?

Springsteen's live recording of "Fire" is on his box set "Live 1975-1985", and there's a studio version on 2010's "The Promise", which is an album of previously unreleased songs dating from 1976 through 1978. This was an incredibly prolific period for Bruce as a songwriter, but due to a dispute with his then-manager, he was unable to record any albums between 1975's "Born to Run", and 1978's Darkness on the Edge of Town".
9. What glam rocker covered the Bruce Springsteen songs "It's Hard to Be a Saint in the City" and "Growin' Up"? Hint: these songs were originally recorded during sessions for the albums "Station to Station" and "Pin Ups", and later released as either bonus tracks or on compilation albums.

According to Bowie's producer, Tony Visconti, there was a very tense meeting between Bowie and Springsteen when Bowie played his version of "It's Hard to Be a Saint in the City" for Bruce. Said Visconti, "We played 'Saint' to him and he kept a poker face the whole time.

He said nothing when it was finished." Visconti never worked on the song after that, though eventually it was finished with another producer and released on Bowie's 1989 box set "Sound + Vision".
10. This last song is more of a collaboration than a cover. Bruce wrote the melody and the majority of the lyrics for the song "Because the Night", before eventually discarding it while recording the album "Darkness on the Edge of Town." This was a huge break for this singer, who finished the lyrics for "Because the Night", and it became the most widely known song of her career. Who is this punk rock icon?

In 1978, Jimmy Iovine was simultaneously Bruce's engineer on "Darkness on the Edge of Town", and the producer of The Patti Smith Group album "Easter", which was being recorded in an adjoining studio. Bruce decided that "Darkness" didn't need another love song, so Iovine took the song to Patti, who finished the lyrics and it gave this punk outsider an opportunity to achieve mainstream success. Fifteen years later, 10.000 Maniacs recorded this song for their live album "MTV Unplugged", and this version also was a big hit single.
Source: Author impdtwnaa 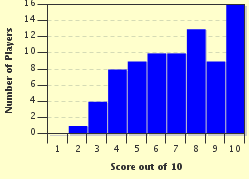 
Other Destinations
Explore Other Quizzes by impdtwnaa