A Bunch of Clives Trivia Quiz

It's not the most popular name any more, but there are still quite a few well known Clives out there. See if you can match the surnames to the descriptions. Note: UK bias.

The death of Clive Staples Lewis was rather overshadowed by the assassination of the American president. C. S. Lewis, as he was styled as an author, created the magical world of Narnia, accessed through the back of a wardrobe.
2. Former rugby union player and coach of England's national World Cup winning team

Sir Clive Woodward, as he became, played centre for England between 1980 and 1984. After his playing career, he took up coaching and became coach of the national team in 1997. Woodward was in charge of the team when they became World Champions in 2003, beating Australia in the Rugby World Cup final, held in Sydney.
3. British inventor and pioneer of home computers

Sir Clive Sinclair brought home computing within the reach of many British people with the introduction of the ZX80 and then the ZX Spectrum in the 1980s, which some of us are old enough to remember. An earlier success for Sir Clive was the introduction of a pocket calculator in 1972.

It's fair to say that the Sinclair C5 battery operated vehicle was not a high point of his career, though.
4. Television presenter and former barrister

Clive Anderson's most successful show was 'Whose Line is it Anyway?', which ran from 1988 until 1999. It began on radio, in January 1988, also with Anderson as its host and an American television version began in 1998. Anderson qualified as a barrister, and worked in criminal law, until turning his attention to comedy, and he has also hosted talk shows, proving to be quite provocative - the Bee Gees walked out on him and Richard Branson threw a glass of water over him.
5. Welsh born former trade union leader and political activist

Even if you don't remember Clive Jenkins, the Welsh surname might have helped. He became an official of the Association of Supervisory Staff, Executives and Technicians (ASSET) when aged only twenty, and was also a Communist Party member at the time. Jenkins was shrewd enough to use television and other media to his advantage, appearing regularly on chat shows.

When the Labour government, led by Harold Wilson, took power in 1974 Jenkins was appointed to the National Research and Development Council.

Clive Dunn will be remembered for his portrayal of Corporal Jones in the television series 'Dad's Army', which ran originally on the BBC from 1968 until 1977. It is repeated regularly. This was far from his only acting credit, of course. Dunn also hit the top of the UK Singles Chart in 1971 with the song 'Grandad'.
7. American novelist; created Dirk Pitt

Our sole American Clive in this quiz, Cussler has written numerous adventure novels with the character Dirk Pitt featuring in many of them. Cussler also founded the National Underwater and Marine Agency (NUMA), devoted to finding wrecks and items from the sunken ships. NUMA was originally created as a fictional organisation in Cussler's books, before he decided to set up the real thing, funded primarily from his book sales.
8. West Indian former test match cricketer and captain

Lloyd was the captain of the West Indies team when they were at their peak, destroying most of the teams they played against. He was in charge from 1974 until 1985, having begun his career in Test cricket in 1966.
9. Australian born writer and broadcaster; 'Unreliable Memoirs'

Clive James was born in Sydney in 1939 and moved to the United Kingdom in 1962. He worked for The Observer, a Sunday newspaper, as their television critic and also wrote for various other publications as a literary critic. James has published collections of poetry and other works, with a series of autobiographical books including 'Unreliable Memoirs', published in 1980.
10. English actor; television and films; 'King Arthur'

Clive Owen first came to the attention of many in the UK when he had a starring role in 'Chancer', an ITV drama series which began in 1990. He then made his mark in Hollywood, with roles in 'Croupier' (1998) and 'Closer' (2004). Clive also starred in the 2004 film 'King Arthur', playing the title role, and his career continues on both big and small screen, with a leading role in the American television series 'The Knick'.
Source: Author rossian 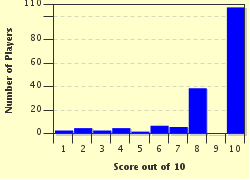 Related Quizzes
This quiz is part of series What's in a Name:

Each of the quizzes in this list has a name as its theme.


1. A Bouquet of Herbs Easier
2. A Bunch of Clives Easier
3. Flying to the Boundary Average
4. Jolene Easier
5. Noel - not just for Christmas Average
6. Please Don't Eat Me Average
7. Questions about 'Q' People Average
8. The Book of Samuel Easier
9. The Campbells Are Coming Average
10. The Fabulous Baker Boys (and Girls) Average
11. You Could Call Me Red Average
12. Zed People Easier