Or, if you're American, Zee People. Since the quiz is about the British, or people with British connections, Zed is probably more accurate. All the questions are about people with a 'z' in their names.

Quiz Answer Key and Fun Facts
1. Zac Purchase has represented Britain, sometimes alone and at other times with a partner, in which outdoor sport?

Zachary Jake Nicholas Purchase, to give him his full name, has had much success as a rower, specifically in sculling. This means that a single rower controls oars on both sides of the boat. In partnership with Mark Hunter, Purchase won the gold medal at the Beijing Olympics in 2008 but the pair had to settle for silver four years later, when the Danish pair of Mads Rasmussen and Rasmus Quist Hansen just beat them.
2. Zoe Ball followed in her father's footsteps by becoming a television presenter. What was his first name?

Zoe has presented many radio and television programmes, including 'The Radio One Breakfast Show' and 'The Big Breakfast', on Channel 4 television. Johnny made his name presenting shows for children, in particular in shows designed to make mathematics fun - yes, really.

His first show on this theme, 'Think of a Number', ran for six series from 1978 until 1984 and was followed by several others. Both Zoe and Johnny have appeared on 'Strictly Come Dancing', although not in the same series. Zoe was rather more successful, finishing third, while her father was the first one to be eliminated in his series.
3. Elizabeth Emanuel, in partnership with her then husband, David, designed the wedding dress worn by which bride when she married into the Royal family?

David and Elizabeth opened their own salon in 1977, and Lady Diana Spencer was one of their regular clients. Diana chose them to create the dress she wore for her wedding to Prince Charles, in 1981, at St. Paul's Cathedral. The dress itself, made from silk taffeta and antique lace, is normally on display at Althorp House, the ancestral home of the Spencer family. Kate Middleton's dress for her wedding to Prince William was designed by Sarah Burton, in 2011. Sarah Ferguson wore a Lindka Cierach creation when she married Prince Andrew. Samantha Shaw was the designer of the dress worn by Sophie Rhys-Jones when she married Prince Edward in 1999.
4. Mackenzie Crook appeared in the television series 'The Office' before taking the role of Ragetti in which film series?


Answer: Pirates of the Caribbean

Mackenzie, whose real name is Paul James Crook, played the part of Gareth Keenan in the original, UK, version of 'The Office' between 2001 and 2003. He then landed the part of Ragetti, one of the crew members of The Black Pearl, in 'Pirates of the Caribbean'. Crook played the role in the first three films in the franchise, 'The Curse of the Black Pearl' (2003), 'Dead Man's Chest' (2006) and 'At World's End' (2007).

The character, alongside that of his main 'partner', Pintel (played by Lee Arenberg), did not feature in the fourth film, 'On Stranger Tides' (2011).
5. Remembered for her hit 'Will You' in 1981 and her appearance in the film 'Breaking Glass' in 1980, Hazel shares which surname with Sinead and Des?

The film 'Breaking Glass' came out in 1980 and also starred Phil Daniels and Jonathan Pryce. The soundtrack album featured Hazel singing 'Will You', and the single reached number eight on the UK Singles Chart in 1981. She also sang on the charity version of 'Let it Be', recorded to support victims of the Zeebrugge ferry disaster in 1987. Des O'Connor is probably best known for being the butt of many of Morecambe and Wise's jokes, although he is a comedian, television presenter and singer in his own right. Sinead O'Connor is a well known and successful singer, but none of the O'Connors is related to the others.
6. Dubbed 'Jezza' by the British press, Jeremy Clarkson began presenting the television show 'Top Gear' in 2002. Which of these does NOT make regular appearances on the show?

Although a show of the same name had been running since 1977, the BBC had cancelled it until Clarkson suggested a revamp, making it more humorous. Although the show still carried out car testing, this became a minor part of the output, with the presenters undertaking various challenges, such as building an amphibious vehicle. Richard Hammond was a co-presenter from 2002, while James May joined the following year.

The Stig, whose identity is not revealed, is described as being the show's 'tame racing driver'. Jason Plato is a presenter on 'Fifth Gear', another motoring show, which began on Channel 5 in 2002.
7. Catherine Zeta-Jones co-starred with Antonio Banderas and Sir Anthony Hopkins in which 1998 film?


Answer: The Mask of Zorro

I couldn't resist choosing a film with another letter zed in it. Catherine played the part of Elena Montero, daughter of Don Diego de la Vega and the original Zorro (portrayed by Hopkins). Banderas played Alejandro Murietta, who marries Elena and inherits the mask of Zorro when the original character dies. Banderas and Zeta-Jones revisited their roles in 2005 in the follow up film 'The Legend of Zorro'. All the films listed appear on Catherine's CV.
8. Although not British born, Suzi Quatro has lived in the UK for many years, making her an honorary Brit. She appeared on which iconic American television show in the late 1970s?

Suzi was born in Detroit, but has lived in England since the age of twenty-one, with most of her musical career spent in the UK, so she just about fits in this quiz. She was one of the first female rock stars and her habit of wearing leather (at least on stage) led to her role as the character Leather Tuscadero in 'Happy Days'. Suzi's hit records in the UK include 'Can the Can', '48 Crash' and 'Devil Gate Drive' in the early 1970s.
9. Zara Phillips, daughter of the Princess Royal (Princess Anne), has represented Great Britain at the Olympic Games in which sport?

Since both her parents, Mark Phillips and Princess Anne, were well known equestrians it is probably unsurprising that Zara followed the same path. On the other hand, her brother Peter seems to have avoided horses. Zara has had a successful career in Eventing (a combination of dressage, cross country riding and show jumping), winning gold medals in both World and European Championships.

At the Olympics she was a member of the team which won the silver medal at the 2012 London games.
10. Frazer Hines appeared on our television screens as Jamie in Doctor Who, and also played Joe Sugden in which bucolic soap opera?

Frazer played the part of Jamie McCrimmon, assistant to the Second Doctor, portrayed by Patrick Troughton. He appeared on the show between 1966 and 1969 and has returned to make guest appearances on later episodes, in 1983 and 1985. Hines first appeared as Joe Sugden in Emmerdale Farm, as it was then named, in 1972 and continued in the role, with a couple of short breaks, until 1994.

The character was killed off in 1995.
Source: Author rossian 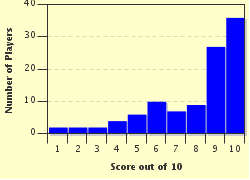 Various quizzes about people from or associated with the United Kingdom.