No leopards in this quiz, but the people in it all share their surnames with living creatures. It could be called 'That's No Leopard' or 'That's No Other Animal Either'.

Pyke became a well known public figure following his appearances on television programmes such as 'Don't Ask Me' and 'Don't Just Sit There'. Although he appeared eccentric, and had an idiosyncratic presenting style involving much windmilling of his arms, Pyke did much to make science accessible to the general public. Pyke was featured on both the record and video for Thomas Dolby's 1992 hit 'She Blinded Me with Science', which can be found on various internet sites.
2. James Wolfe was a British military hero, who lost his life in a battle near which city?

Wolfe died as a result of injuries sustained in the Battle of the Plains of Abraham, or the Battle of Quebec as it is sometimes known, in 1759. He was the leader of the British forces which besieged and then defeated the French who were holding the city of Quebec.

The French leader, Montcalm, was also killed in the battle. A painting by Benjamin West, called 'The Death of General Wolfe', depicted his passing and helped to maintain his fame. Khartoum saw the death of Major General Gordon in 1885. Gallipoli was a battle in World War One and the Battle of New Orleans, in 1815, was a decisive battle in the War of 1812.
3. The Fox family was a well known acting dynasty in the UK. Which of them played the role of the assassin known as 'the jackal' in the 1973 film 'The Day of the Jackal'?

Theatrical agent Robin Fox fathered three sons, Edward, James and Robert. Both Edward and James became actors, while Robert became a film producer. Edward's children Emilia and Freddie have followed him into the acting profession, while Laurence Fox, son of James, is also an actor. Edward played the role of the jackal in 1973, and his other film credits include 'Battle of Britain' from 1969 and 'Prince Valiant' (1997) in which he played the role of King Arthur.
4. This actor first appeared as Charles Robinson, Chief of Staff to Judi Dench's character M, the 1997 film 'Tomorrow Never Dies'. What was his 'fishy' surname?

Colin Salmon appeared in two further Bond films, playing the same role. Pierce Brosnan played Bond in all of the films featuring Salmon, with the other two being 'The World is Not Enough' (1999) and 'Die Another Day' (2002). Salmon first made his mark in the television series 'Prime Suspect 2' in 1992 (in the UK) when his character had an affair with Jane Tennison, played by Helen Mirren. Salmon has also appeared in many television shows and films, especially those made in Britain.
5. Douglas Hogg was a well known public figure in the UK during the 1990s and 2000s. In which field did he make his mark?

Douglas Hogg became Lord Hailsham of Marylebone in 2001, the third holder of the title after his father and grandfather. All three of them were prominent Conservative Party politicians, with Douglas Hogg being a Member of Parliament between 1979 and 2010.

He did not stand for re-election in 2010, having been implicated in the expenses scandal of 2009. It was widely reported that Hogg had claimed Parliamentary expenses for the cleaning of his moat, an allegation which he denied.
6. Sir Francis Drake was an explorer, and adventurer, during the reign of which British monarch?

Drake was born in Devon around 1540 when Henry VIII was still on the throne, but would have been aged only about seven when Henry died in 1547. In 1567, he was on the ship which transported the first slaves from Africa to the Americas. Drake was a privateer - an individual authorised by the government to attack enemy ships, although the Spanish, who suffered greatly at his hands, viewed him as a pirate. Between 1577 and 1580 Drake became the first Englishman to circumnavigate the globe, and was knighted by Queen Elizabeth as a result in 1581.

His final years were less successful, though, with a failed attempt to take San Juan, Puerto Rico from the Spanish in 1595. Drake died soon after, from dysentery, in early 1596. James I and Charles I were both seventeenth century monarchs.
7. Mike Catt and Dusty Hare both represented England at international level in which sport?

Although he was born in South Africa, Catt had an English mother so qualified to play for England where he has lived since leaving school. He played for England between 1994 and 2007 in every position in the backs, apart from scrum half. He was also a member of the World Cup winning team in 2003. Dusty Hare played full back for England from 1974 until 1984, and also toured New Zealand in 1983 as a member of the British Lions. Hare was also a talented cricketer, who played for Nottinghamshire, but did not reach international level.
8. Born Robert Simpson, this man became known as a comedian, actor and television presenter after changing his name. He adopted Rufus as his first name and which canine related second name?

Rufus Hound popped up regularly on British television in the early part of the twenty-first century. He starred in 'Hounded', set in a parallel universe, on CBBC (for children) and also hosted 'OutTake TV' on BBC1. Hound is a regular panellist on 'The Apprentice: You're Fired' and is also a regular on the radio. Among his more memorable appearances was on 'Let's Dance for Comic Relief', which Hound won in 2010 while performing 'Fight for this Love' while dressed up as Cheryl Cole.

This is available on the internet, if you really want to see it.
9. The singer of 'Kiss from a Rose' shares his name with which of these creatures?

Seal Henry Olusegun Olumide Adeola Samuel was born in London to a Nigerian mother and Brazilian father. His first hit was 'Crazy' (not the Patsy Cline song) in 1990, which reached the top ten in both the UK and USA. Seal was also the vocalist on music producer Adamski's 1991 hit 'Killer'. 'Kiss from a Rose' was another big hit in 1994 reaching number one on the US Billboard Hot 100 and number four on the UK Singles Chart. Seal was still recording in the early twenty-first century, and his albums, in particular, were still achieving good sales.
10. She famously described him as 'mad, bad and dangerous to know'. He was Lord Byron. She was Lady Caroline ____?

Lady Caroline Lamb met Byron in 1812 when she was aged twenty-seven, and married, and he was twenty-four. They soon became lovers, with Byron being particularly demanding of her time and affection. He proved to be more interested in the chase, though, and once Caroline succumbed he quickly lost interest in her. Caroline remained obsessed by Byron, though, and humiliated herself by continuing to pursue him.

She died in 1828.
Source: Author rossian 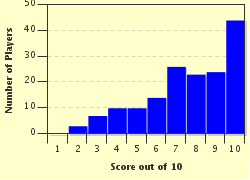 The second batch of quizzes I've written for commission. The original list was getting too long, so has been split into more manageable sections.