This quiz was prepared in response to an author quiz challenge. Thanks to spanishliz for setting the challenge of 'Adams and Eves'. Select the correct 'Eve' or 'Adam' for each of the questions below.

Share on Facebook
Share on Twitter
Share by E-Mail
Author
Chucklemel
Time
4 mins
Type
Multiple Choice
Quiz #
363,815
Updated
Dec 03 21
# Qns
10
Difficulty
Average
Avg Score
7 / 10
Plays
441
This quiz has 2 formats: you can play it as a or as shown below.
Scroll down to the bottom for the answer key.

Quiz Answer Key and Fun Facts
1. This Eve played the middle sister, Jan, in the TV series "The Brady Bunch".

'Marcia, Marcia, Marcia' - Jan clearly had some middle sibling issues! While Eve has appeared on both TV and stage since 'The Brady Bunch' (and a number of spinoffs) ended, and has also achieved some success as an artist, her role as Jan Brady looks to remain her most memorable.
2. This Adam is an actor who starred on TV in the 1960s as a superhero, and more recently voiced the Mayor on 'The Family Guy'. With a BIFF and a POW, quickly tell me the name of this actor.

Yes, Adam West played Batman from 1966 to 1968. He has garnered a new generation of fans with his voice-over work in recent years, most notably as the Mayor of Quahog on the animated TV series, 'The Family Guy'. In 2012, West was honored with the 2,468th star on Hollywood Boulevard's Walk of Fame (source: www.Hollywood.patch.com).
3. This Eve is the hip-hop musician whose 2013 album release was titled 'Lip Lock'. She mainly goes by her first name only. (Hint: she shares her surname with the author of the book 'Feel the Fear and Do It Anyway'.)

In May 2013, after an 11-year hiatus that included acting roles, Eve released her fourth album 'Lip Lock'. It debuted in the Top 50 of the Billboard charts. [Source: www.hiphopdx.com] . (Susan Jeffers was the author of 'Feel the Fear and Do It Anyway'.)
4. This Adam is the lead singer and guitarist for the band Maroon 5. Can you "move like Jagger" and select the correct name?

The incorrect surnames are taken from other band members, namely, Jesse Carmichael, Mickey Madden and James Valentine.
In April 2013, Apple reported that Maroon 5's "Moves Like Jagger" was iTunes' second most downloaded song of all time in the UK. [Source: www.dailymail.co.uk]
5. This Eve was the skipper of Great Britain's curling team that won the bronze medal at the 2014 Winter Olympics.

The incorrect surnames are taken from other team members, namely, Anna Sloan, Vicki Adams and Claire Hamilton. In winning bronze, Eve Muirhead became the youngest skipper of a curling team to win an Olympic medal. [Source: www.telegraph.co.uk]
6. This Adam is an Australian professional golfer.

Adam Scott was born in Adelaide, South Australia in 1980. In May 2014, Adam reached the #1 world ranking for male golfers. He is only the second Australian to achieve this ranking (the first was Greg Norman).
7. This Eve is the main character in the 'In Death' series by Nora Roberts, writing as J.D. Robb.

Eve's surname comes from the city she was found in as a child. The series is set in a (near-)futuristic New York, with the first book commencing in the year 2058. If you like crime novels, it's a great read!
8. This Adam is the eponymous protagonist in a novel by George Eliot.

'Adam Bede' wass the first novel by George Eliot, which was the pen name of Mary Ann Evans. Many gems of wisdom can be found within the pages of her novels. One of my favorite quotes from 'Adam Bede' is: "Our deeds determine us, as much as we determine our deeds."
(You can find more quotes at; http://www.notable-quotes.com/e/eliot_george.html)
9. This Eve is an actress with a long career in radio, television and film, which included a school teacher in 'Our Miss Brooks' (radio and TV) and a school principal in 'Grease' (movie).

Eve Arden was born in 1908, and made her film debut in 1929. It has been said that Eve was so beloved in her role as high school English teacher Connie Brooks that she received offers of actual teaching jobs. (Source: www.latimes.com)
10. This Adam wrote 'The Wealth of Nations', first published in 1776.

Adam Smith, who was also a philosopher, was a key figure in the Scottish Englightenment. While the book is now most commonly referred to as 'The Wealth of Nations', the full title is 'An Inquiry into the Nature and Causes of the Wealth of Nations'. It laid the foundations of modern economic theory.
Source: Author Chucklemel

This quiz was reviewed by FunTrivia editor bloomsby before going online.
Any errors found in FunTrivia content are routinely corrected through our feedback system.
Most Recent Scores
Jan 25 2023 : Guest 98: 5/10
Jan 13 2023 : clevercatz: 10/10 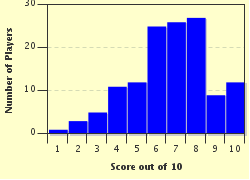 Related Quizzes
1. My Three (Grand)Sons Difficult
2. Tom, Dick or Harry? Average
3. Who am I? Annabel, Isabel or Mabel Easier
4. First Names Of Famous Characters Average
5. Who am I? Barry, Harry or Larry Very Easy
6. Less Than Famous First Names Average
7. A Woman Or A Man: The Name's The Same Easier
8. You Could Call Me Red Average
9. Unknown First Names Average
10. Who Am I? Jenny or Penny Average
11. Sesame Street Shuffle Easier
12. Herbs and Roses Average


Other Destinations
Explore Other Quizzes by Chucklemel