Another One Bites the Dust: 9 Trivia Quiz

Quiz Answer Key and Fun Facts
1. This American soldier/actor was the most decorated soldier of the Second World War. Amongst his awards is the Congressional Medal of Honor. He made quite a few westerns amongst his 44 films, but his most successful movie has to be "To Hell and Back", the film version of his autobiography in which he starred as himself. It created box-office records not broken until "Jaws" was released some twenty years later.

He died 18 May 1971 when the plane he was in ran into thick fog and crashed into a Virginia mountainside, killing all six people on board. His grave at Arlington National Cemetery is the 2nd most visited grave site after that of President John F. Kennedy.
2. This New Yorker landed a small part in a short-lived TV series called "Gidget" in which he played the brother-in-law of Sally Field who had a knack for getting into and out of trouble. Another series followed, ("Love on a Rooftop"), which was well received, but again short-lived. He was then offered a starring role in a comedy western series. It was a big hit but was cut short in its third season when he shot himself when suffering from depression.

His real name was not Duel, but Deuel. Pete preferred acting to studying at university and when his father saw him in a university drama production, he realised that university life was not for Pete and told him he should pursue a career in acting. He died 31 December 1971.
3. This English actress was nominated for three Oscars for the films "My Fair Lady" (1964), "The Song of Bernadette" (1943) and "Now, Voyager" (1942). She was made a Dame Commander of the Order of the British Empire in 1967.

Gladys played the mother of Henry Higgins in "My Fair Lady", a role she had played on TV only a year earlier. In the film version, there is a portrait of a lady above the fireplace in Henry Higgins house. It is actually a portrait of Gladys, painted in 1922. She died 17 November 1971.
4. One of the great actors of the silent era, he was famous for wearing glasses and performing death defying stunts such as the scene where he is hanging from a clock in the film "Safety Last!" (1923).

He lost the thumb and forefinger of his right hand in 1919, when a prop bomb exploded. He wore a glove and a prosthetic device to hide it thereafter. He is one of the original 36 founders of the Academy of Motion Picture Arts and Sciences. It is said that his 'glasses' character was the inspiration for Clark Kent, Superman's secret identity, as he looked very different when he took them off.

He died on 8 March 1971.
5. This musician became estranged from both of his parents and at one point claimed they were dead. He had several nicknames, "The Lizard King", "American Poet" and "Mr. Mojo Risin" among them. The last one is an anagram of his name. He was portrayed by Val Kilmer in a 1991 biopic.

He was found dead in the bath of his Paris apartment at the age of 27 on 3 July 1971. It is believed that he died of a heroin overdose but as no autopsy was carried out we'll never know for sure.
6. This jazz musician was born in New Orleans and played the trumpet. He sang the theme to a James Bond film. He was also skilled at scat singing (vocalizing using sounds and syllables instead of actual lyrics).

He was known as 'Satchmo' or 'Satchelmouth' and was a star back in the 1920's but his biggest hits came late in life. "Hello Dolly" was a huge hit in 1964 and "What a Wonderful World" topped the UK charts in 1968. "We Have All the Time in the World" was the theme to the James Bond film "On Her Majesty's Secret Service" (1969). He died 6 July, 1971.
7. This British actor is most famous for portraying an alien called Klaatu in "The Day the Earth Stood Still" (1951). He had come to earth to tell the peoples of our planet to live harmoniously together or be destroyed as a danger to other planets. He continued to make films as a supporting actor after that until in 1959 he made the TV series "The Third Man", playing Harry Lime.

During World War 2 Rennie was in the RAF and was sent to America for pilot training. A fellow student recalled that they were posted to Napier Field, Dothan, Alabama, to train on single engine planes. He continued, 'Napier Field was a large permanent Air Corps Base and most of us were quite content to stay on the camp when we had time off. One of the cadets on our course had told us that he was a film actor, but no one took him seriously. We had to admit that he was right however when a film came to the camp cinema called "Ships with Wings" starring Michael Rennie'. Michael died 10 June, 1971.
8. This actress was a child star, a veteran by age 7 and a leading lady opposite Harold Lloyd at age 14. She had a lovely singing voice and became a major star in musicals. Her hits included "Rio Rita" (1929) and "42nd Street" (1933). She left America for England in the mid 1930s where she became a West End stage star and together with her husband Ben Lyon was on national radio in the UK throughout the 1940s and 1950s.

Bebe had several thousand dollars worth of jewellery stolen from her Chicago hotel room one night and Al Capone, a big fan of hers, requested it be returned within 24 hours "or else". The threat was enough and her jewels were returned the next day. She died 16 March, 1971.
9. This American musician/songwriter had a relatively short career but is regarded as one of the greatest electric guitarists in the history of pop music. He was famous for his afro hairstyle and brightly coloured clothes.

Jimi was honourably discharged from the U.S. army after breaking his ankle in a parachute jump. He played "The Star Spangled Banner" at Woodstock in August 1969 and footage of that performance has become a study piece. He died in London 18 September 1970 from a barbiturate overdose.
10. This raspy-voiced American singer/songwriter was well received at the Monterey Pop Festival in 1967. She formed The Kozmic Blues Band and achieved even more fame at Woodstock in 1969 as a solo performer. She was Janis ______?

"Pearl", a quadruple platinum album, was the second solo studio album released by Janis and her only album recorded with the "Full Tilt Boogie Band", her last backing band. It didn't come out until after her death however. She died 4 October, 1970 of a heroin overdose possibly compounded by alcohol.
Source: Author Spontini 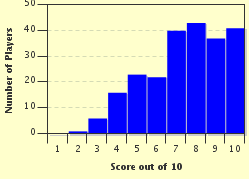 More Died in the 1970s Quizzes