Best of the Best: Women in Science Quiz

Throughout history, women have made important contributions in the field of science. See if you can answer these questions concerning the work of some very impressive female scientists.

Quiz Answer Key and Fun Facts
1. Christiane Nüsslein-Volhard shared a Nobel Prize in Physiology or Medicine in 1995 for her research concerning genetic control of embryonic development. What model organism, often used for its quick generation time, was used in the study?

Because fruit flies are easy to study due to their size and ability to reproduce quickly, the research done by Nüsslein-Volhard, along with Eric Wieschaus and Edward B. Lewis, led to the discovery and classification of the 15 genes that direct the cells to form a new fly.

Their research led to the founding of the field of of developmental genetics, as well as a greater understanding of the evolutionary process. It was later found that many genes that were identified by the trio had homologues in other species.

In other words, organisms that had a shared ancestry at some point, perhaps a common ancestor, may have a similar genetic structure.
2. Elizabeth Blackwell's status as the first woman to receive a medical degree in the United States is well known, however, how was she able to be accepted into medical school?


Answer: She was unanimously voted in by her all-male classmates.

Elizabeth Blackwell studied privately as she attempted to find acceptance into medical school in the United States. She was told, however, that either she needed to go to Paris to study or disguise herself as a man in order to be accepted into school. Why? As a woman she was naturally believed to be intellectually inferior - and - there was also some concern that she might provide unwanted competition to the male doctors! When she applied at Geneva Medical College, today called Hobart College, it was left up to a vote of the 150 male students, with a condition that if one voted negatively, she would not be allowed in! Thanks to a unanimous vote, Blackwell was allowed into the school.

Her sister, Emily, was the third woman in the United States to earn a medical degree.
3. Gertrude Elion, a pharmacologist, developed all of the drugs with the EXCEPTION of which of the following?

Motivated by the death of her grandfather, Gertrude Elion entered medical school with the hope of finding a cure for cancer. Working with George Hitchings, she received the 1988 Nobel Prize in Physiology or Medicine with George H. Hitchings and Sir James Black. She developed several groundbreaking drugs: 6-mercaptopurine (Purinethol), was the first treatment for leukemia, and Azathioprine (Imuran) was the first immuno-suppressive agent, used for organ transplants. Nelarabine was used in the treatment of cancer.
4. In 1986, Rita Levi-Montalcini shared a Nobel Prize in Physiology or Medicine jointly with Stanley Cohen for their discovery of NGF. In this case, what does NGF mean?

Wishing to become a medical doctor, Levi-Montalcini attended the University of Turin, and accepted a position there as a research assistant in the anatomy department after graduation. After losing that position at the beginning of WII, Levi-Montalcini set up a laboratory in part of her bedroom, and continued her study of the growth of nerve fibers in chicken embryos throughout the war, moving from home to home as necessary. In 1952, after reproducing the results of experiments done in her home, she was offered a position at Washington University in St. Louis, MO. There she isolated NGF, or Nerve Growth Factor, as the result of observing the rapid growth of nerve tissue in certain cancer cells. She was one of the first scientists to discover the importance of the mast cell, a type of white blood cell, in certain types of healing.

Shown in the picture is a rendering of the 2.5S Beta subunit of the neurotrophin Nerve Growth Factor.
5. Overshadowed, perhaps, by her more famous brother, who was the first female to discover a comet?

Caroline Herschel was a tiny woman; stricken with typhus as a young woman, which stunted her growth, she never grew past four feet three inches. Her mother believed she should be trained to be a household servant, while her father furthered her education whenever possible.

After his death, she moved in with her brothers, William and Alexander. At the time William was the choirmaster of the Octagon Chapel, and Caroline eventually became the main singer for his performances. When his attention turned toward astronomy, hers did too! She discovered her first comet in 1786, and went on to uncover a total of eight altogether, the first to find five of the eight. King George III paid her an annual salary to be her brother's assistant, making her the first female in England with an official government position.
6. Virginia Apgar, the first woman to become a full professor at Columbia University College of Physicians and Surgeons, gave her name to a test used to determine which of the following?


Answer: The health of newborn children.

As an obstetrical anesthesiologist, Apgar formulated a test called the Apgar Score, which was administered one minute after birth to determine the condition of the infant, and again after five minutes. If the scores, based on a criteria of complexion, pulse rate, reflex, activity, and respiratory effort, were below a certain number, additional tests may be performed.

The test helped to determine if an infant needed further medical attention after birth.
7. Rachel Carson is well-known for her book, "Silent Spring", which made the American public aware of environmental concerns. The book led to the subsequent ban of which dangerous pesticide in the United States?

A marine biologist who worked for the U.S. Bureau of Fisheries, Carson's first three books were about marine life. "Silent Spring", however, was about the effects that pesticides, especially DDT, were having on the environment. Her research led to a ban on the use of DDT in the United States, as well as other pesticides, which she believed posed a threat to both humans and animals, especially birds.

The ban on the use of DDT is believed to have been a major factor in the resurgence of the bald eagle population in the United States. Credited with the beginning of ecological movements in the United States, Carson's work eventually led to the formation of the Environmental Protection Agency in 1970, six years after her death.
8. The second female Nobel laureate in physics, Maria Goeppert Mayer worked for which prestigious group during World War II?

The Nobel Prize in Physics was awarded to Mayer and her colleagues in 1963 for their study of the nuclear shell model of the atomic nucleus.
9. Jane Goodall's fifty-five year study of animal behavior in the Gombe Stream National Park in Tanzania has led to her recognition of being the world's foremost expert on the behavior of which of the following?

Even though she lacked college training to guide her work, Goodall was chosen by Louis Leakey to study chimpanzee family and social life in hopes that her findings would help explain behavior in early hominids, humans and their close relatives. Her methods were different - for example, rather than numbering the creatures she saw, she named them, finding that each had their own distinct personality. Her findings disproved the ideas that only humans could construct and use tools, and that chimpanzees were vegetarian. She observed them using twigs to retrieve termites from a mound, and hunting and eating smaller primates.

Dian Fossey is well-known for her study of gorillas, and Joy Adamson wrote about raising a lion cub in her book, "Born Free". Mary Leakey, the wife of Louis, worked with him, and is credited with finding several hominid fossils.
10. As of the end of the twentieth century, which of the following sentences best describes the accomplishments of Marie Curie?

Interestingly, although other families may contain two Nobel laureates, the Curie family has received the most prizes - four won by five individuals. In 1903, Marie shared the prize in physics with her husband, Pierre; she won the prize in chemistry in 1911.

Their daughter, Irčne Joliot-Curie, shared the prize in chemistry with her husband, Frédéric, in 1935. Henry Labouisse, the husband of daughter Marie, won the Nobel Peace Prize in 1965 as the director of UNICEF.
Source: Author ponycargirl 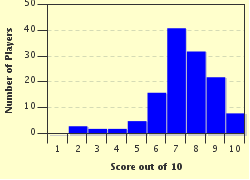 Related Quizzes
This quiz is part of series Best of the Best:

Representing the "ultimate" in achievement, these quizzes will direct you to the crčme de la crčme!