As I'm armed with my bad drawings, a stack of cue cards, and a Sharpie, here's a look at ten famous people who all bear uncanny resemblances when drawn on small pieces of paper. Did I mention I can't draw?

Quiz Answer Key and Fun Facts
1. Aside from being the first Postmaster General of the United States, this man achieved fame from flying a kite in a lightning storm...as I've intricately illustrated. Who is shown in the picture?

Born in 1706, Franklin was an important figure in American history due to his involvement in the politics, construction of the country, and scientific discoveries. Aside from becoming the first Postmaster General in 1775, Franklin invented bifocals, helped draft the Declaration of Independence, and famously tied a key to a kite to a string and flew it in a lightning storm (DO NOT TRY THIS AT HOME).

This subsequently developed further investigations into electricity. Since his then-contemporary influences on the society which would become the United States, Franklin has been hailed as a hero, a founding father, and an invaluable contributor to the world as we know it today.
2. Tall hat...beard...that unmistakable likeness...this one seems straightforward from the artist's perspective (re: my perspective). Which individual is this?

While many portraits of Lincoln don't include the stovepipe hat, many contemporary renderings of this sixteenth American President tend to include it. A key figure of American history (during the Civil War), Abraham Lincoln fought for equal rights and the emancipation of black slaves in the American South. Because of his general disfavour amongst southerners, Lincoln was shot and killed by John Wilkes Booth in 1865.

His attempts to create a unified, free nation have solidified his significance as one of many 'Great Americans'.

His face has appeared on the five dollar bill and the cent coin and he is one of the four men depicted on Mount Rushmore.
3. Okay. That's not a tumour- that's an ear...there's only one. Which of these historical people known for "Starry Night" and "The Potato Eaters" is depicted?

Okay, I understand that it's difficult to depict someone with only one ear when your other historical figures have no ears, but bear with me. Van Gogh was born in 1853 in the Netherlands and spent much of his career establishing himself as a Post-Impressionist painter.

While a number of his paintings were self-portraits, many of his most famous works were beautiful landscape scenes, slice-of-life images, and closely-framed depictions of flowers and other inanimate objects. Notably, Van Gogh cut off his left ear in 1888 (though some claim that it was only part of the ear).

Many subsequent self-portraits were then painted to feature his other side. He committed suicide in 1890 with much of his work going unnoticed until after his untimely death.
4. It's not too often a stick person holds a stick of dynamite, but here we are. Who is this handsome man who not only invented the material in his hand, but also had chemical element #102 named after him?

Swedish-born Nobel created many scientific patents in his homeland and became one of Europe's most important scientists in the early twentieth century. After his death in 1896, much of his inheritance was set aside to form the Nobel Prizes for Chemistry, Physics, Medicine, Literature, and Peace in 1901. Nobelium was first synthesized in 1958 in the United States. Nobel's most famous invention was dynamite, a creation that stabilized the highly-unstable nitroglycerin for use in mining and excavation.
The illustration provided shows him next to a barrel of TNT. Uncanny likeness, isn't it?
5. In 1818, the depicted figure (on the left) created 'the monster' (on the right). Not literally, of course. Instead, she wrote what many believe to be the turning point between first and second-wave Gothic literature. Who is the author?

Mary Shelley (nee Wollstonecraft) was a fairly important literary figure in the nineteenth century. Born to notable feminist writer Mary Wollstonecraft (the first) and early utilitarian author William Godwin in 1797, she married Percy Bysshe Shelley, a famous poet. Unsurprisingly, she wrote what many consider to be a benchmark of Gothic literature, "Frankenstein" (or "The Modern Prometheus"), in 1818 tackling science issues of the time and paving the way for what would become one of film's most recognizable horror icons.

Shelley wrote her stories in the Romantic period of literature at a time of scientific discovery; at about the same time, Charles Darwin would be hypothesizing about evolution.
6. The famous lady depicted ended up kick-starting the Civil Rights movement in 1955. What was her name?

Born in Alabama in 1913, Rosa Parks never became famous until an incident in 1955 involving a public bus. After deciding not to give up her seat for a white person, she sparked similar incidents in the South which ultimately led to anti-segregation marches, Civil Rights rallies, and the abolishing of the Jim Crow laws.

When Parks passed away in 2005, she was recognized by many organizations and American citizens as an important figure in the shaping of the nation. A statue bearing her likeness was also placed in the National Statuary Hall in Washington D.C.
7. In 1893, this acquitted murderess "gave her mother forty whacks" according to an old rhyme. Who is the suspected American criminal shown with her murder weapon?

While the crimes associated with Lizzie Borden in 1892 were never confirmed to have been committed by her specifically, many continued to tie her name in with the crime as no one was ever fully convicted of the murders of four other family members (by hatchet) including her parents and two brothers. Borden passed away in 1927 in Fall River, Massachusetts, the same town where she spent her life.

Her story persists as one of the most famous American unsolved murder mysteries and has been the subject of numerous film and television adaptations.
8. Making many changes to the item he is depicted with in the provided picture, what astronomer (born in 1564) discovered many of Jupiter's largest moons?

Although Galileo was a sixteenth century astronomer, his techniques with early, revised telescopes and his fascination with the night sky led him to discover not one, but four of Jupiter's largest satellites, specifically Io, Europa, Ganymede, and Callisto.

His investigation of outer space also led him to new scientific discoveries about Venus and the sun before his death in 1642. Although he was a follower of Copernicus, who firmly believed that the Earth was the center of the universe, he later retracted his views and was met with severe backlash from the Catholic church. Galileo's methods of study and his contributions helped to shape the world of science as it stands today.
9. Oft-cited as the creator of the detective story (with "The Murders in the Rue Morgue"), who is the man depicted with another of his creations (though that bird should really be black...)?

One of the great American Gothic authors, Poe penned several important works in his lifetime including "The Raven" (pictured above his chamber door, of course), "The Murders in the Rue Morgue", "The Black Cat", and "The Tell-Tale Heart". Poe was born in 1809 and spent much of his career writing to appease the public, and in the late-Romantic and Victorian eras of literature, the fascination was held in the advent of science and the sensationalized Gothic (after all- who needs mysticism to make something interesting when people are inherently dark and spooky?). "The Raven" was written in 1845 and became not only his most popular piece, but one of the most well-known and most adapted pieces of poetry ever written.
10. Born in Sicily in the third century BCE, which of these men was a forerunner in the field of physics, used his skills to determine pi, and is depicted in his photo running naked in the streets?

I'm surprised the Funtrivia Editors let that one by- nudity's typically forbidden! While shouting Eureka and running naked down the streets wasn't Archimedes' only achievement, this was reputed to have occurred when he discovered what would later be known as the Archimedes Principle (which regards buoyancy and displacement). Archimedes' prowess in the fields of math and science were very important as he not only found an accurate calculation of pi, but he worked with surface area and volume, calculated parabolas, and created many important physics-based inventions (eg. the Archimedes screw). Archimedes lived in Syracuse, Sicily his entire life and died there in 212 BCE.
Source: Author kyleisalive 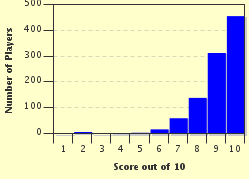