This Quiz is Not About Video Games!

Okay, I'm trying to stray away from video game quizzes, so I thought a general quiz would be a nice change. Then again, this may be a bit easier if you happen to know a bit about some games. Good luck!

Quiz Answer Key and Fun Facts
1. This Canadian-born Pittsburgh hockey player spent seventeen years on the team before buying it out prior to his retirement. His surname is Lemieux. What is his first name?

Mario Lemieux retired from professional hockey in 2006 and won the Stanley Cup twice during his career. He was captain of the Pittsburgh Penguins for many years and ended up breaking many records. In 2004, he was inducted as a name on Canada's Walk of Fame in downtown Toronto. His jersey showed the number 66.

Mario is also the name of one of the most iconic characters in the history of video gaming. The Italian plumber/Goomba-stomper extraordinaire has appeared in numerous games spanning all of Nintendo's consoles and handheld systems.
2. This author's first published novel later became a successful film released in 1990. This film starred Sean Connery, Alec Baldwin, and James Earl Jones, and it won an Academy Award for Sound Editing. Who is the author?

The movie in question is "The Hunt For Red October", which claimed nearly $200,000,000 at the box office. Tom Clancy has also obtained success from various other novels such as "The Sum of All Fears", "Patriot Games", and "Clear and Present Danger".

Clancy's name has been associated with various video game works including the "Splinter Cell" series starring Sam Fisher (a stealth agent), the "Ghost Recon" series of military shooters, and the "Rainbow Six" series of tactical shooters. "Rainbow Six" is the only one of these to be previously released as a Tom Clancy novel.
3. This American restaurant emulates the feel of a drive-in diner from the fifties. Originally built in Oklahoma, the restaurant now spans the states in more than three thousand franchise operations. What is the name of this drive-in chain?

Sonic, known as America's Drive-In, serves much of the normal fast food fare from burgers, to fries, to hot dogs, and unlike many others, they serve Sonic Slushes. The company has lasted more than fifty years and has changed its name from 'The Top Hat' to its current, memorable name.

Sonic is also the name of Sega's mascot. Appearing in numerous games alongside Tails the fox and Knuckles the echidna, the fierce, blue hedgehog has made his mark on consoles ranging from the Sega Genesis to the Nintendo Wii. The Sonic series has also spawned many cartoon TV shows.
4. "The Beatles" created this song in a few different forms. One of these, (denoted with a number 1) is found on the 'White Album' while the another (called number 9 and found as the final track on the same album) contained a line famous for the notorious 'Paul is Dead' fiasco, "Turn me on, dead man". What is the name of this song?

One of the most popular musical groups of all time, "The Beatles" defined a generation with their music. The infamous 'Paul is Dead' legend was somewhat fueled by the phase "Turn Me On, Dead Man" which listeners thought they heard when the song "Revolution 9" was played backwards.

The name 'Revolution' is also important in the gaming world- most specifically in the way of seventh-generation consoles. A subtle reference is the name Xbox 360. '360' is the number of degrees in a full circle, or a full revolution. Too far off? Okay, okay. The name 'Revolution' was also the codename for the Nintendo Wii before it was revealed at the E3 convention in 2005.
5. Which mystery series began with the novel "The Secret of the Old Clock"?

Nancy Drew, first published in the 1930s, was written under the pen name Carolyn Keene. "The Secret of the Old Clock" was originally written in 1931, but was re-released in 1959 to make Nancy an older character. In 1991, the hundredth Nancy Drew mystery, "A Secret in Time" was released.

"The Secret of the Old Clock" was also the twelfth mystery in a series of Nancy Drew PC games. The games have received modest success in the gaming world, as they were produced to get more girl gamers. The game takes elements from the first four Nancy Drew novels.
6. Which arachnid often attributed to desert regions was the form that the antagonist, Mathayus, took in "The Mummy Returns" (2001)?

Scorpions are venomous arachnids found on nearly every continent of the globe. Once a victim is stung, a great number of things can happen depending on the species of scorpion. Despite this, many people keep them as pets. The scorpion also plays a role in zodiacal constellations. In this case, it's more well known as Scorpius. People found under the sign of Scorpius are born between October 24th and November 23rd.

Banjos are often comprised of five strings but can also be used with four or six (like a modern guitar). Commonly found in music originating in the southern United States, the banjo gained popularity through the country and bluegrass genres. Similar to a guitar, the banjo uses frets and chords to be played. It is often plucked as opposed to strummed.

Banjo is also the name of a video game bear made popular by the developers at Rare Gaming. First appearing in N64's "Diddy Kong Racing", Banjo later starred in his own series of games, often with a breegull named Kazooie. The theme of music is often present in these games, and in the opening sequence of the first game, Banjo actually plays the banjo.
8. This potato chip brand, originally created by Frito-Lay, was introduced in 1998 and used the fatty food additive known as Olestra. What was its name?

Olestra was placed into Lays WOW Chips in 1998 and the company started dubbing them fat-free. After all, Olestra was just an additive which took the place of the regular fat in the tasty treat. The problem was that Olestra wasn't without its health problems. Shortly after eating the chips, some consumers would experience stomach cramps and diarrhea, and Frito-Lay was forced to add a warning to their chip bags noting that the Olestra may cause such problems. Sales declined shortly thereafter.

In the video gaming world, WoW is the acronym for one of the Internet's most popular MMORPGs, "World of Warcraft". The game features millions of players in what can literally be described as a humongous virtual world.
9. Which fault shows the longest boundary between the Pacific and North American tectonic plates?

The San Andreas Fault was first noted in 1895 and it runs eight hundred miles along the Californian Pacific coast. The fault is responsible for quite a few major earthquakes in the San Francisco/Los Angeles region. The fault was created by the Pacific plate moving northeast and the North American plate moving southwest. This 'grinding' of plates causes the fault and earthquakes related to it.

San Andreas is the setting of the 2004 "Grand Theft Auto" game which was later given an R rating for the notorious 'Hot Coffee' mod which allowed players to participate in an interactive encounter. Rockstar games has since released an edited version of the game.
10. Warren Buffett donated $30,000,000,000 to the Bill and Melinda Gates Foundation in 2007, the largest donation made to that date. He was also dubbed the third-richest man in the world (according to Forbes) in 2007. What vacuum cleaner company was he once attached to?

Warren Buffett invested in numerous companies (including Coca-Cola and Washington Post) and became one of the richest men in the world later in his life. One of these companies, The Kirby Company, has been part of the Berkshire Hathaway family for many years. The company was founded by Jim Kirby prior to World War I.

Kirby is also the name of a Nintendo character known for being able to inhale foes and shoot them out like a vacuum cleaner. He has appeared independently in many console and handheld games and is also a playable character in the "Super Smash Bros." series.
Source: Author kyleisalive 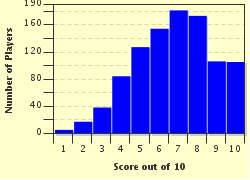