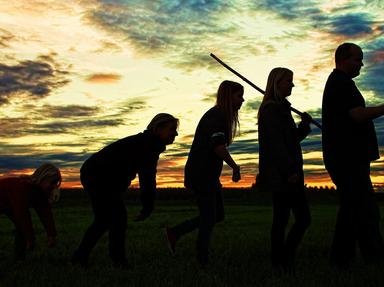 This is the second in a series of quizzes designed to present the scientific case for evolution. Surprisingly, it's sometimes the imperfections in evolution that are the best evidence for it.

Quiz Answer Key and Fun Facts
1. "Imperfect design" is a concept that makes sense from an evolutionary perspective, but not a creationist one. Many living things have parts that seem to be suboptimal or jerry-built, because they have evolved these parts from the "toolbox" that they had. Perhaps the most famous example of imperfect design is the giant panda's thumb. Why is it used as an example?


Answer: It isn't a thumb at all, it's a modified wrist bone

A giant panda appears to have six digits on its front paws- the normal five claws of a carnivore plus a thumb. The thumb is, in reality, a modified sesamoid bone from the wrist.

The vegetarian giant panda evolved from carnivores, and carnivores don't need thumbs. Bamboo-stripping pandas do.
2. The recurrent laryngeal nerve, which travels from the brain to the larynx (voicebox) in mammals, is often used as an example of imperfect design. Why?


Answer: It takes a much more circuitous path than is necessary

In mammals, the recurrent laryngeal nerve runs from the vagus nerve, down the neck, into the chest, under the aorta, around a ligament in the lung, then back up to the larynx in the throat. This is clearly an inefficient design, especially in a mammal like a giraffe!

In a fish, the path of the recurrent laryngeal nerve is a straight line. As mammals evolved, the positions of the various organs changed (such as the heart moving down into the chest,) but the path of the nerve did not, and thus assumed the tortuous route that it now has.
3. Some features of vertebrates only make sense if looked at from an evolutionary perspective. Let's look at baleen whales as an example. Which of the following is NOT true about baleen whale development?

Whales often have vestigial hind legs buried in their bodies, sometimes even complete with toes. These make little sense in a water creature, unless, of course, that creature's ancestors were land-dwelling, 4-legged animals.

It would be a much more intelligent design for whales to have gills, rather than to have to surface to breathe- but they don't.
4. In Arizona, there live some strange little whiptail lizards that are one of the few parthenogenic reptiles- the females can lay fertile eggs all by themselves, without males. What odd quirk, explainable through evolution, do these lizards have?


Answer: The female lizards are much more fertile if they are courted by another female

The ancestral species of the parthenogenic whiptails is still around. In this ancestral species, the males court the females, as in most other lizard species. This courting causes the female to release hormones that boost her fertility.

Even though several species of whiptail no longer require males to lay eggs, they still require the same courtship ritual to stimulate hormone production. So the parthenogenic whiptails pair up, and one female will first assume the part of the male, then they switch roles.
5. Genes are wonderful things. However, much of our genome is composed of "junk DNA," and things that just don't work. One gene that doesn't work in humans is the LGGLO gene. It should produce an enzyme that allows the body to synthesize Vitamin C, necessary for our survival- but it doesn't work. How is this evidence for evolution?


Answer: The gene also doesn't work in monkeys and apes- and it's broken in the same way in them

In most other mammals, the LGGLO gene is vital, because their diets are low in Vitamin C.

The LGGLO gene in all primates- including humans- is nonfunctional. Primates can survive with a non-functional LGGLO gene, because their diets are rich in fruits and other Vitamin C-rich foods. What is even more interesting is that the gene in every primate is rendered useless in exactly the same way- a single sequence of three amino acids is omitted.

The only explanation for this that makes sense is that the original DNA error occurred in an animal ancestral to the primates. In most animals, this error would have been fatal, but in this fruit-eating creature, the error was non-lethal, and passed on to its offspring- the ancestors of all of today's primates.

Guinea pigs also have a broken LGGLO gene- but it's broken in a completely different way.
6. Researchers working with chicken embryos in Britain and France were able to stimulate the embryos to do what?

The researchers injected cells from mice into the chicken embryos. The mouse cells could not "tell" the embryo how to produce teeth, but they could "translate" any available instructions to grow teeth. The embryos grew teeth, which indicated that the genetic instructions for tooth formation were still present in the chicken embryo.

This makes sense if birds evolved from reptilian ancestors that had teeth. Indeed, the teeth formed in succeeding experiments were undifferentiated, conical teeth like those of reptiles.
7. Ruminants (cloven-hooved, cud-chewing animals like deer, goats, antelope and cows) share several examples of imperfect design. Which of the following do they all share?

Ruminants all eat plant matter. The "good stuff" in plant cells is hidden behind a cell wall made of cellulose. Ruminants cannot digest this; they depend on bacteria in their guts to do so. If the bacteria die, so does the animal. This is actually quite common; sick ruminants often need a "cud transplant" of bacteria-containing material from another ruminant to get their rumens restarted.

All vertebrates share a five-digit limb, although in many species these digits have atrophied. However, all share skeletal evidence of five digits.

A perfectly-designed ruminant could digest its own cellulose, and would have no need for useless features.
8. Which of the following fish is a masterpiece of imperfect design?

Flounders (along with their other flatfish cousins, like halibuts and soles) are flattened fish that lay like a carpet on the sea floor, their eyes gazing upwards. Some cartilaginous fish, like skates and rays, do the same thing. But their bodies are built very differently. Cartilaginous fish are already pretty flattened in shape; evolution just spread the skates and rays out a bit more, and no major body redesign was required- they lay on their stomachs. Bony fish, as anyone can see who looks at one, are usually quite a bit higher than they are wide, like they were squashed in an elevator door. Flounders are bony fish. They don't have a stomach to lay on; they actually lay on their sides. But, of course, a fish lying on its side would have only one eye pointing upwards. Flounders solve this problem as young fish- their embryos start out looking like any bony fish, but after they hatch, one eye socket actually migrates to the top of the skull. The result is very strange-looking- see http://www.oceanicresearch.org/jpegs/winter%20flounder.jpg or http://www.pacadventure.com/images/flounder%20head.jpg or http://wiki.cotch.net/index.php/Flounder_eyes_and_mouths for a great picture.

The flounder's mouth is still on in the same way it would be in a normal bony fish- which means it opens sideways in a flounder!

This design is very awkward, but makes sense if flounders evolved from fish that swam upright.
9. Humans have quite a few instances of suboptimal design and evolutionary quirks. Like most animals, we have vestigial structures- things that evolved for a specific purpose at one point in our evolution, but are no longer useful for that purpose. What troublesome human organ is properly regarded as vestigial?

The often-infected appendix is a vestigial remnant of part of the cecum, a section of intestine at the junction of the small and large intestine that, in many other animals, serves as a pouch to enhance digestion of fibrous plant material. Humans have lost the capacity to digest such material, and thus this section of the digestive system has atrophied. Interestingly enough, the great apes all have the same intestinal configuration, and can also get appendicitis, just like humans!

Creationists will claim that the appendix is not vestigial because it may serve some function in the immune system (it should be noted that this has not been proven through research.) This is not an argument against evolution, as vestigial organs can serve some function- they just are no longer necessary for their original function. There is no question that the cecum is present, large, and active in many herbivorous mammals. There is equally no question (even the creationists admit this) that it is atrophied in both man and the great apes, and no longer serves its cellulose-digesting function.

For some great illustrations and discussion, see http://www.talkorigins.org/faqs/vestiges/appendix.html
10. The human muscular system also shows evidence of evolution, in that we have muscles that were developed for one thing, but not used for that purpose anymore. Which of the following is NOT vestigial?


Answer: The quadriceps muscle of the leg

The auricularis muscles would move and rotate the ears to catch sounds- if we had erect, movable ears. They work just fine in other animals; they are nonfunctional in humans, except in those few who can wiggle their ears!

The plantaris muscle in other primates flexes all of the toes. In humans, it is atrophied and doesn't even reach the toes.

The extensor coccygis muscles would wag our tails- if we had them. Instead, they are attached to our coccyx, and serve no function.

Why, other than evolution, would we have muscles that we neither use or need, but that are functional and useful in other primates?
Source: Author crisw 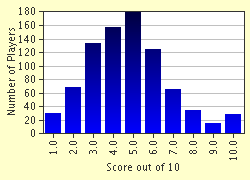