This quiz deals with Historical figures who are linked in some way.

It is an old, old school.
2. Pocahontas is forever associated with the man that she saved from death. Who was he?

She didn't marry him, however, she married John Rolfe.
3. Mason and Dixon were surveyors who gave us the 'line' that bears their name. When did they do their survey?


Answer: Shortly before the American Revolution

Their surveying took place in the 1760s.
4. Billy the Kid is forever linked with this lawman.

Did Garrett really kill Billy that day? The legend and the mystery live on ...
5. It is hard to think of Alexander Hamilton without also thinking of Aaron Burr. One reason for the antagonism between the two was due to Hamilton's efforts to prevent Burr from winning a Presidential election. Burr lost. Who won?

Their duel is probably the most famous in American History.
6. Similarly, mention of the Hatfields inevitably leads to thoughts of the McCoys. What two neighboring states were involved in this feud?

They lived in neighboring counties on the state line.
7. Mention of Jimmy Hoffa brings to mind the word 'disappearance'. Prior to that, however, he was known for his intense conflict with this man.

There was a mutual hatred between these two men.
8. Why is Wallis Simpson famous?

The twice-divorced Simpson later became the Duchess of Windsor. Her husband, the Duke of Windsor, was for a short time Edward VIII. He chose to marry her instead of remaining King.
9. When one hears the name of Meriweather Lewis, one instantly thinks of William Clark. When one hears of Lewis and Clark, one thinks of Sacajawea. What was her tribe?

She was fifteen years old at the time. She was pregnant when she started the journey and delivered and took care of her baby as well as help the Lewis and Clark expedition travel safely through Indian Territory.
10. Henry Stanley is best known for finding David Livingstone. Where did this happen?

'Doctor Livingstone, I presume.' He was found at Lake Tanganyika.
Source: Author robert362 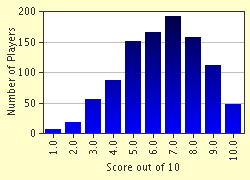 Related Quizzes
1. Names in Early American History Average
2. I Wish That I Could Have Been There With Him Average
3. Famous Firsts By American Women Average
4. Why Did It Have To Be Me? Tough
5. Best of the Best: American Female Reformers Easier
6. 20 Women Firsts (Mostly U.S.) Tough
7. Some Famous Past Americans Very Easy
8. U.S. Historical Figures and Their Accomplishments Easier
9. Famous American Women Easier
10. Things Famous People Say Average
11. Give Me Liberty! Average
12. American Jewish Leaders Average