Initially, initials of initiated people. .. See if you can figure them out ... Good luck.

Melba Moore (singer) ; Marie McDonald (actress, 'It Started With Eve'), Mae Marsh (actress, 'Birth of a Nation').
3. This F.F. wrote the suspense thriller, 'The Day of the Jackal'.

Barry Fitzgerald (actor, 'Going My Way'), Bobby Fisher (world chess champion), Buckminster Fuller (architect).
14. This A.C. is one of the greatest jockeys of all time. 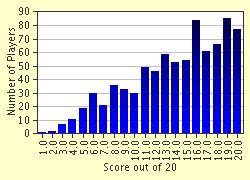 
Other Destinations
Explore Other Quizzes by Ikabud