My Initial Quiz, But Not My First!

There have been lots of famous people throughout history, that we know only by their initials, but what are their full names?

Share on Facebook
Share on Twitter
Share by E-Mail
Author
Yorkshire_boy
Time
4 mins
Type
Multiple Choice
Quiz #
312,047
Updated
Dec 03 21
# Qns
10
Difficulty
Average
Avg Score
8 / 10
Plays
1010
This quiz has 2 formats: you can play it as a or as shown below.
Scroll down to the bottom for the answer key.

Quiz Answer Key and Fun Facts
1. Everyone has heard of 'The Lord of The Rings' By J.R.R Tolkien, but what do the initials J.R.R. stand for?

Even though everyone refers to Tolkien as a British writer, he was actually born in South Africa. Tolkien thought up the majority of his 'storyscape' for his books, while serving in the armed forces during World War One.
2. The greatest show on earth, was put together by P.T. Barnum, but what do the initials P.T. stand for?

Amongst numerous things that Barnum developed in his lifetime, his museum housed America's first aquarium. A little known fact is that he was at one point in his life, the Mayor of Bridgeport, Connecticut and ran twice (unsuccessfully) to enter the United States Congress.
3. "Winnie-the-Pooh", was written by A.A. Milne. What do those two 'A's stand for?

A.A. Milne was a successful writer, before he decided to write a couple of children's books, based on his own son Christopher Robin, and his stuffed toys (especially his bear, Edward). Luckily the bear was renamed, and became the extremely popular "Winnie-the-Pooh".
4. Most people will have heard of Lawrence of Arabia but what do the initials in Lieutenant Colonel T.E. Lawrence's name represent?

"El Orrance", as the Arabs called him, was killed at age 46 in a motorcycle accident. This accident profoundly affected his neurosurgeon, Hugh Cairns. Sir Hugh consequently began a long study of, what he considered to be the unnecessary loss of life, from motorcycle head injuries, subsequently leading to crash helmets for motorcyclists. Lawrence was only 5' 5" tall.
5. On November 22nd 1963, JFK was shot in Dallas, what did the P stand for in his father's name Joseph P. Kennedy Sr?

Johnson so loved his initials, that he called his wife Lady Bird, so that she would have the same initials. This apparently also applied to his two daughters and even the family dog.
7. W.H. Auden was probably the greatest poet to have been born in Yorkshire, but what do the initials W.H. stand for?

Auden liked to toy with words, exploring the way words could conceal or reveal emotion. He married Erika Mann in 1935, so that she would get a British passport, and hence escape the Nazis.
8. This O.J. was sent to prison in December 2008, though not for the murder of Nicole Simpson or Ron Goldman. Often referred to as 'The Juice' the initials don't actually stand for Orange Juice, but what do they stand for in O.J Simpson?

O.J. owned two franchises for Pioneer Chicken, one of which was destroyed in the LA riots of 1992, caused by an unpopular verdict in the Rodney King beatings trial.
9. On a lighter note, let's fly away to Neverland with the author of "Peter Pan", J.M. Barrie. What does the J.M. stand for in his name?

James Matthew Barrie specified that the copyright, and all royalties, for the "Peter Pan" works should go to the Great Ormond Street Hospital in London, which specialises in the care of children.
10. My last question concerns the 33rd President of the USA, Harry S. Truman, so I suppose "the buck stops here!" What does the S stand for?

The S is apparently representative of his two grandfathers, Shippe from one and Soloman from the other. Truman himself apparently would say, "S is a name, and therefore should not be followed by a 'period'(full stop)", though he, himself invariable signed his name Harry S. Truman. Truman was the first leader to recognise Israel, 11 minutes after it declared itself a nation on May 14th 1948. Truman was the first leader to have ever authorised a nuclear attack, with the dropping of Little Boy on Hiroshima and Fat Man on Nagasaki, after the Japanese refused to accept the Potsdam Declaration.
Source: Author Yorkshire_boy

This quiz was reviewed by FunTrivia editor Snowman before going online.
Any errors found in FunTrivia content are routinely corrected through our feedback system.
Most Recent Scores
Jan 25 2023 : Guest 98: 4/10
Dec 26 2022 : davobwd9: 6/10 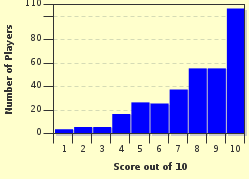 
Other Destinations
Explore Other Quizzes by Yorkshire_boy