Can you correctly answer questions about these famous people with initials in their names?

Quiz Answer Key and Fun Facts
1. Which famous director was responsible for "Birth of a Nation" and "Intolerance"?

David Llewelyn Wark Griffith (no wonder he went by 'D.W.') was an early American film director best known for his 1915 signature film "Birth of a Nation". Griffith (1875-1948) was born in La Grange, Kentucky; his father, "Roaring Jake" Griffith, was a Confederate Army Colonel and Civil War hero who passed on vivid war stories and melodramatic literary tales to his son. D.W. wound up as a director who happened to create such cinematic devices as 'the flashback', 'the iris shot', 'the mask' and 'cross-cutting'.

He adapted his Civil War film from Thomas Dixon's novel "The Clansman: An Historical Romance of the KKK", and was praised for his vision and condemned for his racism.
2. What is the full name of Canadian singer k.d. lang?

On November 2, 1961, Kathryn Dawn Lang was born in Edmonton, Alberta, Canada. She grew up to be a versatile musician who can sing country, pop, folk and jazz; she even performed Leonard Cohen's "Hallelujah" at the opening ceremony of the 2010 Winter Olympics held in Vancouver, Canada.

She has won awards like the Grammy and the Juno, and was awarded the title of OC (Officer of the Order of Canada) by the Canadian Governor General in 1996. Her fans seem to have a "Constant Craving" to hear her sing; she has also teamed up with such notables as Tony Bennett, Elton John and Roy Orbison.
3. For which profession was D.B. Cooper known?

To this day, no one is certain of the real name of the man who called himself D.B. Cooper. On November 24, 1971, this man hijacked a Boeing 747 airplane, parachuted out somewhere between Portland Oregon and Seattle, Washington, with $200,000 he extorted, and seemed to disappear from the face of the earth (as did the ransom).

This case happens to be the only unsolved air piracy in the history of American aviation! Some sources contend that he could not have survived the jump, while others like to believe that somewhere in the Pacific Northwest lives an elderly gentleman who lives simply and contributes to philanthropic charities.
4. Who was the famous 'showman' P.T. Barnum?

When you use the epithet "The World's Greatest Showman", it is likely you are talking about the one-and-only P.T. Barnum. Phineas Taylor Barnum (1810-1891) was a businessman (a pre-cursor to Don King) who founded the famous Barnum and Bailey Circus, which became known as "The Greatest Show on Earth" in 1871.

He talked Jenny Lind out of retirement to perform in the United States, and presented us with 3'4" Charles Sherwood Stratton whom Barnum called 'General Tom Thumb'. He was also known for perpetrating hoaxes and proffering oddities, but he certainly was an amazing promoter who changed the nature of commercial entertainment, and believed "every crowd has a silver lining".
5. Which architect created the Louvre Pyramid?

Born in Guangzhou, China in 1917, Ieoh Ming Pei is a renowed architect who is responsible for structures like the Louve Pyramid in France and JFK airport in New York City. Henry Cobb, from the firm of I.M. Pei and Partners, designed the John Hancock Tower in Boston, Massachusetts, which was completed in 1976.

In 1935, Pei began studying architecture, got his B.A. from MIT in 1940, and received his M.A. from Harvard. In between, there was a 'little' war, World War II, where he worked for the National Defense Research Committee.

He started his own architectural firm in 1955, and one of his first projects was the 'Mile High Center' in Denver, Colorado; truly, a man of the world!
6. Who is the graphic artist known for his impossible creations like "Relativity" and "Waterfall"?

Maurits Cornelis Escher (1898-1972) was a Dutch artist whose pictures not only challenged our sense of direction but our concept of reality as well. His works were often mathematically inspired, offering possibilities we might never have thought existed.

His medium was not confined to pencil drawings, but included lithographs, woodcuts, watercolor, etching, ink, paint and chalk. "Relativity" (1953) seems to defy perception, while his lithograph "Waterfall" challenges the mind. Personally, my favorite is the 'campy' 1948 piece called "Drawing Hands".
7. What is the name of the brokerage firm partially named after financier J.P. Morgan?

Chase National Bank was established by John Thompson, a 75 year old Wall St. publisher and banker, in a one room office in Manhattan in 1877. Thompson named the bank after his late friend Salmon P. Chase who had been Lincoln's Treasury Secretary, governor of Ohio and chief justice of the United States, and is the face on the $10,000 bill. Before that there was John Pierpont 'J.P.' Morgan (1837-1913) who was a banker, art collector and co-founder of Drexel, Morgan and Co. in 1871.

He helped transform American business - even after his death; in 2000, Chase Manhattan merged with J.P. Morgan to form the megacorp J.P.Morgan Chase & Co., with Jamie Dimon as CEO.
8. Which choice is correct for the given names of racecar driver A.J. Foyt?

"Super Tex" is the nickname given to Anthony Joseph Foyt, a retired automobile racer, born in Houston, Texas in 1935. He has participated in open-wheel racing, drove stock cars in NASCAR and won several sports car races. Foyt is the only driver to have won the Indianapolis 500 (4 times), the Daytona 500, the 24 Hours of Daytona and the 24 Hours of Le Mans.

He has survived several major crashes with severe injuries but never let that stop him. In 1976 and 1977 A.J. came out on top at the International Race of Champions, and he has been inducted into different motorsports halls of fame.

He was also honored by being named one of NASCAR's 50 Greatest Drivers in 1998.
9. What is the first name of the founder of scientology, L. Ron Hubbard?

Lafayette Ronald Hubbard (1911-1986), better known as L. Ron Hubbard or LRH, was the author of "Dianetics: The Modern Science of Mental Health" in 1950. Dianetics is a system of therapy based upon the tenets of psychotherapy, and is represented in the text of the Scientology Church and Religion. Hubbard became the first to scientifically "isolate, measure and describe the human spirit".

Although his beliefs and religion are often controversial, LRH told potential followers "We are extending to you the precious gift of freedom and immortality - factually, honestly". According to a recent survey, 25,000 Americans (out of 300 million) identify themselves as Scientologists.
10. For a little change, what is the surname of saxophonist Kenny G.?

Grammy winning musician Kenneth Bruce Gorelick ('Kenny G.') achieved success with his second and third albums "G Force" and "Gravity", but his fourth try, "Duotones" in 1986, was really his breakout album; his 6th album, "Breathless" went to #1. Kenny has collaborated with such musical greats as Andrea Bocelli, Whitney Houston, Natalie Cole and Frank Sinatra, and he is in the "Guinness Book Of World Records" for playing the longest note ever recorded on a saxophone.

He is one of the biggest selling instumentalists and one of the best-selling artists of all time.
Source: Author nyirene330 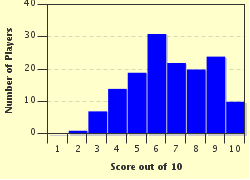