A quiz on famous people and characters, past and present, sharing alliterative names with the initials 'M M'. The initials can refer to the name they were born with, the name they changed it to or the name of a character or role. Enjoy!

Share on Facebook
Share on Twitter
Share by E-Mail
Author
Jennifer5
Time
5 mins
Type
Multiple Choice
Quiz #
322,683
Updated
Jul 23 22
# Qns
10
Difficulty
Average
Avg Score
7 / 10
Plays
866
Awards
Top 20% Quiz
This quiz has 2 formats: you can play it as a or as shown below.
Scroll down to the bottom for the answer key.

Quiz Answer Key and Fun Facts
1. The actress and singer Mary Martin (1913-1990) was the mother of which famous actor?

Mary Martin starred as Nellie Forbush in 'South Pacific' in 1949 and also as Maria von Trapp in the original (1959) production of 'The Sound of Music' on Broadway. She won a Tony Award for both of these performances. She was married twice, first to Ben Hagman and later to Richard Halliday, but retained her original name of Mary Martin. All the actors in the choices above were of course from 'Dallas'.
2. It is generally known that the English actor who was born Maurice Micklewhite became Michael Caine, but do you know which of the following restaurants he co-founded in the West End of London?

Michael Caine was knighted in 2002 under his real name of Sir Maurice Micklewhite. He founded Langan's Brasserie, situated in Stratton Street, just off Piccadilly, Mayfair, with Peter Langan and Richard Shepherd in 1976. The spinach souffle with anchovy sauce is, in my opinion, spectacular!
3. Actor Mike Myers is famous for his portrayal of the larger than life character Austin Powers, and for voicing the character Shrek; however, do you know the name of the film that catapulted him to film stardom in 1992, itself a spin-off from popular television series 'Saturday Night Live'?

Michael 'Mike' Myers was born in Scarborough, Ontario, in 1963. He co-wrote 'Wayne's World', starring in the title role of Wayne Campbell, with American actor and comedian Dana Carvey, who reprised his 'Saturday Night Live' role of Garth Algar in the film. It spawned a sequel, 'Wayne's World 2', the following year. Both were widely-acclaimed.
4. What was the title of American singer Amanda 'Mandy' Moore's debut album?

'So Real' was released in 1999 when Mandy Moore was aged 15. As well as her musical career she is also a successful actress and model. She married Ryan Adams (formerly of the group Whiskeytown) in 2009.
5. Marshall Bruce Mathers III, aka American rapper Eminem, shot to international stardom in 1999 following the success of his second album 'The Slim Shady LP'. What was the name of his award-winning song which featured in the film in which he also starred, '8 Mile'?

Co-written with Jeff Bass and Louis Resto, the song won an Academy Award for Best Original Song in 2002 and also won Grammy Awards the following year in two categories; for Eminem for Best Male Rap Solo Performance and also jointly for the three songwriters as Best Rap Song. Eminem founded his own record label, Shady Records, in 1999 with his manager Paul Rosenberg.
6. With which sport would you associate the great American sportsman Mickey Mantle?

Born in 1931 in Oklahoma, Mickey Mantle died in 1995 in Dallas. He set many baseball records during an illustrious career, including the most (18) home runs in a World Series in the 20th century. In 1974 he was inducted into the National Baseball Hall of Fame.
7. What was the name of the film, released in 1971 and adapted from Anthony Burgess's novel of the same name, that starred English actor Malcolm McDowell as a psychopath called Alex?

Written, produced and directed by Stanley Kubrick, 'A Clockwork Orange' was one of the most controversial and violent films of its era, with the character of Alex DeLarge rated one of the greatest film villains of all time. Malcolm McDowell has appeared in many films; he began his long acting career as an extra with the Royal Shakespeare Company, but his first film role was in the 1968 film 'If...' playing the character of Mick Travis.

He has lived in California for many years.
8. One of the greatest actors of all time, John Wayne's birth name was Marion Morrison. That fact is well known; however, do you remember the name of his last film?

Co-starring Lauren Bacall and Ron Howard, the 1976 film 'The Shootist' was John Wayne's last film before his death from cancer in 1979. After appearing and starring in several films his big break came in 'Stagecoach' in 1939.
9. What was the name of the author of the book 'Gone With the Wind'?

'Gone with the Wind' won the Pulitzer Prize in 1937 for American author Margaret Mitchell. The film of the book, released in 1939 and starring Clark Gable and Vivien Leigh as Rhett Butler and Scarlett O'Hara, won ten Academy Awards. For a long time it was thought that 'Gone with the Wind' was Margaret's Mitchell's only work, and indeed it was the only book published in her lifetime; however, in the 1990s a novella written by her in 1916 emerged, entitled 'Lost Laysen', which was published in 1996. Margaret Mitchell died in 1949 a few days after having been knocked down by an off-duty taxi driver in Atlanta, Georgia, aged only 48.
10. Last, but definitely not least, no quiz on people with the alliterative initials M M would be complete without Marilyn Monroe. So much has been written of her extraordinary life and untimely death, but do you know where she is buried?

Marilyn Monroe was born Norma Jeane Mortenson, and shortly afterwards baptised as Norma Jeane Baker, in Los Angeles County Hospital on 1 June 1926. She lived in Hawthorne, California, with foster parents for the first six or seven years of her life. She died on 5 August 1962 aged 36 and was buried at Westwood Village Memorial Park Cemetery on 8 August 1962. Among her many awards and nominations she won the Golden Globe Award for Best Actress in 1960 for 'Some Like It Hot'.
Source: Author Jennifer5 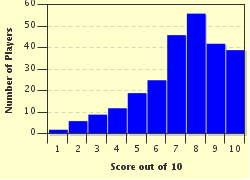 
Other Destinations
Explore Other Quizzes by Jennifer5