Let George do it! Trivia Quiz

My husband George often hears the words: "Let George do it!" This quiz about some famous Georges and the famous things they did is for my husband and all the other unsung Georges.

Share on Facebook
Share on Twitter
Share by E-Mail
Author
Catamount
Time
4 mins
Type
Multiple Choice
Quiz #
195,613
Updated
Dec 03 21
# Qns
10
Difficulty
Average
Avg Score
7 / 10
Plays
945
This quiz has 2 formats: you can play it as a or as shown below.
Scroll down to the bottom for the answer key.

This blend of jazz and classical music had its debut on Feb. 12, 1924 at a concert entitled "Experiment in Modern Music". It was a huge success.
2. This famous George likes to paint blue dogs.

The blue dog was modeled after his beloved terrier cross Tiffany. After her death blue dogs began to appear in his paintings. Inspired by the legend of loup-garou, the werewolf, he painted a blue dog for a book of Cajun ghost stories, but the figure was not limited to scary images.
3. This famous George, born Nathan Birnbaum in 1896, played God in three movies.

A ukulele player is mistaken for a spy in wartime Norway.
5. George Wright had a job that used to be quite common in the early years of the 20th century, but became less and less important through the fifties and sixties. What did this famous George do?

Wurlitzer built the first theatre organ in 1910. During the silent movie era the organist had to provide sound effects to emphasise the action on the screen. With the arrival of "talkies" the theatre organ was slowly phased out, but great organists like George Wright still provided music during intermissions, as well as releasing albums of modern organ music.
6. This famous George wrote "Silas Marner".

Born Mary Ann Evans in 1819, she took the pen-name of George Eliot for her first novel ("Scenes of Clerical Life" - 1857) to hide the fact that she was living in a common-law relationship (this was the Victorian age after all).
7. The adventures of this famous George were chronicled by Hans and Margret Rey.

The curious little monkey who always gets into trouble first appeared in the book "Raffy and the Nine Monkeys" that featured a giraffe. His own first book "Curious George" was published in 1941.
8. This famous George wrote a play about a professor who taught a flowergirl to pass as a duchess.

The play of course is "Pygmalion". A famous GBS quote: "I never resist temptation, because I have found that things that are bad for me do not tempt me." I have learned from another player that Shaw hated the name "George" and preferred to be known by his middle name. Sorry about that!
9. This famous George who wrote "Childe Harold's Pilgrimage" was a descendant of King James I.

Better known by his title, Lord Byron, he was born in 1788 in London but spent most of his childhood in Aberdeen, Scotland. He never forgot his Scottish upbringing and roots (his mother was from Aberdeen). When a review of his work "Hours of Idleness" suggested he had a "Scotch accent" he replied sarcastically: "Good God! I hope not. I would rather the country was sunk in the sea!" He later got back at the reviewer with a satirical piece called "English Bards and Scotch Reviewers".
10. Which George was the famous violinist and composer in the first half of the 20th Century who taught Yehudi Menuhin?

Born 1881, died 1955, Enescu's published output as a composer was relatively small but of high quality, like the opera "Odeipe". He had a fabulous musical memory which ironically led to the loss of some of his work as he never wrote it down. He also excelled as a pianist and conductor.
Source: Author Catamount

This quiz was reviewed by FunTrivia editor fringe before going online.
Any errors found in FunTrivia content are routinely corrected through our feedback system.
Most Recent Scores
Today : lidna: 5/10
Today : harveysh: 9/10 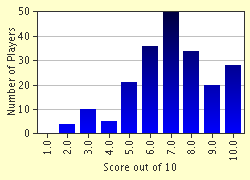 
Other Destinations
Explore Other Quizzes by Catamount