George is derived from the Greek word for husbandman ("Georgos"). Here we will meet some people with this name.

Share on Facebook
Share on Twitter
Share by E-Mail
Author
gme24
Time
3 mins
Type
Match Quiz
Quiz #
383,683
Updated
Apr 27 22
# Qns
10
Difficulty
Easy
Avg Score
8 / 10
Plays
492
Mobile instructions: Press on an answer on the right. Then, press on the gray box it matches on the left.
(a) Drag-and-drop from the right to the left, or (b) click on a right side answer box and then on a left side box to move it.

Stephenson was born in 1791 in Wylam, Northumberland. He was the builder of the first commercial locomotive. His first locomotive named "Blucher", after the German general, was used to move coal. Although the top speed of the locomotive was four miles per hour it could pull eight wagons loaded with coal. So although it was slower than the horses used to haul coal the fact the eight wagons could carry coal weighing 30 tonnes.
2. Footballer from Northern Ireland

Best was born in Belfast in 1946. As a player he excelled playing for Manchester United, helping them to three First Division titles in the 1960s. He also helped United to their first European Cup win in 1968. Sadly his lifestyle led to him to alcoholism and he died of multiple organ failure in 2005.
3. Irish Playwright

Shaw was born in Dublin on July 26, 1856. Some of his well known plays are "The Philanderer", "Man and Superman", "Caesar and Cleopatra", "Pygmalion" and "St. Joan". He was awarded the Nobel Prize for Literature in 1925 and won an Oscar in 1938 for "Pygmalion". The musical and later the film "My Fair Lady" was an adaptation of "Pygmalion". Shaw died in 1950.
4. Liverpudlian musician

Harrison was the youngest member of The Beatles. He was born in 1943 and died in 2001. He was the lead guitarist of the group and wrote, among others, "While My Guitar Gently Weeps", "Something", "Here Comes the Sun" and "Within You Without You". As a solo artist he had success with "My Sweet Lord", "What is Life?", "Got My Mind Set on You" and "All Things Must Pass" to mention but a few.

He actively supported the Hare Krishna movement and he also played a concert in aid of Bangladesh. He later set up a charity called Material World Charitable Foundation in 1973.
5. Kodak camera

Eastman was born in 1854 in Waterville, New York. His first camera went on sale in 1888 and was called Kodak. With a slogan "You press the button, we do the rest" his company went from strength to strength and became synonymous with photography. In 1900 he introduced a new camera called the Brownie which sold for one dollar and was a favourite with both children and servicemen.

Westinghouse was born in Central Bridge, New York in October 1846. Westinghouse was interested in railways and patented the air brake in 1869. This proved to be a great success - so much so it was made compulsory, as a safety device, in 1893 for all American trains. He formed his Westinghouse Electric Company in 1886 perfecting an AC current generator. He died in 1914.
7. Welsh poet and priest

Herbert was born in Montgomery Castle, Wales in 1593. He was elected orator of the University of Cambridge in 1620. He stepped down from his position and was ordained priest some years later. He wrote poems in three languages (Latin, Greek and English) that were published under the name "The Temple: Sacred Poems and Private Ejaculations" after his death in 1633.
8. English actor and singer

Formby was born George Hoy Booth in 1904 in Wigan, Lancashire. He started his career as a stable boy and jokey before becoming a music hall entertainer. He started using a ukulele in 1923, which later became his trade mark. He started recording in 1926 and later became an actor, appearing in 22 films.

Some of his well known songs are "When I'm Cleaning Windows", "Leaning on a Lamp Post", "Bless 'Em All" and "With My Little Stick of Blackpool Rock ". He died in 1951.
9. American comedian

George Denis Patrick Carlin was born in Manhattan, New York in May 1937. In 1960 he teamed up with Jack Burns forming a comedy team. Together they made a radio show called "The Wright Brothers". Carlin had an extensive career with recording, films, TV shows and appearances. He also appeared on a video game called "Cars". He died in 2008.
10. American actor

Peppard was born in Detroit in 1928. He started his acting career, appearing in various TV series before making his first film appearance in "The Strange One". His first major role was that of Paul Varjack in the film "Breakfast at Tiffany's" in 1961. He was the leader of the TV series "A-Team" as John Hannibal Smith which run from 1983 to 1987. He died in 1994.
Source: Author gme24

This quiz was reviewed by FunTrivia editor bloomsby before going online.
Any errors found in FunTrivia content are routinely corrected through our feedback system.
Most Recent Scores
Jan 26 2023 : Guest 156: 6/10
Dec 08 2022 : Guest 95: 10/10 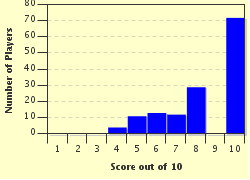 Related Quizzes
1. A Variety of Edgars Tough
2. Are You Curious, George? Very Easy
3. Elizabeth Who Too Average
4. Dearest, Loveliest, Elizabeth Tough
5. Francis and His Famous Friends Average
6. Who am I? GEORGE is the name of the game Tough
7. Edward, the Wealthy Guard Easier
8. Famous Gordons Tough
9. A Man Called Jean Average
10. Let George do it! Average
11. What's in a Name? Average
12. Fast, Fabulous and Flammable Florences Average