Elizabeth Who Too Trivia Quiz

This is a quiz about people or things that answer to the name Elizabeth or one of its diminutives. See how many you can identify.

Quiz Answer Key and Fun Facts
1. These Elizabeths share the same first and surname, but they are not related. One was an author, the other is an actress, feted as one of the most beautiful women of her time. The surname begins with T. These ladies are both called ...?

Elizabeth Rosemond Taylor was born in London in 1932. This frequently married actress has starred in many films, including "National Velvet" and "Butterfield 8".

Elizabeth Taylor the author (1912-1973) wrote several novels, including "Mossy Trotter", "Palladian" and "Angel".
2. This Elizabeth is a vehicle known by a two word nickname. The second part of the name is a diminutive of Elizabeth, the first part is the name of a metal. Strongly associated with Henry Ford, this vehicle flourished in the first part of the 20th Century. It is the

Henry Ford's Model T, alias the Tin Lizzie, was introduced in 1907 and succeeded by the Model A in 1927. The Tin Lizzie sold for around $500.00 in 1925, and fifteen million were produced.
3. This Elizabeth was born Florence Nightingale Graham in 1884 and died in 1966. She was famed in the beauty world for her cosmetics and her name is recognised as a brand today.

Florence Graham (Elizabeth Arden) was born in Canada to a Scottish father and an English mother. After working at several occupations, she became a "treatment girl", and later went into partnership with a beauty culturist named Elizabeth Hubbard. When the partnership dissolved, Florance adopted her ex-partner's first name and borrowed "Arden" from the poem "Enoch Arden" by Tennyson. During her long professional life, Elizabeth Arden developed many new ideas in the beauty industry, and by 1947 she had over one hundred salons and three hundred products to her name.
4. This Elizabeth was the first woman to qualify as a doctor in the USA. She was ...

Elizabeth Blackwell (1821-1910) was born in England but moved to America as a child. In 1849 she became the first woman to qualify as a doctor in the USA.
5. This Elizabeth was a famous food writer.

Elizabeth David was born in England in 1913. She travelled quite extensively in Europe, and on her return to England in 1946, she began to write food articles. Books followed, and by the time she died in 1992, her name was synonymous with good food. Elizabeth Arden was famous in the cosmetic world, Elizabeth Gaskell was a 19th Century writer and Elizabeth Bronte was one of the two Bronte sisters who died in childhood.
6. This Elizabeth was born in 1900 and died in 2002. Her given names were Elizabeth Angela Marguerite, and she married a prince who became King George Vl of England. She was known for many years as "The Queen Mother", but what was her original surname?

Elizabeth Angela Marguerite Bowes-Lyon was the daughter of the Earl of Strathmore. She married Prince Albert, The Duke of York, in 1923, and became Queen Consort after the abdication of Edward Vlll in 1936. Often known affectionately as "the Queen Mum", Elizabeth's life spanned the whole of the 20th Century, and she became the first centenarian ever recorded in the British Royal Family.
7. This Elizabeth was an American actress, famed for playing a pretty suburban witch with a twitch. She shared a surname with a popular Canadian children's book author. She was...

Elizabeth Montgomery was born to actor parents Robert Montgomery and Elizabeth Allen is 1933. She began acting at the age of 19, and was still making films three years before her death in 1995. She was married four times, most famously to William Asher, and was best known for her portrayal of Samantha Stephens, the witch with the twitch in "Bewitched".

The programme lasted for eight seasons, before ending in 1972.
8. This Elizabeth was a seagoing vessel and is named after a queen. She has a three word name, but is usually known by a convenient short form.

The former flagship of the Cunard Line was the Queen Elizabeth II, popularly known as the QE2. QE2 was launched in 1967 and made her official maiden voyage in 1969. This great transatlantic liner was used as a troopship in 1982, but was generally a passenger vessel. She could carry 1900 passengers and was almost 300 metres in length.
9. This Elizabeth is well known by three names; her actual name and two pseudonyms. She is a popular author of romantic suspense titles, and one of her best known characters is called Amelia. She also writes non fiction under her real name. Which of the following combinations is the right one?

Elizabeth Peters is one of the two pen names of author Barbara Mertz. Using the Peters name, she writes popular mystery suspense stories about such lively heroines as Amelia Peabody Emerson, Vicky Bliss and Jacqueline Kirby. The author was born in She was born in Canton, IL in 1927, and gained her Ph.D. in Egyptology in 1952.
10. This Elizabeth is a British model and actress who is probably as well known for her gossip column appearances as for her acting roles. She has appeared as the devil, and also as a secret agent who was actually a killer robot. She is-

Elizabeth Jane Hurley (sometimes known as Liz) was born in Hampshire, UK, in 1965. She has starred in several movies, including "Austin Powers: International Man of Mystery" (1997)(in which she played Vanessa Kensington, who turned out - in the sequel - to be a robot) and "Bedazzled" (2000) in which she played the devil.
Source: Author Sallyo 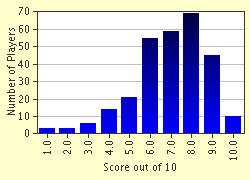 Related Quizzes
1. A Variety of Edgars Tough
2. Are You Curious, George? Very Easy
3. Dearest, Loveliest, Elizabeth Tough
4. Francis and His Famous Friends Average
5. Who am I? GEORGE is the name of the game Tough
6. Edward, the Wealthy Guard Easier
7. George without Dragon Easier
8. Famous Gordons Tough
9. A Man Called Jean Average
10. Let George do it! Average
11. What's in a Name? Average
12. Fast, Fabulous and Flammable Florences Average