My dad, Gordon, would have been 95 this year. I've written two other quizzes about people named Gordon and wondered how many other famous 'Gordies' might be out there, either in first, middle or last names, in fact or fiction.

Quiz Answer Key and Fun Facts
1. In 2007, who became Prime Minister of Britain?

Glasgow-born Gordon Brown (b. 1951) became the UK Prime Minister on 27 June 2007. Prior to becoming Prime Minister, Brown served for ten years as Chancellor of the Exechequer under Tony Blair.

The other two names I made up.
2. This famous, yet straight talking, chef is also a television personality and entrepreneur. Who is this culinary mastermind with fans on both sides of 'the pond'?

Scottish-born Gordon James Ramsay, OBE, (b. 1966) owns about 10 London restaurants and a further dozen around the world. His popular UK television series "Ramsey's Kitchen Nightmares", led to Fox's "Hell's Kitchen" and "Kitchen Nightmares". He hosted another BBC show "The F-Word", for which he, himself, says "the 'F' stands for 'Food'!", although he is well known for his liberal use of obscene language!

Originally from Toronto, Canada, Chef Jennifer Gordon divides her time between the Scottish borders where she owns a Bed and Breakfast - and Australia. She graduated with honors from the Humber College Chef apprenticeship program and completed her training in Ontario's finest Relais & Chateaux. She has both entered and won prizes in many pastry and chocolate competitions.

American Chef Emeril JOHN Lagasse (b. 1959) is, like Gordon Ramsey, a brilliant, well-known chef and entertainer. All I have to add to that is "BAM!"

Gordon Benson Ramsey (1926-2006), was a distinguised U.S. foreign service officer, composer and jazz musician.
3. What is the etymology of the name 'Gordon'?

While the original etymology of the name does indeed stem from the OE 'great hill', Gordon has long been a popular personal, family and place name in Scotland.

Although of Norman and not Scottish origin, the Gordon clan were powerful rulers of the northeast of Scotland, welcomed to the country by King David I. While Clan Gordon does have a tartan, it is sometimes referred to as 'House of Gordon' because of their Norman roots.

Gordias (or Gordius) was a royal name in the mythic prehistory of Phrygia. It is from this king that we get the phrase "The Gordian Knot", in which any who could unravel this knot would be master of Asia.

To my knowledge, there are no Biblical characters named Gordeth and it was invented for this quiz.
4. This 19th century English poet is famous for his/her poetry, such as "Childe Harold's Pilgrimage" and "Don Juan", as well as a profligate lifestyle. Who was this person?

George Gordon Byron (1788-1824) was a prominent Romantic poet. His prodigious sexual appetite spawned (probabaly true) rumors of homosexuality and incest. Lady Caroline Lamb described him as "mad, bad, and dangerous to know." He was, however, a brave revolutionary in Italy and in Greece, where he is regarded as a national hero. His daughter, Ada, a gifted mathematician, worked with Charles Babbage on the 'analytical engine', a precursor to the modern computer. A computer language is named for her. Gordon is his baptismal name, not a surname.

Caroline Gordon (1895-1981), was a Kentucky-born novelist and literary critic and author of "None Shall Look Back" and "The Women on the Porch" among others.

Gordon Sumner (n. 1951), better known as 'Sting' is a prolific writer and musician who came to fame with the New Wave group The Police.
5. Who was one of the seven original astronauts in Project Mercury, the first manned U.S. manned space effort?

Born in Shawnee Oklahoma, Leroy Gordon Cooper, Jr., also known as Gordo Cooper, (6 March 1927 - 4 October 2004). According to the website jsc.nasa.com: Colonel Cooper was selected as a Mercury astronaut in April 1959.

Cooper served as command pilot of the 8-day 120-revolution Gemini 5 mission which began on August 21, 1965. It was on this flight that he and pilot Charles Conrad established a new space endurance record by traveling a distance of 3,312,993 miles in 190 hours and 56 minutes. Cooper also became the first man to make a second orbital flight and thus won for the United States the lead in man-hours in space by accumulating a total of 225 hours and 15 minutes.

Cooper served as backup command pilot for Gemini 12 and as backup commander for Apollo X. Finally, he logged 222 hours in space and retired from the Air Force and NASA in 1970.
6. What fictional heroic character first came to prominence in 1930s via a comic strip, but has remained popular in various media ever since?

Flash Gordon was created in 1934 by cartoonist Alex Raymond. Gordon, along with his 'team', the lovely Dale Arden and Dr. Hans Zarkov, originally found themselves on the planet Mongo fighting the evil Ming the Merciless with occasional help from others ruled by Ming. The series eventually moved on to other planets, but the original plot and characters have stood the test of time in film serials, radio, television (most recently on the Sci-Fi network). In 1980, director Dino DiLaurentis brought it to the big screen starring Sam J. Jones, Brian Blessed, Max Von Sydow, Topol and future James Bond Timothy Dalton.

Barbara Gordon, or Batgirl, first appeared in DC comics in 1961 and appeared on the 1960s series "Batman", played by Yvonne Craig. Batgirl retired in the comics in 1988, but was replaced 11 years later by Helena Bertinelli, formerly known in DC comics as The Huntress, then by Cassandra Cain in 2000, then by Charlotte Gage Radcliffe, and back to Cassandra Cain in 2007.

Gordon Gekko was the evil corporate raider portrayed by Michael Douglas in the 1987 movie "Wall Street".

Buck Rogers', another sci-fi hero who began as a comic strip and made it to movies and TV, first name was Anthony, not Gordon.
7. While we're on a sci-fi 'kick', what recurring character on the long-running British series "Dr. Who" belongs in this quiz?

Brigadier Alistair Gordon Lethbridge-Stewart first appeared in the Patrick Troughton (Second Doctor) episode "Web of Fear" as a colonel. Always portrayed by British actor Nicholas Courtney (b. 1929), he is the British head of UNIT (United Nations Intelligence Taskforce). 'The Brig' appeared in nearly every episode during the Jon Pertwee years (the Third Doctor was banished to Earth then). The Brig appeared with all subsequent doctors except the Sixth Doctor (Colin Baker).

Although UNIT has been mentioned in the 'newly regenerated' adventures of the Ninth and Tenth Doctors (Christopher Eccelstone and, currently, David Tennant), and in the new "Doctor Who" spin-off "Torchwood", the Brig has not made an appearance. The character continues to appear in novelisations and radio "Doctor Who" broadcasts, as well as in other media.
8. Popular NASCAR driver Jeff Gordon was born in 1971 in what city?

The Roy Hayer Memorial Race Track (previously the CrackerJack Track) in Rio Linda, California, was the first track on which Gordon competed. He's won many NASCAR championships in his on-going career and in 1998 was named one of NASCAR's 50 Greatest Drivers.
9. Which Gordon is a famous designer of Formula One race cars, especially the Laren F1 'supercar' road car?

Born in 1946 in Durban, South Africa, (Ian) Gordon Murray grew up in motor racing and studied mechanical engineering at Natal Technical College (now Durban University, where he was named an honory professor in 2002).

Murray moved to England in 1968 and worked for Lotus. Among the Formula One cars he's designed are the BT46B, the McLaren MP4/4 and the Rocket, an ultra-lightweight, open cockpit roadster.
10. Who was Peter Asher's partner in the Liverpool singing duo who charted several hits during the 1960s 'British Invasion' and covered at least one Beatles' song?

Born in Glasgow, Scotland, on June 4, 1945, Gordon Trueman Waller later joined forces with Peter Asher to form 'Peter and Gordon' in the 1960s. Their biggest hit, the Paul McCartney song "World Without Love" (Paul was dating Peter's sister, Jane Asher) hit the charts in 1964. The duo, while never scoring as big a hit as "World Without Love", did continue to record other hits throughout the 60s such as "I Fall to Pieces" and "Knight in Rusty Armour". Their last big hit was "Lady Godiva" in 1967.

Weller has appeared as Pharoah in a production of "Joseph and the Amazing Technicolor Dreamcoat."

Gordon Lightfoot is the wonderful Canadian singer/songwriter famous for chart-topping songs such as "Sundown" and "Carefree Highway".


This quiz is in memory of my father, although not the most famous, definitely the best Gordon ever!
Source: Author woboogie 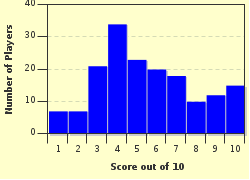 Related Quizzes
1. A Variety of Edgars Tough
2. Are You Curious, George? Very Easy
3. Elizabeth Who Too Average
4. Dearest, Loveliest, Elizabeth Tough
5. Francis and His Famous Friends Average
6. Who am I? GEORGE is the name of the game Tough
7. Edward, the Wealthy Guard Easier
8. George without Dragon Easier
9. A Man Called Jean Average
10. Let George do it! Average
11. What's in a Name? Average
12. Fast, Fabulous and Flammable Florences Average


Other Destinations
Explore Other Quizzes by woboogie