Death is only part of life, and this quiz will cover unique and memorable deaths of famous individuals.

Quiz Answer Key and Fun Facts
1. Which woman became famous after a battle between members of her family over whether she should be kept alive on life support, turned into a political issue?

Terri Schiavo was put into a persistent vegetative state after collapsing in her house from a cardiac arrest that caused severe brain damage. She lived for a few years before her husband asked to have her removed from life support, but her parents opposed the idea.

This led to extensive US media coverage, and a hotly debated political issue. However, on March 31, 2005, she was taken off life support and died from dehydration.
2. During 1997, which person was killed in a car crash in Paris after leaving the Hotel Ritz, and later had an estimated 2.5 billion people watch her funeral?

Diana, Princess of Wales, was killed in horrific car crash in Paris.Some news sources speculated that the paparazzi caused the crash while many others put the blame on the driver. She was a beloved figure whose death somewhat overshadowed Mother Teresa's death which occurred five days later.
3. In 1996, which famous singer was killed in a drive-by shooting in Las Vegas after leaving a Mike Tyson fight?

Tupac Shakur, or 2pac, was shot four times while leaving a boxing match in Las Vegas. He had been previously shot during November of 1994, but had survived the five gunshot wounds sustained then.
4. During 1916, which Russian mystic was murdered by a combination of poison, bullet wounds, and drowning?

According to the story of his death, Rasputin had been poisoned with enough cyanide to kill many men. After it was found that he wasn't dying, he was shot three or four times in the back. Once the murderers realized that hadn't killed him, they bound him and threw him in an icy river were he drowned, although it appeared that he had broken free of his bonds.

His death is arguably more legendary than his life, and although there is still speculation on the veracity of the tales of his death.
5. In 2006, which person was killed by a stingray while filming a documentary in the Great Barrier Reef?

Steve Irwin was killed in September 2006 off of the coast of Queensland, Australia. The barb of the stingray's tail had penetrated his heart, and immediately killed Steve Irwin. He was filming a documentary, for the Discovery Channel called "Ocean's Deadliest", which aired a few months after his death.
6. In 1994, which singer was found having committed suicide by shooting himself in the head in his garage?

Kurt Cobain, lead singer of Nirvana, had a single shotgun wound to the head when found by an electrician in his garage. He was married at the time to Courtney Love, whom some speculate may have had a hand in his murder, although these accusations are unfounded.
7. Which pair of outlaws were killed during 1934 after six police ambushed them and subsequently riddled their car with bullets?

On May 23, 1934, Bonnie Parker and Clyde Barrow were driving up a road in Louisiana when a family member, hired by the police, got them to stop. Six officers, who had been lying in wait, opened fire on the car shooting about 130 rounds. The incident is made famous by the bullet-ridden car which went around "on tour" and became a symbol of the Bonnie and Clyde ambush.

It was also noted that at the scene of their deaths, people swarmed to collect souvenirs.
8. During 2004, which former NFL star was killed while serving in Afghanistan by friendly fire after turning down a three-year, 3.6 million dollar contract to play in the NFL?

Pat Tillman was an Arizona State football star and always achieved above expectation throughout his life. He turned down a 3.6 million dollar contract from the Arizona Cardinals in order to serve his country in the wake of the September 11 attacks. It was later found that he was killed by friendly fire, which led to a controversy regarding a cover-up by the military.
9. Which famous French actor/wrestler died at the age of 46 from heart failure while sleeping in Paris in 1993?

Andre the Giant earned his nickname by being an extremely large man, 7' 4" and weighed 540 lbs. He was a famous wrestler, but also acted in movies such as "The Princess Bride". He passed away from heart failure in his sleep in Paris.
10. Which of these United States presidents was not assassinated?

Reagan was shot by John Hinckley Jr. as he left the Hilton Washington Hotel, but was not killed in the incident. John Kennedy was sniped by Lee Harvey Oswald from a book depository, although many alternative conspiracy theories exist. His death was immortalized by the Zapruder film. McKinley was shot by Leon Czolgosz, an anarchist, at the Pan-American Exposition. Abraham Lincoln was shot in the back of the head at Ford's Theatre by John Wilkes Booth.
Source: Author Moose356 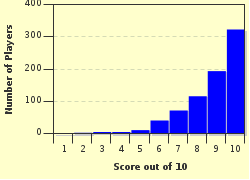 Related Quizzes
1. They Passed On Christmas Day Very Easy
2. It Happens to Us All in the End Average
3. And So, That's Why You Never... Difficult
4. Death By Invention Average
5. On Christmas Day in the Mo(u)rning Average
6. Is This Any Way to Run an Airline? Average
7. Strange Endings Easier
8. Unusual Deaths Average
9. How Did I Die? Easier
10. How Did They Die? Easier
11. Missing Average
12. Hanged, Drawn, and Quartered Average


Other Destinations
Explore Other Quizzes by Moose356