While death is often a tragedy, some people may have asked to punch their tickets a bit early, at least subconsciously. This quiz examines some 'Darwin Award' winners who set examples for the rest of us...not that we'd necessarily make the same choices.

Quiz Answer Key and Fun Facts
1. In South Korea in 2010, one frustrated man took his anger a little too far and crashed his electric wheelchair through which of these, plunging to his demise?


Answer: A pair of elevator doors

Although featured on a number of 'Funny News' sites after one angry South Korean man met his fate in 2010, it's completely true; it actually happened. Footage on a security camera shows the man ramming into a set of elevator doors shortly after they close and the elevator departs without him. Rather than wait, the man decides that ramming his wheelchair into the doors is the only suitable means of solving his problems, but upon the third collision, he falls right through them and into the elevator shaft behind. This particular video was uploaded to Youtube in October 2010.

And so, that's why you never take your anger out on an elevator!
2. In Washington in 2010, two men cleverly decided to create their own 'rocket barrel' by filling an everyday barrel with methanol and striking a match to one end. What did they do next?


Answer: Tried to ride on top

For those of you who know a bit about chemicals and what makes them the way they are, methanol is flammable. Many use it as a component of (or as an alternative to) regular and diesel gasoline. According to the Darwin Awards, two men near Skagit Raceway in Washington decided to pull this stunt. What they didn't realize was that their idea would result in what could only be deemed 'explosive'. Rather than shoot around like a cartoon rocket barrel, their homemade keg exploded with them riding on top, killing one of them.

And so, that's why you never decide that a homemade rocket barrel is a clever idea!
3. In 2010, one man on vacation at the Grand Canyon fell to his death. He tempted fate by attempting to do which of these things?


Answer: Jump along the outcroppings of the canyon

See, some people risk it all for the thrill. According to local newspapers, a tourist from California decided to jump from edge to edge along the rim of the Grand Canyon while his friends watched and he took a tumble over the side. Coincidentally, on the same day (October 1st), two women were struck by a bolt of lightning on the same part of the canyon. Their injuries were accidental and non-fatal.
It's no surprise that the Grand Canyon receives as many fatalities as it does. A number of people every year become injured or stranded on the trails in and around the canyon due to its technical hiking/rafting/biking difficulty. Some people just don't practice caution.

And so, that's why you never look too far over the edge of the canyon!
4. In 2008, an Oklahoma zookeeper met his end (despite a clear understanding of the rules against his actions) when he walked into a cage containing what cat hybrid, also one of the largest known cats in existence?

The liger is a hybrid of two cat species, the lion (male) and the tiger (female), and the result is one of the largest cat species ever found in modern society. As expected, the liger is not a common species in everyday settings. Large cats also tend to be quite difficult to work with for some handlers and it is on that note that a fairly reputable zookeeper stumbled upon an Oklahoma zoo's ligers during their evening meal. As expected, they thought he was part of said meal. He survived only to make it back out of the enclosure, the door of which specifically stated 'do not open the door'.

And so, that's why you never interrupt a large animal's dinner!
5. In 2008, Adelir Antonio, a Brazilian priest, attached a thousand balloons to a chair and ascended into the skies to raise money. As expected, Antonio's idea didn't bode well. Where did he touch down?


Answer: Somewhere in the Atlantic Ocean

Originally planning to raise money for Catholic rest stops in Brazil, Adelir Antonio ended up strapping (literally) one thousand balloons to a buoyant chair, armed himself with safety gear, a cell phone, and a GPS unit, and tried to break a Guinness record in the process. When winds from the west started pushing him over the ocean, he realized that he didn't know how to use the GPS and ended up getting lost somewhere over the Atlantic. According to reports, an oil rig off the coast of Brazil found the remains of his body; pieces of balloons were found all over the place from beaches to cliffsides. Surprisingly, Antonio was neither the first nor the last person to float off in a balloon chair and (erm...) have his balloon burst.

And so, that's why you never try to recreate the Pixar film "Up!"
6. In England in 2006, one man's death by stabbing baffled detectives for nearly a year. It was later discovered that which of these people took a knife to him to test if his jacket was stab-proof?

One of the major qualifications of the Darwin Awards is that one must remove oneself from the gene pool. Stupid murders don't have their place in the Darwin Awards. While this particular person's body was found in August 2006, it wasn't until 2007 that officials determined that his death had been caused by (as the story goes) 'misadventure'. He had attempted to test whether or not his jacket was stab-proof and opted to do so with the jacket still on his body.

And so, that's why you never stab yourself, even as a test!
7. According to Darwin Awards, in early 2005, a Croatian man foolishly attempted to use a grenade to clean which of these?

Another case of a weapon being used to do something it's not supposed to. In this case, a Croatian man only needed to use the grenade to weigh down a broom-like object to clean his dirty chimney. I know what you're thinking; he accidentally caught the pin on the broom and it exploded in the chute. Not really. Instead, this particular Darwin Award winner decided to weld the live grenade to a metal chain. As we've learned before, fire and explosives don't mix.
In 2002, a different Croatian man (well...they'd have to be different considering) tried to use a chainsaw to open a grenade. That didn't turn out too well either.

And so, that's why you never weld a grenade to anything, ever!
8. In Brazil in 2003, a man cleaning gasoline tankers followed protocol by filling the trucks with water. To check to see how much he had filled, he decided to do which of the following things?


Answer: Light a lighter and look inside

The point behind filling a gas tanker with water is to ensure that the volume of the tank itself does not contain gasoline in any state. In other words, the water forces gas out so that it can be cleaned and reused. What our Brazilian Darwin Award winner failed to realize was that lighting a lighter to check your progress from inside a gas tanker doesn't mean you've finished the task at hand. Unsurprisingly, the tanker combusted, killing him after he took flight. Let's just say that unless the truck is full, it's not free of gas fumes.

And so, that's why you never forget your flashlight...or you wait!
9. In 2002, a Brazilian man (what's with Brazil?) was killed by which of these while attempting to set fire to a beehive he found in a tall tree?

Although the man's hypothesis that fire subdues bees enough to move them is incorrect (the smoke is what subdues the bees) it's really his faulty planning ahead that caused his fatal end. Deciding to set fire to the beehive, this Brazilian's plan involved covering his head with a plastic bag to prevent himself from inhaling smoke and getting stung in the face by angry bees. According to reports, he didn't make it back to the tree before he asphyxiated.

And so, that's why you never mess with bees!
10. In Russia in 2009, a chemistry student mixing chemicals accidentally dipped which of these into an explosive substance before sticking it back into their mouth?

According to family, the student had the unusual habit of chewing gum while working with chemicals and coating it in a particular compound (citric acid) to alter its taste. While this would normally be harmless, one compound that they'd been working on at home had the privilege of being the wrong compound to be dipping food into. Although it's not known what the compound was, it's likely that saliva in the student's mouth came into contact with the substance when they placed the gum inside causing a small-scale explosion.

And so, that's why you never keep your food next to chemistry sets!
Source: Author kyleisalive 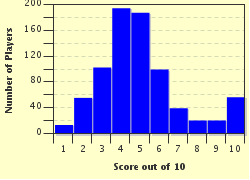 Related Quizzes
1. They Were Murdered Average
2. Such a Life, Such a Death Average
3. Unusual Deaths Average
4. Is This Any Way to Run an Airline? Average
5. How Did They Die? Tough
6. Famous Lives, (In) Famous Deaths Tough
7. On Christmas Day in the Mo(u)rning Average
8. Strange Ways To Die Tough
9. Not Quite Dead Yet... Difficult
10. Swinging in the Rain Average
11. It Happens to Us All in the End Average
12. A Fitting End? Very Difficult