They Were Murdered Trivia Quiz

We have had Death Quiz 2000, now let's see how extensive your knowledge of murder is. Welcome to the Murder Quiz!

Quiz Answer Key and Fun Facts
1. Which 'Hogan's Heroes' star was murdered in a motel room in 1978?

Bob Crane had fallen onto hard times in the late 1970s, mainly doing cheap stage productions. He also had a fondness for prostitutes and made a few x-rated home movies. His murder was never officially solved, as the person charged with the crime was acquitted.
2. Who murdered Lee Harvey Oswald in the basement of the Dallas Police Department on national television?

Jack Ruby shot suspected presidential assassin Lee Harvey Oswald only a few days after Kennedy's killing. This act made it virtually impossible to get to the bottom of who wanted Kennedy dead. Numerous conspiracy theories have been thrown about over the years. Ruby himself died of cancer not long after killing Oswald.
3. This madman murdered 33 young men in the late 1970s and was executed by the state of Illinois in 1994. Who was he?

Gacy murdered 33 young men in the years he lived in a Chicago suburb. He was finally investigated and most of the bodies were found in the dirt under his house. He was convicted in all counts and finally put to death in 1994.
4. In this, one of the most famous murder cases in Hollywood history, Elizabeth Short's nude and mangled body was found in a vacant lot. What was the Elizabeth Short case better known as?

Short, better known by the moniker The Black Dahlia, was an aspiring actress with jet black hair and pale white skin. Her murder, despite lack of stardom, caused a lot of speculation and a lot of fear. Despite the press coverage of the case, the murderer was never found.
5. We all remember that OJ was acquitted of killing his wife, Nicole Brown Simpson. Does anyone remember the name of the poor unfortunate friend of hers that was killed with her?

Ron Goldman was murdered at the same time as Nicole. Though a jury found Orenthal James Simpson not guilty, a civil jury found him liable for the deaths of Brown and Goldman. The Goldman family continues to hound OJ for every cent they can to pay towards their $33m judgement.
6. This Texas mother was convicted of the murder of her two young sons and is now sitting on Texas Death Row.

Routier still claims to be innocent of the charges and is fighting for her vindication. No execution date has been set for Darlie Routier.
7. The state of California claimed that Comic Actor Roscoe 'Fatty' Arbuckle raped and murdered this actress, but failed to convict him of the charges.

Rappe was not murdered, like the Hearst papers of the day would have you believe. The official cause of death was peritonitis most likely caused by a botched abortion. Three jury trials ensued before Arbuckle was rightly acquitted of the charges against him. Unfortunately, his career never recovered from the slander and he died a broken man in 1933.
8. Which 'My Sister Sam' star was murdered by an insane fan in 1989?

Schaeffer was shot to death by John Robert Bardo on July 18, 1989 in West Hollywood. Bardo is serving a life sentence for the killing, which prompted lawmakers to enact much more stringent stalking laws.
9. These young killers put fear in the hearts of high school students everywhere after their 1999 killing spree in Columbine High School.

Dylan Klebold and Eric Harris murdered 13 innocent people in their rampage on Columbine High School. They then committed suicide in the same library where they killed most of their victims.
10. Which star of the 1955 movie 'Rebel Without a Cause' was murdered?

Sal Mineo was a popular film star and teen idol in the 1950s and the early 1960s. He played the esoteric youth Plato in 'Rebel Without a Cause' with James Dean. He also released several rock and roll records, with the single 'Start Movin' (In My Direction)' reaching the number 9 position and staying in the charts for 13 weeks. Mineo was murdered by Lionel Ray Williams in 1976. Williams was convicted and sentenced to life in prison in 1979. Mineo's estate was worth less than $10,000.
Source: Author bolan 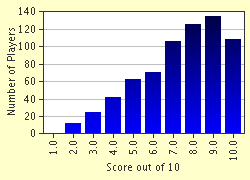 Related Quizzes
1. Strange Ways To Die Tough
2. Life is Short, Death is Long Easier
3. What in the World? Average
4. The Rest Of My Body, Please! Difficult
5. They Died Sad Deaths Far from Home Tough
6. Revenge Of The Pets Tough
7. A Fitting End? Very Difficult
8. I Should have Stayed in Bed! Average
9. A Sleep with the Fishes Average
10. Famous Lives, (In) Famous Deaths Tough
11. And So, That's Why You Never... Difficult
12. Executed! Average


Other Destinations
Explore Other Quizzes by bolan