It Happens to Us All in the End Quiz

We all have to die, but many famous people have managed to do so in memorable fashion....

Quiz Answer Key and Fun Facts
1. Russian poet Aleksandr Pushkin, U.S. Secretary of the Treasury Alexander Hamilton and American naval hero Stephen Decatur all died as a result of engaging in which pursuit?

Aleksandr Pushkin, Russia's greatest ever poet, is perhaps the most famous person killed as a consequence of a duel. He challenged his wife's alleged lover (her brother in-law) to a duel -- the 29th and, as it turned out, the last duel of his short life. During the duel, both men were shot but Pushkin died two days later aged just 37.
The most famous American duel took place at dawn on the banks of the Hudson River on July 11, 1804. The participants were former U.S. Secretary of the Treasury Alexander Hamilton (whose portrait has adorned the U.S. $10 bill since 1928) and the man who at the time was the 3rd Vice-President of the United States, Aaron Burr. Hamilton was shot and died in New York City the following day.
Commodore Stephen Decatur was an American naval hero from the War of 1812. In 1820, he faced off against a naval Captain who had once held the same rank as Decatur. More than a decade earlier, Decatur had been a member of a court-martial that found against the officer who later returned to haunt him. During the duel, both men were shot but Decatur died within hours.
2. Spaniard Francisco Cepeda, Englishman Tom Simpson and Italy's Fabio Casartelli have all died while competing in which sporting event?

Cyclist Francisco Cepeda died on Bastille Day 1935 whilst making the descent from the Col du Galibier. First climbed in 1911 and a regular Tour de France highlight, at 8,678 feet the Col du Galibier is frequently the highest point in the race.
The 29-year old Englishman Tom Simpson, the 1965 World Road Race champion, collapsed and died from heat exhaustion during the ascent of Mont Ventoux on July 13 during Stage 13 of the 1967 Tour de France. Known as one of the toughest climbs in the Tour, there is a memorial to Simpson near the summit of Mont Ventoux. The legendary Eddy Merckx came close to collapse whilst winning the stage here in 1970.
Fabio Casartelli, the 1992 Olympic Individual Road Race champion, died of head injuries sustained in a crash on the descent of the Col de Portet d'Aspet in the Pyrenees during the 1995 race.
3. What is the common factor in the deaths of former Rolling Stone Brian Jones, librettist W.S. Gilbert, poet Percy Bysshe Shelley and singer/songwriter Jeff Buckley?

The deaths of all four is attributed to drowning. The official cause of death of the 27-year old Brian Jones was 'death by misadventure', but he was found at the bottom of the swimming pool at his house in Sussex. Alcohol and drugs were present in his body in considerable amounts, which is probably how he fell into the pool in the first place.
The 74-year old W.S. Gilbert (of Gilbert & Sullivan fame) probably died from a heart attack, although the circumstances of his demise were that he was attempting to rescue two people who he was teaching to swim in the lake at his home in northwest London.
Poet Percy Bysshe Shelley died when his boat was caught in a storm off the Italian coast in 1822. The 30 year-old Jeff Buckley went swimming in his boots and all of his clothes, although this was not deemed to be a suicide attempt but a genuine accidental drowning.
Other famous people who had drowned include novelist Virginia Woolf (who did commit suicide), newspaper magnate Robert Maxwell (who 'fell' of his yacht), singer Whitney Houston (who overdosed and drowned in her hotel bathtub), and actress Natalie Wood (who died in mysterious circumstances while sailing).
4. Singers Marc Bolan and Eddie Cochran, drummer Cozy Powell and novelist Margaret Mitchell all died in car accidents. Which is the odd one out?

T.Rex lead singer Marc Bolan died in south London in 1977 when riding in a Mini driven by his girlfriend, Gloria Jones. Eddie Cochran was a passenger in a taxi on the M4 motorway in 1960 when the car blew a tyre and collided with a lamp-post. Singer Gene Vincent survived that crash. You might thing that Whitesnake drummer Cozy Powell is going to be the odd one out since he was the only one actually driving the car when the fatal crash occurred: he was both over the drink-drive limit and talking on a mobile phone when he crashed his Saab 9000 in 1998.

The odd one out, though, is Margaret Mitchell, author of "Gone with the Wind", since she was not actually riding in the car at the time of the accident. She was struck by a speeding car as she crossed the road in Atlanta GA in 1949.

Juan Ponce de León died in 1521 after being wounded by a poisoned arrow. Hermann Göring committed suicide by cyanide capsule hours before his scheduled hanging in 1946. Alan Turing apparently committed suicide by biting into an apple that he had injected with cyanide in 1954.

The most famous poisoning victim probably dates back to 339 BC, when the great Greek philosopher Socrates (pictured in statue form) was sentenced to execution by drinking hemlock.
6. Henry VIII's wives Jane Seymour and Catherine Parr, author Mary Wollstonecraft, and Theodore Roosevelt's first wife, Alice Hathaway Lee Roosevelt, all died as a result of doing what?

Two days after giving birth to Alice Lee Roosevelt in 1884, the 22-year old wife of the future U.S. President died from a combination of undiagnosed Bright's disease and childbirth complications, although it has also been suggested that toxemia of pregnancy (pre-eclampsia) was the sole cause of death.
Mary Wollstonecraft gave birth to her second daughter, Mary (who would go on to become more famous than her mother when she wrote "Frankenstein") on 30 August 1797. Puerperal fever was a common and often fatal occurrence in those days and Wollstonecraft died of septicaemia 12 days later.
Two of Henry VIII's wives died of puerperal fever (childbirth fever) following childbirth. Jane Seymour, his third wife, gave birth to the coveted male heir, the future King Edward VI of England, on October 12, 1537. The Queen picked up an infection during the birth and died 12 days later. The 35 year-old Catherine Parr, Henry's sixth wife and the only one to survive being married to him, was on her fourth marriage in 1548. On August 30, she gave birth to her only offspring, a daughter named Mary after her stepdaughter, and the Queen Dowager died six days later.
7. Actor Roy Kinnear, tennis legend Maureen Connolly, songwriter Cole Porter and actor Christopher Reeve were all involved in serious accidents, although only Kinnear actually died as a direct result. What were they all riding when the accidents occurred?

The 54-year old British actor Roy Kinnear fell from a horse during the making of the film "The Return of the Musketeers" in 1988. He sustained a broken pelvis and died of a heart attack in hospital the following day. The 18-year old Maureen Connolly (aka "Little Mo") became the first woman to win the tennis grand slam in 1953.

Her career was ended the following year when the horse she was riding was frightened by a passing cement mixer and her right leg was crushed in the resulting accident. She subsequently died of cancer aged just 34 in 1969.

The 46-year old Cole Porter's legs were crushed in a riding accident in 1937, leaving him largely crippled. His right leg was amputated 20 years later. "Superman" actor Christopher Reeve was left as a quadriplegic at the age of 42 after being thrown from a horse during an equestrian competition in 1995. The picture is a self-portrait by English artist George Stubbs, who is best known for his paintings of horses.
8. Antarctic explorer Roald Amundsen, singer Jim Croce, baseball legend Roberto Clemente and United Nations Secretary-General Dag Hammarskjöld all died while traveling by which mode of transport?

Four-time batting champion and the first Latin American player enshrined in the Baseball Hall of Fame, Roberto Clemente was also well known for his philanthropic work. On New Year's Eve 1972 he was aboard a flight carrying supplies to victims of an earthquake in Managua, Nicaragua.

The flight crashed near Puerto Rico and Clemente's body was never found. Norwegian Roald Amundsen, who had beaten Scott in the race to the South Pole in 1911, was on a flight that disappeared over the Barents Sea whilst on a rescue mission in the Arctic. 30-year old singer Jim Croce died whilst flying between concerts: his small plane took off from Natchitoches, Louisiana in thick fog and hit a pecan tree at the end of the runway. Dag Hammarskjöld was called "the greatest statesman of our century" by J.F. Kennedy.

He was killed in a 1961 plane crash over Northern Rhodesia (now Zambia) in circumstances that led many to believe the plane was shot down. Hammarskjöld was posthumously awarded the Nobel Peace Prize later that year. The photo shows a statue honoring Alcock & Brown at Heathrow Airport.
9. Poet Elizabeth Barrett Browning, novelist George Orwell, painter Amedeo Modigliani, composer Frédéric Chopin and U.S. Presidents James Monroe and Andrew Jackson all died from which ailment?

James Monroe was the fifth U.S. President, and the last of the "Founding Fathers" to hold that office. He died on July 4, 1831, 55 years after the signing of the Declaration of Independence, and thus became the third President to die on Independence Day (Adams and Jefferson had both died on July 4, 1826). Nicknamed "Old Hickory", the seventh President, Andrew Jackson, was a veteran of the War of 1812, a slave-holder and a regular duelist.

The photo shows a bust of Jackson in Pensacola, Florida. George Orwell contracted TB in the 1930s and lived with it for most of two decades before it finally killed him aged 46 in 1950.

His greatest novel, "Nineteen Eighty-Four", published in 1949, was written during the final stages of his illness.
10. British statesman and MP for Liverpool, in 1830 William Huskisson became the first person to be killed by what?

An influential figure in the creation of the British Empire, William Huskisson attended the opening of the Liverpool and Manchester Railway riding in the Duke of Wellington's train on September 15, 1830. When the locomotives stopped to take on water, many passengers alighted despite having been warned by staff against doing so. Huskisson was shaking the Duke's hand when "Stephenson's Rocket" approached on the adjacent track.

He attempted to climb back onto his train but fell directly into the path of the oncoming "Rocket".

He was rushed to hospital (in a train driven by Stephenson himself) but died of his injuries later that same day, thus becoming the first person killed in a railway accident. The photo shows a painting of George Stephenson that hangs in New York's "Portrait Gallery of Eminent Men and Women in Europe and America".
Source: Author EnglishJedi 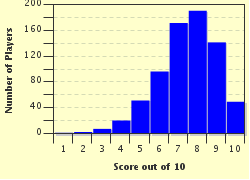 Related Quizzes
1. Strange Ways To Die Tough
2. Life is Short, Death is Long Easier
3. What in the World? Average
4. The Rest Of My Body, Please! Difficult
5. Revenge Of The Pets Tough
6. A Fitting End? Very Difficult
7. I Should have Stayed in Bed! Average
8. A Sleep with the Fishes Average
9. Famous Lives, (In) Famous Deaths Tough
10. And So, That's Why You Never... Difficult
11. Executed! Average
12. Heroic Lives, Dramatic Exits Tough