In some cases a person's death is remembered more than their achievements in life. In this quiz you need to select the individual who died in unusual circumstances. Not as depressing as it sounds.

Quiz Answer Key and Fun Facts
1. Who ate poisoned tea cakes, drank poisoned wine, was shot several times, beaten, and finally bound and thrown into a river where he finally died by hypothermia and drowning?

The assassins first laced tea cakes and wine with cyanide. This apparently had no effect. He was then shot several times and they thought he was dead, but he opened his eyes. Next they beat him, bound him, and dumped him in the river.

These events are probably both real and exaggerated since the accounts came from the murderers. Hypothermia and drowning were probably the coup de grace.

Rasputin aroused jealousies as it was believed he had too much influence on the Russian royal family.
2. Who was the first major league baseball player to be killed on the field?

After this incident, baseball banned the spit ball or placing any foreign substance on the ball as this was believed to be the reason that the pitch came inside and Chapman did not see it. However, some 30 years went by before batting helmets were required.
3. Who died when the long scarf she was wearing got tangled around the open wheel of a car?

Isadora Duncan lived life to the hilt. She left a trail of lovers and alcohol in her wake. The film "Isadora" (1968) starring Vanessa Redgrave is based on her life. She is regarded as an innovator in modern dance.
4. What actor died while filming a war scene in a movie when a helicopter crashed and decapitated him?

Morrow was playing a bigot who goes back in time to witness the horrors of prejudice. Morrow is brutalized by Nazis, nearly lynched by the KKK, shot by an American patrol in Vietnam, and finally becomes a Holocaust victim. "Twilight Zone, The Movie" was the film.

The helicopter scene is not used in the picture. Morrow's break-through role was a rebellious teenager in "Blackboard Jungle".
5. In order to make a dramatic entrance to the ring, this professional wrestler descended 76 feet by harness and cable but released the escape lever too soon and fell to his death. Who was he?

Hart was a member of a renowned Canadian family of wrestlers. His older brother Bret was better well known. Although the event was being televised live, the accident was not seen by the TV audience, due to tape delay, although it was described by the ringside announcer.
6. This Australian wildlife expert and TV personality was killed when a stingray punctured his heart while he was filming a documentary.

Steve Irwin was generally known as "The Crocodile Hunter", noted for his daring encounters with land and sea creatures. His television productions were well received as he always seemed to be pushing the envelope. Although his death was filmed, the tape was destroyed.
7. Because he did not feel worthy of being compared to Jesus, he was crucified on an upside down cross. Who was this apostle?

St. Peter is also regarded as the first Bishop of Rome. As the number of professed Christians grew, they became a target of Roman persecution.
8. After drinking seven or eight glasses of wine, she fell off her yacht and drowned.

There have always been conspiracy theories about her death. Robert Wagner, her husband, was rumored to be jealous of her relationship with Christopher Walken, who was then making a film with Natalie and who was on the yacht that night. Probably another urban legend.
9. This novelist and short story writer died when he accidentally swallowed a toothpick embedded in a martini olive.

Anderson is most noted for his collection of short stories called "Winesburg, Ohio". As a writer he greatly influenced such writers as Ernest Hemingway, William Faulkner, John Steinbeck and many others.
10. What French playwright and actor died from a coughing fit while performing in his play "The Imaginary Invalid"?

Moličre lived at a time when artists had to have a patron (someone who would support them because of his art). He had several, including the King of France. He also had a performance theatre group, in which he was the leading actor. Some of his plays were "School for Wives" (1663), "The Hypocrite" (1664), and the ironic "Imaginary Invalid" (1673).

The performance was in front of Louis XIV. Even though he broke down on stage with a coughing fit, he insisted on finishing the play. It is believed that he contracted tuberculosis while in a debtors' prison as a young man.
Source: Author Rehaberpro 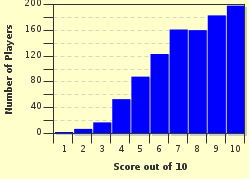 Related Quizzes
1. Strange Ways To Die Tough
2. Life is Short, Death is Long Easier
3. What in the World? Average
4. The Rest Of My Body, Please! Difficult
5. They Died Sad Deaths Far from Home Tough
6. Revenge Of The Pets Tough
7. A Fitting End? Very Difficult
8. I Should have Stayed in Bed! Average
9. A Sleep with the Fishes Average
10. Famous Lives, (In) Famous Deaths Tough
11. And So, That's Why You Never... Difficult
12. Executed! Average