Such a Life, Such a Death Trivia Quiz

Some odd facts about the deaths of famous people. Can you identify them?

Quiz Answer Key and Fun Facts
1. This American dancer was killed by a scarf in 1927! As she drove away from her home in Nice, her neck was broken as her long scarf got caught in the wheel of the Amilcar sports car she was intending to buy. Who was this unlucky lady?

Born Angela Duncan in San Francisco in 1878, Isadora was as renowned for her flamboyant lifestyle as her revolutionary dance routines. She was described by George Bernard Shaw as "A woman whose face looked as if it had been made of sugar and someone had kicked it."
2. Which British Queen suffered from gout and had to be buried in an enormous square coffin because her body was so bloated?

Queen Anne was born in 1665 and suffered from ill health all her life. She had seventeen children, but all were either stillborn or died young - the longest survivor being William, Duke of Gloucester, who died at age 11, two years before Anne ascended the throne in 1702.
3. This Russian novelist suffered from epilepsy and long death-like trances, which caused him to dread being buried alive. In the event, he moved a heavy wardrobe which caused a fatal lung haemorrhage. His funeral procession was the largest ever seen in Russia. Who was this famous author of "Crime and Punishment"?

Dostoevski was born in Moscow in 1821 and was 59-years-old when he died. Although he had many admirers, he also alienated many people with his strident opinions and savage humour. D.H. Lawrence referred to him as a "rat slithering along in hate" and Turgenev thought of his as a "pimple on the face of literature."
4. This American author, who was born on the day that Halley's comet visited Earth, predicted that he would die when it returned. This he duly did, seventy four years later. He had refuted rumours of his earlier death with the words "Report of my death greatly exaggerated." Who was he?

Born Samuel Longhorne Clemens in 1835, Mark Twain had a varied career before settling into writing. He was a Mississippi river pilot, a soldier in the Civil War, goldminer and publisher, during which time he published the Memoirs of President Ulysses Grant.
5. This Egyptian queen committed suicide by putting an asp to her breast and letting it bite her. Who was Antony's bereft lover?

Cleopatra VII was born in 69BC and, in accordance with the customs of the time, married her brother. She later became the mistress of Julius Caesar and bore him a son. After his murder she lived with Mark Antony and had three children with him.
6. Which English poet, author of "Queen Mab" died in a boating accident and could only be identified by the books in his pockets, as his face had been so devoured by fishes?

Born in 1792, Shelley didn't receive great recognition while he was alive and he had to pay for 250 copies of "Queen Mab" to be published himself. After his death Byron asked for his skull, but this requested was refused by his friends, who had known Byron to use a skull to drink from.
7. Which Russian ruler suffered a fatal stroke in 1796 whilst sitting on the toilet?

Rumours surround the death of Catherine II, but she in fact died in St. Petersburg two days after falling off her commode following the stroke.
8. If he had fallen on the bed he would have lived, but when this French novelist's bedroom filled with carbon monoxide fumes from a faulty fire he fell to the floor. Who was this author of "Germinal"?

Zola's wife, Gabrielle, did fall onto the bed and she survived.
9. Following the death of this American inventor all non-essential lights in the USA were extinguished for one minute. The lights on Broadway were dimmed and the Statue of Liberty lost her torch. Holder of over 1,000 patents, his inventions included the phonograph and paper ticker tape. Who was this man with all the bright ideas?

Thomas Alva Edison was born in Ohio in 1847 and during his lifetime managed to fill 3,400 notebooks with his ideas, of which he had many. His motto was, "Genius is one per cent inspiration and 99 per cent perspiration."
10. This magician and escapologist died trying to prove how strong he was, when a man took up the challenge of punching him in the stomach as hard as he could. Unfortunately our hero did not have time to tense his stomach muscles, and he died of peritonitis from the blow. He used a coffin in his 'buried alive' act - this now fulfulled its role! Who was Erich Weiss?

Erich Weiss was born in Budapest, Hungary in 1874, emigrating to America some four years later. He took the name Houdini from a man he much admired - Robert Houdin, a French magician. He found fame through his amazing escapes and became known as "The Handcuff King". One of the pallbearers at his funeral was said to have whispered, "I bet you a hundred bucks he ain't in here."
Source: Author fringe 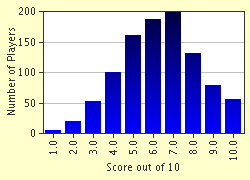 Related Quizzes
1. They Were Murdered Average
2. Missing Average
3. Unusual Deaths Average
4. Is This Any Way to Run an Airline? Average
5. How Did They Die? Tough
6. Famous Lives, (In) Famous Deaths Tough
7. On Christmas Day in the Mo(u)rning Average
8. Strange Ways To Die Tough
9. And So, That's Why You Never... Difficult
10. Not Quite Dead Yet... Difficult
11. Swinging in the Rain Average
12. It Happens to Us All in the End Average