Match the two names to the correct shared surname.

Meriwether Lewis (1774-1809) was an American soldier and explorer. He teamed up with William Clark to explore the land west of the Mississipi.

Lennox Lewis was a professional boxer who competed between 1989 and 2003. He won the heavyweight title three times and was the last 'undisputed' heavyweight champion.
2. Carly and Paul

Carly Simon is a singer and children's author. Daughter of book publisher Richard Simon, Carly rose to fame in the 1970s. Her hits include "Anticipation" and "Nobody Does It Better".

Paul Simon (1928-2003) was an American politician from Ohio. In 1988, he unsuccessfully ran for the Democratic Party's presidential nomination.
3. Harlan and George

Harlan Sanders (1890-1980), known as the "Colonel" was an American entrepreneur. He was the founder and spokesperson for Kentucky Fried Chicken.

Miles Davis (1926-1991) was an American composer and jazz trumpeter. He was a pioneer and one of the most influential musicians of the 20th century.

Geena Davis is a former model and actress who has appeared in movies like "Thelma and Louise" and "Beetlejuice". She also competed as an Olympic archer in 2000.
5. Peyton and Chelsea

Peyton Manning is a former National Football League quarterback. He primarily played for the Indianapolis Colts, but ended his career with the Denver Broncos.

Chelsea Manning is a transgender former soldier who, in 2013, was convicted of violations of the Espionage Act. She disclosed hundreds of thousands of sensitive military documents to WikiLeaks. Her sentence was commuted by President Obama.
6. Channing and Art

Channing Tatum is an actor, dancer and former stripper. His breakout role was in "Step Up", a 2006 dance film. He has also appeared in "Magic Mike" (2012).

Art Tatum (1909-1956) was a jazz pianist. Known for his "radical reinventions of pop standards", he was one of the most influential artists in the history of jazz.
7. Ezzard and RuPaul

Ezzard Charles (1921-1975) was a professional boxer and one-time World Heavyweight Champion in 1950. He fought in three different weight classes, and ended his career with a record of 93 wins, 25 losses and one draw.

RuPaul Charles is a mononymous, multi-talented actor and television personality. Known as a drag performer, he received a Primetime Emmy Award in 2016 for his show, "RuPaul's Drag Race".
8. Cecil and Donnelly

Cecil Rhodes (1853-1902) was a British mining magnate and South African politician. He served as Prime Minister for the Cape of Good Hope Colony from 1890 to 1896. He was an ardent imperialist and is also famous for the highly esteemed Oxford scholarships established under the terms of his will.

Donnelly Rhodes is a Canadian actor, born in Winnipeg in 1937. He has appeared in movies and on TV. His most famous role is, perhaps, as escaped prisoner Dutch Leitner, on the TV comedy "Soap".
9. Ilka and Chevy

Ilka Chase (1905-1978) was an American actress and writer. The daughter of "Vogue" editor-in-chief, she made her Broadway debut in 1924 in "The Red Falcon", and later appeared in "The Women" and "Barefoot in the Park".

Actor and comedian Chevy Chase was one of the original "Not Ready for Prime Time Players" on "Saturday Night Live". He has also appeared as Clark Griswold in the "National Lampoon" movies.
10. Elliott and Glenn

Elliott Gould began his film career in the 1960s. His films include "M.A.S.H." and "Ocean's Eleven". He also played Jack Geller, Ross and Monica's father, on "Friends".

Glenn Gould (1932-1982) was a Canadian classical musician, and one of the most celebrated pianists of the 20th century. He was known for his interpretations of Johann Sebastian Bach's music.
Source: Author nyirene330 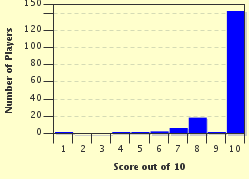