In each question, a couple people with the same last name are mentioned...you have to figure out what that name is given the clues...good luck!

Quiz Answer Key and Fun Facts
1. These two actually have the same first AND last names. One was a 16th-17th century English philosopher and politician....the other was a 20th century English artist. What was their full name?

2. One was an actor who played roles in movies such as 'Dr. Strangelove' and 'Patton', the other the author of 'Ivanhoe'. What was their shared last name?

George C. Scott and Sir Walter Scott
3. One was the founder of the Mormon church, the other was the father of modern economics. What was their common last name?

Joseph Smith and Adam Smith.
4. One was a great Hong Kong and American action film actor, the other was a defender of Richmond during the U.S. civil war. What was their common last name?

Bruce Lee and Robert E. Lee
5. These two gentlemen also shared the same first and last names. One was a famed Welsh actor who played roles in 'Cleopatra' and 'Who's Afraid of Virginia Woolf'. The other was a 19th century British adventurer who explored the source of the Nile. What was their shared full name?

6. This last name was shared by the English author of 'Tess of the D'Urbervilles' and the American film comedian who teamed with his partner Laurel. What was their last name?

Thomas Hardy and Oliver Hardy
7. One of these gentlemen was a British sculptor of the 20th century, well known for his monumental semi-abstracts, such as 'Recumbent Figure', the other is a modern British actor who appeared in the movie '10'. What last name do they share?

Henry Moore and Dudley Moore
8. One was the founder of the Salvation Army, the other was the wife of Henry Luce, founder of Time and Life magazines. Which homonymic last name did they share at birth?

William Booth and Clare Boothe Luce (born Ann Boothe).
9. One was a failed presidential Democratic and Independent presidential candidate from the late 1960s, early 1970s, the other was a right-wing Republican politician who began a wave of anti-communist hysteria which ran until his being discredited in 1954. What was their shared last name?

Eugene McCarthy and Joseph McCarthy
10. She danced with Fred Astaire, he was one of the original singing cowboys. What last name did they share? 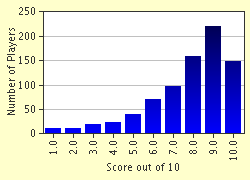