These amazing people have created incredible things to enrich our lives. Let's see if you can figure out who they are from my clues.

Quiz Answer Key and Fun Facts
1. Here's one little invention none of us can seem to do without. Who transformed the world of computing by developing the World Wide Web in 1990?

Sir Tim Berners-Lee is an Oxford educated engineer who first proposed his idea for the World Wide Web in 1989 while he worked at CERN, the European Particle Physics Laboratory in Geneva, Switzerland. Among the many honours bestowed upon him, he was named "One of the 100 Great Minds of the Century" by 'Time' magazine in 1999 and subsequently knighted for his services to the global development of the internet by Queen Elizabeth II in 2004.
2. Where would we be without those good old bifocals that more and more of us baby boomers have to use to stop us from squinting at our computer screens. Who's the inventor?

The world owes a great debt to Benjamin Franklin. He was a self-taught scientist, inventor, ambassador and stateman, and one of the founding fathers of the United States of America. He died in 1790 at the age of 84 having lived a life that most us could only dream about.
3. If it weren't for this fellow, we'd still be wearing flannel britches with suspenders! Who invented denim overalls in 1873 which, thankfully, evolved into the faithful and much-loved denim jeans as we know them today?

Levi Strauss was a German immigrant. He and his family arrived in New York in 1847. When he heard of the California Gold Rush, he travelled to San Francisco in 1853 to set up a branch of the family dry goods business. In 1873, he and his partner, Jacob Davis, created an innovation - riveted work pants - that revolutionized the clothing industry.
4. The New York Times Sunday crossword is a favourite pastime of mine to keep those brains cells firing. Who was the innovative thinker who introduced this wonderful form of entertainment in 1913?

Arthur Wynne came to New York from Liverpool, England. His first puzzle was called a "word-cross" which was in the shape of a diamond with no black spaces. It was published in the New York World newspaper on December 12, 1913. Little did he know how popular his idea would become.

The New York Times didn't publish their famous crosswords until 1942 despite the puzzle's earlier popularity.
5. This nifty little creation has been a wonderful addition to the modern home and office. Who, quite by chance, invented the Post-It Note?

Fry and Silver worked for 3M when they developed the Post-It Note. In 1968, Silver invented a glue that wouldn't stick as well as he would have liked. Four years later, Fry discovered that, when applied to his hymm book markers, the glue wouldn't damage the paper when the markers were removed. Voila! The perfect invention. Shareholders of the company continue to be happy about that serendipitous event.
6. My kids can play this game for hours. I hope it will teach them how to manage their money when they finally start to earn some! Who invented the world's most popular board game, Monopoly?

Charles Darrow lost his job in sales after the stock market crash of 1929. He'd seen neighbours playing a crude, home-made version of a game which involved the buying and selling of properties. Darrow took the idea and developed it into his game of Monopoly. He became the first millionaire board game designer in history.
7. No more quills and messy ink pots/ink blots for us thankfully! Who can we thank for inventing the fountain pen?

Waterman opened a factory in Montreal in 1899 but, sadly, died two years later so didn't live to see the huge success his invention brought. Vintage Waterman pens can sell for thousands of dollars.
8. The crop rotational method revolutionized modern farming. Which American genius was responsible for developing this and many other inventions?

Carver was born into slavery in Missouri prior to the abolition of slavery in 1864. Despite his many inventions, his greatest accomplishment was disavowing others of the widespread belief that the black race was intellectually inferior. I think he succeeded nicely.
9. Which Englishman invented and patented the first steam engine in 1698?

James Watt is often credited with inventing the steam engine, however, the work he did 75 years after Savery's invention radically improved existing engine designs. My husband's family are proud descendants of Savery.
10. Those hockey nights in Canada just wouldn't be the same without the contribution of which Italian-American who revolutionized the fine art of hockey rink grooming in 1949?

During a hockey game, the surface is shaved away by the player's skates and becomes very patchy and difficult to skate on. After each period of play, the Zamboni removes the shavings and lays down a new surface by applying hot water to the cleaned ice. It was a fine, fine thing Frank Zamboni did for the game of hockey. He was inducted, posthumously, into the Hockey Hall of Fame in 2009.
Source: Author Barbarini 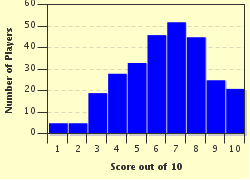 Related Quizzes
This quiz is part of series Barbarini's Quizzes:

Have a go at my quizzes and see how you do.


1. Something New Average
2. Old Man River Easier
3. Let's Hear it for the Girls Average
4. I Love a Good Yarn! Average
5. Around Europe on a Magical Mystery Tour Very Easy


Other Destinations
Explore Other Quizzes by Barbarini