I've always been an admirer of Samuel Johnson, both as a man and as a writer. If you share my tastes, can you answer the following questions on his life?

Quiz Answer Key and Fun Facts
1. In which cathedral city was Johnson born on September 18, 1709?

Johnson seems to have retained an affection for his home town. There are at least two references to it in his Dictionary.
2. As a 2-year-old child Johnson was brought to London to be touched by the monarch, in the hope that the touch would cure him of scrofula. Who was the monarch?

Scrofula was known as the 'King's Evil'. The belief that it could be cured by the royal touch goes back at least as far as the reign of Edward the Confessor. Anne was the last sovereign to 'touch for the evil'. In Johnson's case, the cure didn't work.
3. Johnson's college days were cut short by poverty, and he left without taking a degree. Which university did he attend?

Johnson spent four terms at Pembroke College, Oxford before returning to Lichfield. By all accounts he was not an easy student to teach.
4. After an unsuccessful spell as a schoolmaster, Johnson left Lichfield for London. He was accompanied by a former pupil, who made a name for himself in the theatre. Who was this companion?

In later life Johnson and Garrick liked to recount the tale of their journey, but probably exaggerated their hardships. Johnson's reported statement that they arrived in London with fourpence between them is almost certainly false.
5. One of Johnson's first literary works was the satirical poem entitled 'London'. It is based on a satire about Rome by which Roman poet?

Like Juvenal's Rome, Johnson's London is depicted as a city of squalor, violent crime, immorality, foreign influence and political corruption in which a decent man can't hope to make a living. But in time Johnson came to believe that 'when a man is tired of London, he is tired of life'.
6. Who was the nobleman and politician to whom Johnson dedicated the Plan for his Dictionary?


Answer: The Earl of Chesterfield

The Earl took little interest in the project after it was launched, but commended it heartily when it was completed. Johnson's letter to Chesterfield, declining his lordship's belated support, is one of the greatest put-downs in the language.
7. In January 1759 Johnson produced 'Rasselas', and asked for an advance of thirty pounds from his publisher. For what was this money needed?

Sarah Johnson died in Lichfield at the age of ninety. Although Johnson had never showed any strong emotions towards his mother, he was devastated by her death.
8. In 1777, Johnson played a leading part in an unsuccessful campaign to secure a reprieve for William Dodd, a clergyman who had been sentenced to death. What was Dodd's crime?

Dodd was a popular preacher and had been tutor to the fifth Earl of Chesterfield, the son of Johnson's patron. He ran into debt and forged Chesterfield's signature to a bond. The death sentence was not commuted, and on June 27, 1777 he was carted from Newgate Prison to Tyburn and publicly hanged.
9. At dinner on April 15, 1778, Johnson declared 'I am ready to love all mankind, except ________________'. Complete his sentence.

Johnson expressed his views on 'the ridiculous claims of American usurpation' in his usual forthright way. They can be found in 'The Patriot' and 'Taxation No Tyranny', published in 1774 and 1775.
10. Johnson had a cat, whom he described as 'a very fine cat indeed' and for whom he bought oysters. What was the cat's name?

As a cat-lover myself, I find Johnson's fondness for Hodge one of his most endearing traits. I wish Boswell had told us more about Hodge, and I'm grateful to Polygon for pointing out that there's more information about him at http://www.moggies.co.uk/stories/finecat.html
Source: Author TabbyTom 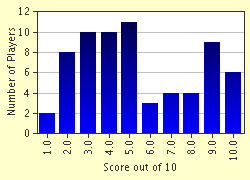 
Other Destinations
Explore Other Quizzes by TabbyTom