The Life of Matthew Henson: A Resourceful Explorer Quiz

Explorer Matthew Henson was an African-American who lived an interesting life, due to his resourceful nature in overcoming obstacles that stood in his way. He played a pivotal role in the discovery of the North Pole. What do you know about him?

Share on Facebook
Share on Twitter
Share by E-Mail
Author
sashby87
Time
4 mins
Type
Multiple Choice
Quiz #
276,469
Updated
Dec 03 21
# Qns
10
Difficulty
Average
Avg Score
7 / 10
Plays
413
This quiz has 2 formats: you can play it as a or as shown below.
Scroll down to the bottom for the answer key.

Quiz Answer Key and Fun Facts
1. What is the achievement that Matthew Henson is most recognized for?

At 11 years old, after suffering a severe beating by his stepmother, Nellie, Matthew Henson ran away from home to Baltimore, Maryland from Washington, D.C. He hoped to find work and adventure on the high seas.
3. Matthew Henson was hired as a cabin boy by Captain Childs of the merchant ship the 'Katie Hines'. What was taught to Henson while on the ship, which helped strengthen his foundations as a future explorer?

Matthew Henson was befriended by Captain Childs of the merchant ship the 'Katie Hines'. Childs hired Henson as a cabin boy and treated him like a son, teaching him math, history and navigation. These subjects would be the building blocks for his future Arctic exploration. Matthew Henson traveled around the world with Childs to places such as China, Japan and the Black Sea.
4. Matthew Henson got married in 1906 before leaving on another expedition with Robert Peary. Whom did he marry?

Matthew Henson got married for the first time in 1891 to Eva Flint prior to his exploration of Greenland with Peary. She grew tired of his constant travels (a key aspect of being an explorer is that you can't sit at home) and in 1897 and they were divorced.

He married Lucy Jane Ross in 1906 after a two year courtship. However, he later fathered a son with an Inuit woman named Akatingwah in Greenland. The son was named Anaukaq. Because of this son Henson has a number of descendants living in Greenland today.

Rosetta Douglass was the oldest daughter of abolitionist Frederick Douglass.
5. Matthew Henson and Robert Peary, engineer & explorer, first met in Washington, DC as Peary was preparing for a surveying trip on behalf of the U.S. government in Nicaragua. Henson was initially hired as Peary's valet. In what year did they first meet?

They met in 1887 in Washington, D.C. Henson was working as a store clerk when Peary hired him but later proved to be an invaluable assistant, confidante and friend. Peary once said about Henson "I can't get along without him."

1866 is the year Matthew Henson was born.

1906 is the year Henson Bay in the Canadian Northwest Territories was named by Robert Peary as a tribute to Matthew Henson.
6. The US government hired Robert Peary to explore the possibility of building a canal. Which oceans would the canal connect?

In 1881 Robert Peary joined the U.S. Navy Civil Engineers Corps. It was in this capacity that he began work on the Inter-Oceanic Ship Canal Project, which resulted in the Panama Canal. In 1887 Robert Peary hired Matthew Henson as an assistant to join him on his second voyage to Nicaragua.

This project was exploring the possibility of building a canal that would connect the Atlantic and Pacific oceans through some section of Central America. The Panama Canal would eventually be built in 1914. While the canal is only 40 miles long, to get from the starting point in the Atlantic Ocean to the ending point in the Pacific Ocean without going through the canal, would require a ship to travel approximately 3,500 nautical miles.
7. Who were the aboriginal people that Matthew Henson and Robert Peary met, befriended and were assisted by throughout their Arctic exploration?

Inuit is a the term used to refer to a group of indigenous peoples inhabiting the northern most regions of Alaska, Greenland, and Canada. It is noted by numerous sources that a key example of Henson's resourcefulness was his ability to master the Inuit language and being able to communicate with the men who were vital to the trip's success. Four Inuit men (Ootah, Seegloo, Ooqueah and Egingwahwere) were a part of Peary's expedition that reached the North Pole. Don't you think it would be interesting to learn more about what happened to them after the trip and their legacies?

The Temne are a large ethnic group in the West African country of Sierra Leone, which is near the equator. Temne have grown accustomed to living in an area where it can be very warm.

Yup'ik, are a group of indigenous people who know how to survive in extreme cold. They can mainly be found in parts of Russia and Alaska.

Navajo refers to members of the Navajo nation, a tribe of Native Americans found in a section of the country called "Four Corners". "Four Corners" refers to the location where you can stand and be in four states (Utah, Arizona, New Mexico and Colorado) at the same time. The Navajo nation occupies a pretty large land area. If it was recognized as a state it would have a larger land area than: Maryland, New Hampshire, Vermont, New Jersey, Massachusetts, Hawaii, Delaware, Connecticut, Rhode Island and the District of Columbia.
8. Who was initially honored as the sole discoverer of the North Pole?

Peary initially received all of the credit for the discovery of the North Pole on April 9, 1909, despite Henson reaching the pole before him.

Matthew Henson lived in relative obscurity for the rest of his life. Some attribute his lack of recognition to the fact that he was an African-American and the racial climate of the period.

Dr. Frederick Cook had claimed to have reached the North Pole previously to Perry and Henson, but his claims could not be supported by factual data and were considered a hoax by the scientific community.
9. On the 79th anniversary of the discovery of the North Pole, who granted permission for Matthew Henson to be buried in Arlington National Cemetery, next to Robert Peary?

In 1987, President Ronald Reagan granted permission for Matthew Henson to be buried in Arlington National Cemetery, next to Robert Peary.
10. What honor has been bestowed on Henson in acknowledgment of his achievements?

Henson received major awards and forms of recognition, including: The Navy Medal in 1945 (it is claimed by some that he had to receive it in private due to the racial prejudices of the times); An oceanographic survey ship - the U.S.N.S. Henson - was commissioned in 1996; and the National Geographic Society's Hubbard Medal was awarded to him posthumously in 2000.

A Pulitzer Prize is an annual award given to writers. Toni Morrison (1988) and Trymaine Lee (2006) are examples of past winners.

A Nobel Peace Prize is an award given for advancing peace in the world, past winners have mainly received it for their leadership, diplomacy or their advocacy. Ralph Bunche (1950) and Martin Luther King, Jr. (1964) are noted winners.

A Gold Star is something we all hope our fourth grade teacher places on our essay.
Source: Author sashby87 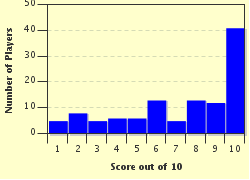 
Other Destinations
Explore Other Quizzes by sashby87