Hi, this quiz contains questions about the exploits of one of the most notorious gangsters that lived during the Depression Era. The real John Dillinger was nothing like the movies.

Quiz Answer Key and Fun Facts
1. What crime did John Dillinger do that landed him his first prison sentence?


Answer: He robbed a grocery store.

John Dillinger's first serious attempt at robbery was to rob a grocery store. The robbery netted him exactly $120 and a 10 year sentence.
2. While doing his first sentence in 1925, what did John Dillinger say about his future?


Answer: "I will be the meanest one you ever saw."

John Dillinger was embittered at having received such a long sentence, and vowed he would be the meanest one you ever saw.
3. What was first thing John Dillinger did upon being released from prison?


Answer: He robbed a bank.

The first thing John Dillinger did upon being released from prison after serving eight years of his 10 year sentence was to rob a bank. He was captured shortly after the robbery and was imprisoned once more.
4. How did John Dillinger escape from prison in 1933?


Answer: His gang helped him break out.

The 'first' Dillinger gang helped John Dillinger escape from prison in 1933. That gang consisted of Oklahoma Clark, Harry Pierpont, Boobie Clark, and Red Hamilton.
5. The Division of Investigation (DOI), was called in to pursue the Dillinger gang. What did the DOI later become known as?

The DOI later became the FBI. John Dillinger and his gang were very quickly becoming notorious for bank robbery.
6. What was public perception of the Dillinger gang?

The public perception of the Dillinger gang was so favorable that many people applauded their exploits. During the Great Depression, people saw banks as the contributor to the bleak economy and unemployment.
7. How did John Dillinger escape from jail a second time?


Answer: He carved a wooden pistol.

The second escape is what John Dillinger is most famous for. He carved a wooden pistol. What remains a greater mystery is how was he able to obtain wood, a carving tool and paint.
8. What was the name of John Dillinger's girlfriend?

John Dillinger's girlfriend was Evelyn 'Billie' Frechette. She met Dillinger in 1933 and is remembered as his girl. She was captured and served two years in prison for harboring him.
9. How many members of the second Dillinger Gang were killed in the shootout at Little Bohemia Lodge?

The FBI despite having the element of surprise, failed to kill or capture any members of the Dillinger Gang during the shootout at the Little Bohemia Lodge.
10. John Dillinger met his end upon leaving the Biograph Theatre in Chicago. What sort of movie had he been watching that evening? 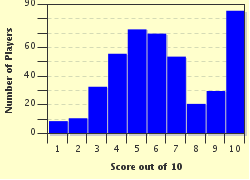 
Other Destinations
Explore Other Quizzes by beterave