Test your knowledge and learn more about one of history's most famous and accomplished explorers, Captain James Cook. All questions are multiple choice.

Quiz Answer Key and Fun Facts
1. James Cook was born in the village of Marton, North Yorkshire in 1728. His family moved to the nearby town of Great Ayton where he received his early education before leaving for sea. What stands in Great Ayton today to commemorate this great explorer?

The schoolhouse that Cook attended from 1736-1741 has become a museum and there is a commemorative plaque on the back wall. The monument, erected in 1827, is located on Easby Moor high above the town and is 51 feet high. The sculpture is the newest tribute to Cook. Unveiled in 1997, it is the work of artist Nicholas Dimbleby. It is an image of Cook at the age of sixteen, looking towards the town of Staithes, where his love of the sea began.

James Cook's father managed the farm of Thomas Skottowe, who paid for the education of young James. At sixteen, James moved to Staithes on the coast of England where he worked in a store for more than a year before joining the merchant navy in Whitby. Cook's mother Grace is buried at All Saints' Church in Great Ayton, along with five of James' siblings. The Cook Country Tour in North Yorkshire is marked by road signs retracing the steps of Cook's early life. There are numerous places of interest to visit.
2. After serving in the merchant navy, Cook joined the Royal Navy in 1755. He became Master of HMS Pembroke in 1757. In 1759, he charted the St. Lawrence River in preparation for the siege of Quebec. During which war did this take place?

The Seven Years' War is often called the French and Indian War in America. It lasted from 1756-1763. Cook had to re-chart and buoy the St. Lawrence so attacking ships could safely reach the landing point. This was done over several weeks and often at night within range of French guns. Once this task was completed, more than 200 ships led by General Wolfe made it safely to Quebec City and attacked. The English won the battle of the Plains of Abraham and eventually the war.

For this accomplishment, James Cook became known as the "Master Surveyor", and his charts of the St. Lawrence and the coast of Nova Scotia were the standard for over a century. In the mid to late 1700s, the "Master" was a non-commissioned officer who sailed the ship and supervised Petty Officers and Midshipmen. The Captain was in command of the entire ship and of any soldiers on board.
3. Following the Seven Years' War, Cook returned to North America with new orders in 1763 as Master of the schooner Grenville. He spent five seasons surveying and charting the whole of which Canadian island for the first time in history?

These were important years for Cook as he perfected his skills as a cartographer. Michael Lane assisted Cook in this endeavour. Two small islands off the southeast coast, St. Pierre and Miquelon, were also charted by Cook. These islands remained under the control of France after the Seven Years' War.

Cook's maps of Newfoundland were published in 1775 and were extremely accurate. They included soundings and anchoring points. He anglicized place names and gave names to places which had not yet been seen. Surveys more detailed than Cook's would not come until more than a century later.
4. James Cook was killed in Hawaii in 1779. How and where did his son, James Cook, Jr., die?


Answer: Shipwrecked and drowned off the Isle of Wight

James Cook Jr held the rank of Commander aboard the sloop Spitfire in the Royal Navy. In January of 1794, he was returning from shore leave in an open boat. It capsized during a storm and his body was recovered off the Isle of Wight.
5. In 1768, James Cook was promoted to the rank of Lieutenant and commanded the HM Bark Endeavour for the first of three voyages he would make to the Pacific Ocean. What was the mission of this historically important first voyage (1768-1771)?


Answer: To observe the transit of Venus across the Sun

The Royal Society wanted to observe the transit of Venus in hopes of determining the distance from Earth to Venus as well as the Earth's distance to the Sun. The Royal Navy, in secret, wanted Cook to search for Terra Australis or the Great Southern Continent. No one had ever been there or seen it, but the Admiralty believed it existed and wanted to exploit this mythical fertile land. Cook witnessed the transit of Venus at Tahiti on the 3rd of June, 1769. He did not find Terra Australis.

The transit of Venus occurs in a pattern that repeats every 243 years, with pairs of transits 8 years apart separated by gaps of 121 years and 105 years. During these times Venus can be seen moving across the Sun. There was a transit of Venus in 2004 and will be again on June 6, 2012. Percautions need to be taken while viewing as it is seen during an eclipse.
6. James Cook made many discoveries during his first voyage to the Pacific which lasted nearly three years. Which island nation was he the first to circumnavigate and chart in under six months?

Abel Tasman first discovered New Zealand in 1642 but did not land or circumnavigate the islands. It was thought to be a continent until Cook disproved this theory. He also was the first to discover Cook Strait, showing that New Zealand consisted of two large islands. His charts of over 2400 miles of New Zealand coastline in under six months from October 1769 to March 1770 contained only minor errors which were discovered much later.

Cook's encounter with the Maori people did not go well although he did manage to trade with them a little. Small fights erupted and a few Maori were killed. Cook himself regretted these incidents. Cook would visit New Zealand twice more, once in 1773 during his second voyage and again in 1776 during his third voyage.
7. In April of 1770, James Cook and his crew saw the east coast of Australia. What name did he give to his landing spot?

Cook had originally named the landing place "Sting Ray Harbour", after his crew saw and caught stingray there. He changed the name to "Botany Bay" after the scientists he had on board collected many new samples of plants. Point Hicks is the name Cook gave to the spot on the Australian coast that was first seen by a crewman, Lieutenant Hicks. Poverty Bay and Cape Farewell are names Cook gave to spots in New Zealand.

Cook was the first to map the east coast of Australia and also claimed the land for King George III, naming it "New South Wales". His dealings with the people went much better in Australia than in New Zealand. The Endeavour struck the Great Barrier Reef in June. It took seven weeks to repair the ship before they could begin the journey home.
8. James Cook was promoted to the rank of Commander and his second voyage (1772-1775) was spent searching for the Great Southern Continent. The Endeavour was deemed to be unfit for further service. What ship did he command from this point through to the end of his third voyage?

Cook sailed further south than anyone in history searching for the Great Southern Continent. He didn't find it, but did prove that there was no fertile land to make use of or colonize. This continent turned out to be Antarctica, which wasn't discovered until 1820.

During this voyage, Cook discovered and named Norfolk Island, New Caledonia, New Hebrides (now Vanuatu), the South Georgia Islands and the South Sandwich Islands. He made several charts and along with the scientists aboard, brought back new information about plant and animal life in addition to scientific knowledge that was previous unknown.

The HMS Bounty was commanded by William Bligh who served under James Cook on the third and final voyage to the Pacific. HMS Victory was Admiral Nelson's flagship and Charles Darwin travelled the world in the name of science on the HMS Beagle.
9. After the second voyage, James Cook was promoted to Captain and was made a Fellow of the Royal Society. He was an given honourable retirement and a post at Greenwich Hospital. This retirement lasted less than one year. What brought Captain Cook out of retirement to sail on his third voyage (1776-1779)?


Answer: The search for the Northwest Passage

The British Admiralty had a long standing reward of 20,000 pounds for the discovery of the passage. Cook made a west-east attempt to find the passage. He travelled up the Canadian coast to Alaska, eventually reaching the Bering Strait. He mapped the entire coastline as he went starting at Nootka Sound in Canada.

The sheer mass of ice in the Bering Sea forced him to turn back, unable to pass beyond 70 degrees North latitude or reach the Arctic. The Northwest Passage was not successfully navigated until 1906 by Roald Amundsen of Norway.
10. In January 1778 Captain Cook and his crew became the first Europeans to see the Hawaiian Islands. Sadly, he was killed in a skirmish with the people of these islands on February 14, 1779. What name did he give the archipelago when he first discovered it?

Cook named the islands after the fourth Earl of Sandwich, a close friend and First Lord of the Admiralty. He first saw the islands on his way to the Northwest Passage in 1778. He came back in 1779 to supply the ship. His first encounter with the people of Hawaii was good as trading went well and friendly relations developed. When Cook left the islands one of the masts broke and he was forced to return on February 11th. It was during this repair time that the islanders began to steal from Cook's ship and the tension started mounting. Cook himself was ashore when his men were forced to fire their weapons on the 14th. Badly outnumbered, James Cook and four of his men were killed before they could return to the ship.

Captain Cook's legacy is a great one. His accurate charts and surveys of land and waterways were major achievements. He was the first European to have extensive dealings with the people of the Pacific and the first to discover many islands. There are many places, particularly in Australia that still bear the name he gave them. Numerous places have been named after him, notably Cook Islands, Cook Strait, Cook Inlet in Alaska and Mount Cook in New Zealand. Great Britain, Australia, New Zealand, Canada and the United States have all issued stamps with Cook's likeness at some time.
Source: Author johnnycat777

This quiz was reviewed by FunTrivia editor bloomsby before going online.
Any errors found in FunTrivia content are routinely corrected through our feedback system.
Most Recent Scores
Dec 29 2022 : Guest 78: 2/10
Dec 17 2022 : emmal2000uk: 4/10 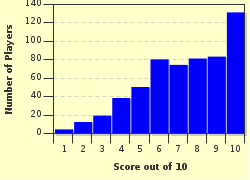 Related Quizzes
This quiz is part of series Explorers:

Those daring and courageous enough to travel the globe.


Other Destinations
Explore Other Quizzes by johnnycat777