Much has been written about the important people in the Bible, but here is a quiz about the creatures that played significant Biblical cameo roles. References are from the KJV Bible.

According to the Book of Exodus (8:2-14), frogs were the second of ten plagues which were brought upon Egypt because of the Pharaoh's refusal to set the Hebrews free from bondage. Whilst the frogs were said to have covered the land of Egypt, they didn't really do much except get underfoot, although they did cause a mighty stench after they died.

This is the only story of the Old Testament in which frogs play any role.
2. The Book of Judges tells us that Samson overcame a lion with brawn and bare hands, but what kind of creatures did he cunningly use to destroy the Philistines' crops by attaching firebrands to their tails?

In Judges 15:4-5, we read that Samson caught three hundred foxes, then "turned tail to tail, and put a firebrand in the midst between two tails". He then set the brands on fire and let the foxes run into the cornfields and vineyards of the Philistines, destroying them.

The Hebrew word for fox also means "burrower", while the Greek word for fox ("alopex"), as used in the New Testament, also means "a sly or crafty man". In Ezekiel (13:4), the false prophets of Israel are likened to foxes. The species of fox which inhabited Biblical lands was the Syrian fox.
3. According to the King James Bible, what kind of birds did the Hebrews eat while wandering in the wilderness?

Exodus 16:12-13 simply says that quails were provided in response to the murmurings of the Israelites in the wilderness. Numbers 11:31-33 further states that a wind brought so many quails that the fewest anyone caught was 10 homers (1 homer = 220 litres), and that the people were punished with a great plague for eating the quails.

This is the only story in the Bible in which quails play any role.
4. The Gospels say that John the Baptist used camel hair for clothing, but what insects did he consume in place of meat?

Mark 1:6 and Matthew 3:4 state that John the Baptist lived on locusts and wild honey while he was preaching in the wilderness. Leviticus 11:22 says that the eating of locusts, beetles and grasshoppers was quite acceptable as a Jewish meal, although things like snails were considered a dietary abomination. Locusts were one of the ten plagues brought upon Egypt, and are mentioned elsewhere in the Bible as a creature which devours the land.
5. According to the Bible, what kind of animals died in the waters of the Red Sea after Moses and the rest of the Israelites had safely crossed over?

The Book of Exodus says that after the Israelites had crossed between the parted waters of the Red Sea, the walls of water came crashing back down and swamped the Egyptians, who had been in pursuit with their many chariots and horses. Deuteronomy 11:4 specifically states that the horses, along with the Egyptian army, died in the waters. Most of the references to horses in the Bible relate to their role in warfare, and chariots are usually mentioned in conjunction with them.
6. In the Book of Judges, what kind of insects took up residence in the carcass of the lion which Samson had killed?

Judges 14:8 describes how Samson returned to Timnath to take one of the daughters of the Philistines as his wife, when he found that the body of the young lion he had previously killed with his bare hands now had a swarm of bees inside which had made honey. Samson ate and took some of this honey, and later based his riddle to the men of the city on the event: "Out of the eater came forth meat, and out of the strong came forth sweetness". Bees are mentioned only four times in the Bible, although honey is frequently mentioned.

The name Deborah means "bee" in Hebrew.
7. According to the Gospels (King James Version), what kind of creature made a noise when Peter denied any association with Jesus?

In each of the Gospels, Jesus predicted that a cock (rooster) would crow after the third time that the disciple Peter denied knowing him. After Jesus was arrested, Peter was questioned by the authorities about his involvement, and he made three denials, after which a cock crowed as predicted (note: in the Gospel of Mark, the cock crowed twice - once during, and once after the denials).

This is the only story in the Bible where a rooster is mentioned.
8. In the Bible, we read that some naughty children teased the prophet Elisha about his bald head. Suddenly, some animals came out of the woods and ate 42 of the youngsters. What kind of animals were these?

We read in 2 Kings 2:24-25 that Elisha was travelling to Bethel when some children from the city came out and mocked him, mentioning his bald head. Elisha turned and cursed them in the name of the Lord, whereupon two female bears came out of the woods and devoured 42 of the children. Perhaps not surprisingly, there is no further record of Elisha cursing anyone. Bears do not figure in many other stories of the Bible, but where mentioned, the type of bear in question was probably the Syrian brown bear, the range of which still incorporates a large area of the Middle East.
9. In the Book of Daniel, the faith maintained by Daniel spared him from being eaten by what kind of animals?

This is the story of Daniel in the lions' den (Daniel 6:4-24), where King Darius the Median was tricked by his courtiers into sending Daniel into a den of lions as a punishment for praying to God. Because of Daniel's faith, however, God prevented the lions from harming him. Daniel's accusers weren't so lucky when Darius sent them and their families into the lions' den. Lions were once common in the region of Palestine, and they are mentioned numerous times in the Bible, often as a metaphor for strength.
10. According to the Book of Acts, what type of creature bit the Apostle Paul when he was on the island of Melita?

Acts 28:3 tells us that Paul, after being shipwrecked on the island of Melita, gathered some sticks to put on a fire, when a viper came out from them and fastened onto his hand. The locals thought that he would surely die, but he shook the snake onto the fire and was unharmed. Snakes (serpents) play an important role in a number of Bible accounts, including the temptation in the Garden of Eden, Aaron's demonstration to Pharaoh of turning rods to serpents, and God sending fiery serpents to bite the Israelites when they were in the wilderness.
11. The Bible tells us that the queen of Sheba came to Jerusalem to visit King Solomon, but what kind of animals are said to have accompanied her?

In 1 Kings 10:2 we read that the queen of Sheba came to Jerusalem with camels bearing spices, along with much gold and precious stones. She had heard of King Solomon's great wisdom, and wanted to prove him with questions. Camels are mentioned many times in the Bible, but mostly as a commodity or beast of burden.

In the Gospels, Jesus referred to this animal by saying, "It is easier for a camel to go through the eye of a needle, than for a rich man to enter into the kingdom of God."
12. In the Book of Genesis, Abraham was about to slay his son Isaac as a sacrifice to the Lord, but an angel stopped him at the last minute. An animal that was stuck in a nearby thicket was sacrificed instead. What kind of animal was it?

We read in chapter 22 of Genesis that, by binding his son, placing him upon a sacrificial altar and taking hold of a knife in preparation to slay the lad, Abraham had proven that he was loyal to the word of God. Thus, his hand was stayed, and a ram that was caught by its horns in a thicket was sacrificed as a burnt offering instead.

As outlined in Leviticus, the ram was favoured as an animal of Jewish ritual sacrifice, along with bullocks, turtle doves, pigeons, and lambs.
13. The Gospels say that Jesus drove some evil spirits into some animals which then ran into the sea and drowned. What kind of animals were these?

Mark 5:13 tells us that the "unclean spirits" which had possessed a man of Gadarenes were driven out by Jesus and entered a herd of about two thousand swine which then ran down a hill and drowned in the sea. Because it was seen as an "unclean" animal, and one considered unfit to eat, the pig was not highly regarded in Jewish culture.
14. In the Book of 1 Kings, what kind of creatures kept the prophet Elijah alive by bringing him bread and meat when he dwelt by the brook of Cherith?

It was a time of drought when Elijah received word from God that he should dwell by the brook of Cherith and that ravens had been commanded to bring him bread and meat, which they did each morning and evening (1 Kings 17:2-6). A raven also played a part in the story of the Biblical Flood, where it was the first bird sent out from the ark by Noah to see if there was any dry land.

The Book of Leviticus describes the eating of birds of prey such as the raven as an abomination.
15. According to the Book of Exodus, which animal provided the blood that was used to make a sign which spared the Hebrews from God's wrath in Egypt?

In chapter 12 of Exodus, God asked Moses and Aaron to tell their people that the blood of a lamb must be struck against their door posts and lintels so that their houses would be "passed over" and spared the plague which would strike down the first-born of the Egyptians.

This is the origin of the Jewish festival of Passover. The lamb was an important symbol for the Jews, who were originally a pastoral people. It represented meekness, and submission to God and to elders. In scripture, the faithful are sometimes compared to lambs in a flock under the stewardship of a shepherd.
Source: Author Wizzid 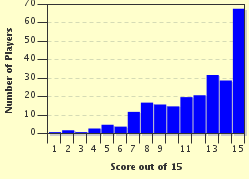 
Other Destinations
Explore Other Quizzes by Wizzid