Love and Hate and War and Peace Quiz

The Old Testament is a land of extremes - if all's fair in love and war, these stories have plenty of great battlefields to go around!

Quiz Answer Key and Fun Facts
1. One prime example of love in the bible is that of Ruth and Naomi, depicted here in this 1860 Simon Simeon piece. Naomi led Ruth to Boaz, an Israelite man who took in Ruth and aided in her conversion to Judaism. Who is the baby of Ruth and Boaz, shown here in Naomi's arms (who ended up being King David's grandfather)?

Obed, Ruth's son, is father of Jesse, father of David. Ruth is one of two biblical women to have her own book (Esther is the other), and her loyalty to Naomi arguably led to the lineage and existence of the great King David in the biblical account.
2. Switching from love to hate, here we see Damiano Mascagni's 1602 painting showing a central figure about to be sold into Egyptian slavery by his jealous, hateful brothers. At least eight brothers are shown in the image - who is the unfortunate central figure?

Joseph, the son of Jacob and Rachel, was favored of his father and had prophetic dreams that showed him exalted above the rest of his family. His brothers were jealous of him and thought to kill him, but Reuben, the oldest of them, changed course and instead led Joseph to enslavement in Egypt under master Potiphar. All of the events took place in Genesis.
3. The third item on our list is war - Saul fought the Philistines in the book of Samuel, all the while raging against David, one of his greatest soldiers. In this image (a Julius Schnorr von Carolsfeld painting), David is about to flee and takes leave of his closest friend for the last time. Who is the person David is embracing here?

Jonathan is Saul's son, and his close relationship with David causes much tension in the royal house. Both Jonathan and Saul fall in the war with the Philistines, which allows David to return and be Israel's hero and future king.
4. To discuss a brief moment of peace in the old testament, let's turn to King Solomon. Here in this painting by Raffaello Sanzio da Urbino he is shown greeting a visitor who was enticed to his court by talk of the prosperity of his nation. Who is she, who famously traded opulent gifts with the king?

The Queen of Sheba had heard of Solomon's wisdom and wealth, and was duly impressed when she actually arrived at court (in 1 Kings), which lived up to report. She expressed an admiration for Solomon and his god.
5. Back to love and the exciting King David. King David is the figure descending from the window in this painting by Gustave Doré, with his new wife is aiding in his escape from King Saul. Her love for him started out very passionate - which of his wives is this who helped him make this escape?

Michal was the daughter of Saul and David's first wife and reigning Queen. Her love for him (just like her brother Jonathan's) was a major point of contention in her family. Soon after her marriage, she heard that her father was aiming to kill the young hero or otherwise dissolve the marriage, and she helped David escape the threat.

She is the only woman in the Bible stated to have loved a man, but David is not stated to have loved her. This incident comes to us from the book of Samuel.
6. Another painting of David by Peter van Lint shows a biblical instance of hate by the same wife who loved him enough to save him from Saul. Here, once he has become king, he danced in the streets before the Ark of the Covenant while his wife in the upper right corner "despised him in her heart". She despised not only the vulgar dancing, but what other action that she accused him of?


Answer: Uncovering himself before female servants

Queen Michal confronted David about his unkingly activities in 2 Samuel, saying that he uncovered himself in front of female servants during his dancing. David's dance was to celebrate the return of the Ark from Judah, and his rejoinder to Michal was simply to state that God had favored him over her house (the House of Saul), and it may be implied that he and Michal did not have a physical relationship after this time, since it simply states that due to this confrontation Michal "had no children to the day of her death" (2 Samuel 6:23).
7. Another Biblical instance of war was Nebuchadnezzar sacking Jerusalem in the book of Jeremiah. This painting by Nicolas Poussin shows the destruction of the temple. Which subsequent book of the Bible portrays the mourning period of the residents of the city?

Lamentations, once attributed to Jeremiah, is a book responding to the destruction of Jerusalem. Now the book is often attributed to a collection of people as the response to the destruction is so widespread.
8. To switch back to peace, you can't get more peaceful than the Garden of Eden itself. This Lucas Cranach the Elder painting shows Adam and Eve near a very important tree - which one?


Answer: The Tree of Knowledge

The Tree of Knowledge is of course the famous tree that God forbids Adam and Eve to eat from in Genesis. This is a piece of a larger painting that shows many episodes of the story, and this particular piece has two - Eve accepting the fruit from the serpent, and Adam accepting the fruit from Eve.
9. Back to love - this image from a compilation of Bible stories by P. de Hondt shows Abram departing from Haran for Canaan, along with a nephew of his, who he so loved that he bargained with God to spare this nephew's life at a later date. Who is it whose life Abram (later Abraham) would pray for?

Lot is Abraham's nephew who later on in Genesis ended up at Sodom. Abraham bargained with God to keep the city's good citizens alive rather than destroy the entire populace. God only found Lot's family among the good and the rest were killed in the destruction.
10. This Jan Steen painting brings us our last instance of Old Testament hate - the woman in the foreground is Esther and the man standing behind the table her husband Ahasuerus, but who is the reclining man in the foreground chair, whose hatred sets the plot moving in the book of Esther?

Haman, the cruel courtier of Ahasuerus (Xerxes), is enraged at Mordecai's failure to bow to him. This leads to him demanding the deaths of all Jews, but Ahasuerus' wife is actually Mordecai's cousin and a fellow Jew. The book ends with Haman being discovered as a cruel, wrongheaded conniver, and Esther wins the day. The events in this book are celebrated with the Jewish holiday Purim.
Source: Author merylfederman 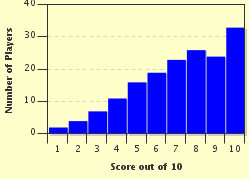