This quiz takes a look at ten different books in the Old Testament. Your challenge is to correctly match the book with the statements made at the left of the screen. Keep smiling and may God bless.

Quiz Answer Key and Fun Facts
1. Find the match for the Old Testament book that tells of Joseph being betrayed by his brothers and sold into slavery.

The betrayal of Joseph by his brothers constitutes a major portion of Genesis, the first book of both the Hebrew Bible and the Christian Bible. According to Scripture, he was sold as a 17-year-old to Midianite traders for twenty pieces of silver. After being taken to Egypt to serve as a slave, Joseph would end up in prison, falsely accused of attempted rape. Miraculously, he would ascend to become the second most powerful person in Egypt, surpassed by only the Pharaoh. Joseph's story can be found in Chapters 37 through 50.
2. Find the match for the Old Testament book that tells of the exploits of Samson.

The exploits of Samson are documented in Judges, notably Chapters 13 through 16. Samson, of course, was the super strong judge of Israel who was betrayed by his Philistine lover Delilah. According to Judges 16:31, Samson served as a judge of Israel for twenty years.
3. Find the match for the Old Testament book that tells of David and Bathsheba committing adultery.

David's name is found in a large number of books in the Old and New Testaments, However, details about him committing adultery with Bathsheba appear in only 2 Samuel. According to Scripture, David had an adulterous affair with Bathsheba while her husband Uriah was away at war.

When Bathsheba became pregnant as a result of the relationship, David ended up orchestrating Uriah's death. Bathsheba would become David's wife and her son Solomon would eventually replace David as king. In other words, Bathsheba would become the Queen Mother, making her the most powerful woman in Israel at the time.
4. Find the match for the Old Testament book that tells of Shadrach, Meshach, and Abed-Nego being tossed into a fiery furnace.

Details are found in the book of Daniel about Shadrach, Meshach and Abed-Nego being tossed into a fiery furnace by Nebuchadnezzar. The three men were put into the furnace after the king learned they had refused to bow down and worship an image of gold he had made that measured ninety feet high and nine feet wide, according to the third chapter of Daniel. According to Scripture, the furnace was so hot the flames killed the soldiers who were attempting to take Shadrach, Meshach and Abednego to their doom. However, the trio was not harmed by the immense heat, and Nebuchadnezzar, after seeing a fourth men in the furnace who looked like "the Son of God", ordered their release. The story ends with the king singing the praises of "the God of Shadrach, Meshach and Abednego, who has sent his angel and rescued his servants!" The three men, according to Scripture, were subsequently promoted by the king.

Daniel, a friend of the three men, assumed the name Belteshazzar while the three other Jewish men were re-named, as per Daniel 1:7. As a result, Hananiah became known as Shadrach while Mishael became known as Meshach and Azariah as Abed-Nego.
5. Find the match for the Old Testament book that states in the NKJV, "A continual dripping on a very rainy day and a contentious woman are alike."

The verse in the question comes from Proverbs 27:15. To put the verse in context, here's how Verses 15 and 16 read in the NKJV, "A continual dripping on a very rainy day
and a contentious woman are alike; whoever restrains her restrains the wind, and grasps oil with his right hand."

Solomon is credited with writing most of Proverbs.
6. Find the match for the Old Testament book that states, "To everything there is a season, a time for every purpose under heaven."

Ecclesiastes is the correct answer with the verse found in Chapter 3, Verse 1. The words from the first eight verses of Chapter 3 comprise the lyrics for the song 'Turn, Turn, Turn (to Everything There is a Season)' written by Pete Seeger, and popularly performed by The Byrds, an American band.

According to Wikipedia, the song hit Number 1 on the Billboard Hot 100 chart and Number 26 on the UK Singles Chart. The song was popular for a number of reasons, not the least of which was it struck a chord with a world which was desperately seeking peace at a time when the War in Vietnam was dominating the headlines and newscasts of the day. According to Wikipedia, the song was first released by the folk group The Limeliters on their 1962 album 'Folk Matinee'. Wikipedia reports Judy Collins also released a version of the song in 1963. However, the version by The Byrds would prove to be far and away the most successful.
7. Find the match for the Old Testament book that has a chapter that begins by stating, "The LORD is my shepherd."

Psalms is the correct answer with the verse being the first line of Psalm 23, arguably the most famous of the 150 Psalms in the Old Testament. Psalm 23 was written by David and is known as 'The Lord is My Shepherd'. In the Psalm, David likens the LORD to a shepherd, taking loving care and offering total protection to His flock.
8. Find the match for the Old Testament book that tells of Vashti being dumped as queen.

The account of Vashti being dumped as queen by Ahasuerus, king of the Persian empire, is found in the book of Esther. (In the NIV, Ahasuerus is known as Xerxes.)

Vashti was deposed after she refused a request of the king to appear before a banquet and show her beauty. The king opted to depose of her after consulting with his wise men. The feeling was if she wasn't deposed, other women in the kingdom would be disobedient to their husbands.

I really like Vashti as she is a person who stood on her principles regardless of the consequences. She was the first women's libber. In my opinion, she should be looked upon as a heroine in Scripture. After all, her disobedience played a role in saving the Israelites from mass genocide because after she was deposed, Esther ascended to the throne. If Vashti hadn't taken a defiant stand, it was unlikely Esther would have become queen. Unfortunately, after Vashti is deposed, she is never again mentioned in Scripture.
9. Find the match for the Old Testament book that tells of a man losing his seven sons and three daughters when a windstorm destroyed the house they were in.

Job lost his seven sons and three daughters when a windstorm toppled the house they were in and killed them, according to Job 1:18-19. On top of this, Job found himself in failing health and lost all his material wealth, Scripture states.

The book of Job has a happy ending, however, with Job 42:12-17 telling of the LORD blessing him immensely.
10. Find the match for the book that appears second last in the Old Testament of the Christian Bible.

Many Christians believe the book of Zechariah contains a number of prophecies pertaining to the Lord Jesus Christ. According to notes in the NKJV Study Bible, passages such as 9:9-10, 11:11-13, 12:10 and 13:7 are all in reference to Christ. Meanwhile, it is believed by many Chapter 14 prophesies about Jesus coming as a "Judge" and "righteous King."
Source: Author Cowrofl 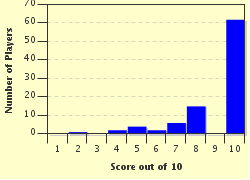