For the Bible Tells Me So Trivia Quiz

This is a quiz on some of the most well-known stories and elements contained in the Bible. Do you think you know them? You're in for a surprise.

Quiz Answer Key and Fun Facts
1. The whole mess that we call "life" started when Adam and Eve ate a forbidden apple after being tempted by Satan. The Bible says so.

In the beginning, Adam and Eve lived in a garden of bliss, never having to toil away at anything or feel any burdens in life. That all changed when a serpent tempted them into eating a forbidden fruit, and things just went downhill from there. But the Bible never mentions what sort of fruit they ate.

The origins of the connection to an apple are uncertain. It may have been from the similarity of the Latin words for apple and evil, or simply out of need to picture a fruit in artistic representations.

The serpent that tempted Adam and Eve is often interpreted to be Satan, but the Bible does not say this. Genesis 3:1 describes the serpent as "more crafty than any beast of the field which the LORD God had made," which pins the serpent as one of the animals that God made.
2. The angels described in the Bible do NOT take the appearance of which of the following?

There are plenty of angels mentioned in the Bible, and they're all incredibly creepy. Ezekiel 1:16 describes a vision of angels that appeared to be wheels within wheels that are covered in eyes. The four-faced (human, ox, lion, and eagle) angels can be found in Ezekiel 10, where verse 14 calls them cherubim. (Yeah, that's probably not how you picture a cherub.) Revelation 4:8 describes six-winged angels full of eyes, while Isaiah 6:2 names six-winged angels as seraphim.

The earliest depiction of an angel with wings comes from around 400 AD and was found in Istanbul. Since then, angels have been been shown with wings and halos. Medieval art drew heavily from Byzantine art, and solidified the images of angels we know so well. By the time of the Renaissance, angels had been well-portrayed as what we think of as angelic.
3. As seen in Exodus 34, which of the following statements is listed among those that are called the Ten Commandments?


Answer: bring the best of your first fruits to the Lord

The Bible says that God gave Moses two stone tablets with the words that he spoke to the Jews from Mt Sinai. Moses broke the original tablets, but a replacement was made. So what's the catch? Well, a list of commandments appears three times in the Bible, in Exodus 20, Exodus 34, and Deuteronomy 5. Those that are listed in Exodus 34 are the only ones actually called the Ten Commandments.

Exodus 20 lists fifteen imperative statements. There are at least eight different religious traditions for splitting and numbering them as the "ten" commandments that you're likely familiar with, and numerous further commandments are listed in addition to those afterwards.

Exodus 34:10-26 lists the actual Ten Commandments, but you would probably not recognize most of them. The commandments listed there include bringing the best of your fruits to the Lord, redeem the firstborn donkey with a lamb (otherwise, you should break its neck), and all men must appear three times per year before the Lord.
4. The single biblical mention of Lucifer makes it clear that it is another name for which biblical character?

The name "Lucifer" gained a lot of infamy from its one-time use in the Bible -- and some translations don't even mention that name! Have a look:

"How art thou fallen from heaven, O Lucifer, son of the morning! How art thou cut down to the ground, which didst weaken the nations!" [Isaiah 14:12, KJV]

"How you have fallen from heaven, morning star, son of the dawn! You have been cast down to the earth, you who once laid low the nations!" [Isaiah 14:12, NIV]

Notice the distinct lack of references to Satan. On the contrary, Isaiah 14:4 specifically says that this is part of a taunt meant for the king of Babylon, who at the time was Nebuchadnezzar. Nebuchadnezzar was famous for his ferocity and conquests, which can easily be seen as an attempt to rise to the heavens. The book of Daniel describes how God cut him down like a tree and he lived as an animal for years, a clear parallel to Lucifer's fall from grace. But again, he's not Satan!

(Og and Mahershalalhashbaz are the shortest and longest names in the Bible, by the way.)
5. The Bible goes into great detail about A) the immaculate conception of Jesus B) who was born on December 25, 1 BC C) in a stable that Mary had arrived at riding a donkey D) and was visited by the three kings of the Orient: Balthasar, Caspar, and Melchior. If even one of the above statements is true, vote yes now!

B) The date and time of Jesus' birth is not stated in the Bible. Christians began celebrating it on December 25 as a way of competing with the pagan holiday Saturnalia. The fact that shepherds were tending their flocks at the time suggests that Jesus was not born during winter. The reckoning of Jesus' year of birth was calculated by Dionysius Exiguus, but is known to be wrong. By the calendar that we use, Herod -- who wanted to kill Jesus -- died in 4 BC.

C) While not an outlandish idea, the Bible does not at all explain how Mary and Joseph made it to Bethlehem. Luke states that Jesus was born in a "manger." Nativity scenes commonly depict the scene as being at a stable or barn, but caves were commonly used for housing animals back then. The Bible of course does not say either way.

D) "We Three Kings of Orient Are" is not biblical canon. The Bible states that Jesus was visited by wise men, not kings. They came from the "East," which may or may not be the Orient. And no, the Bible does not say that there were three of them, much less state their names! The Bible only states that they were wise men (that is, more than one) and that they brought three GIFTS with them.

So no, the Bible does NOT go into great detail about the birth of Jesus.
6. The saying "hate the sin, love the sinner" can be traced back to a saying from which of these figures?


Answer: St Augustine, who doesn't appear in the Bible

The world is filled with quotes and paraphrases from the Bible -- as well as quote attributed to the Bible despite having nothing to do with it. "Hate the sin, love the sinner" is one of those things that easily sounds attributable to Jesus, despite the fact that it has nothing to do with him. Around the year 424, St Augustine wrote a letter which included the phrase "With love for mankind and hatred of sins." It's just one of a very long list of misattributed quotes.

At least people aren't attributing it to Mark Twain this time.
7. The cup that Jesus used to serve wine during the Last Supper is called the Holy Grail. The Bible says so.

The cup that Jesus used to serve wine during the Last Supper was never portrayed as anything but an ordinary cup in the Bible. Some people have since designated it as the Holy Chalice, but that's not the same thing as the Holy Grail, and neither of these relics exist in the Bible.

The first known mention of the Holy Grail was by the French poet Chrétien de Troyes around the year 1180. He primarily wrote Arthurian stories, and created the character Lancelot. In his stories, the grail is a bowl that can heal horrific injuries. A few decades later, Robert de Boron decided that the Holy Grail was the cup that was used to catch Jesus' blood at his crucifixion. A few centuries later, Steven Spielberg decided to make an Indiana Jones movie about it, featuring the grail, its healing powers, and a knight who apparently practiced inedia (mystical fasting).
8. During the end of days following the Rapture, the Antichrist will emerge on Earth and (according to the Bible) be readily distinguished by what feature?


Answer: the Antichrist is not described in the Bible

The word "antichrist" appears four times in the Bible, all in the very short Epistles of John. In each case, the word is used as a prefix, in much the same way you would use the word antitank or antiair. The book of Revelation, for all its apocalyptic visions, does not use the word, and there is simply no such character as "The" Antichrist mentioned in the Bible.

The idea of The Antichrist, as a specific person, became very popular in apocalyptic art during Medieval Times. The Second Beast (yes, as opposed to the First Beast) is associated with the number 666 and is sometimes misconstrued as The Antichrist, but both beasts are most definitively unnatural-looking beasts and certainly not human.
9. As told in Revelation 12, Satan will knock down one-third of what from the sky?

Have you heard the story about how when Satan rebelled, he managed to take one-third of the angels with him? Would it surprise you at this point to learn that no, that didn't happen? Revelation 12:4 states that Satan "swept down a third of the stars of heaven and threw them to the earth." Satan was then thrown down to earth with his angels, but how many angels he commanded is not stated.

Oh, and one more thing: this story appears in Revelation. This event hasn't actually happened yet. Revelation is a list of apocalyptic visions that are GOING to happen. In the same chapter, Satan is to pursue a woman who gives birth to a boy who will rule the world with an iron rod. That hasn't happened yet either.
10. Revelation 12 is the only place in the Bible that describes Satan's physical image. How does Satan appear, as described by the Bible?

Revelation 12 includes some interesting things about Satan, including the only biblically-condoned description of the Evil One. Satan is described as a great red dragon with seven heads adorned with seven diadems, and ten horns -- in other words, nothing at all like how he is ever depicted.

Many of the modern features of Satan are believed to have incorporated pagan or polytheistic elements, such as Pan (goat features) and Poseidon (trident/pitchfork). Anytime you see a portrayal of Satan, it really is nothing more than a haphazard collection of vaguely creepy motifs.
Source: Author nautilator 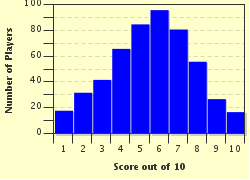 
Other Destinations
Explore Other Quizzes by nautilator